SUMMARY: Adding a copper CPU spacer to protect a fragile AMD CPU makes a lot of sense. However, even though it does transfer heat from the CPU package to the heatsink – it looks like there is little or no net CPU cooling benefit. 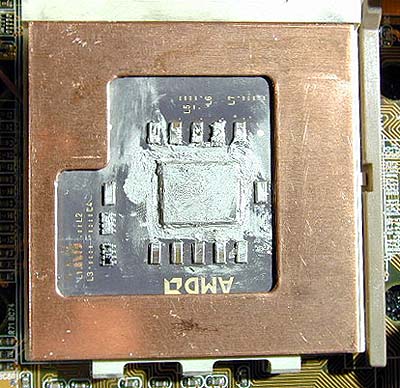 Intuitively, you would think adding a copper spacer of the kind pictured above would add to CPU cooling. Increase the cooling area of the heatsink to the CPU package and it should run cooler. Anything that can help to tame the flaming AMD CPUs has to be a good move.

Curious about what to expect, I bought two copper spacers from Overclockerz Store (no connection to us) for $7.99 each. I had no option but to accept two day shipping on this item for an additional $10.27. Considering you could mail these things first class in a sturdy envelope for under a dollar, I thought the shipping was on the high side.

Anyhow, first thing I did was to “eyeball” the fit – looked like it was a little lower than the CPU core on my Duron 800, so I proceeded to grease it up with a non-silcon grease and slap it on the CPU. I cut off the four rubber feet, placed it on the Duron, fitted the Swiftech MC370-0A, hooked up the heatsink and CPU base thermocouples and fired up the ABIT KT7 (Duron @ 1000, 1.93 v).

First thing I see is the CPU Back temperatures skyrocketing – heading over 100 C! Kill the main power and puzzle over it for a while. Move the heatsink around a bit, squishing it down, and try again: Same thing!

After some ruminating on this, I clean off all the grease and try again. This time, no problem – everything running at tolerable temps. Obvious what happened (now): The grease I used was too thick and lifted the heatsink off the CPU just enough to skyrocket temps.

So I proceeded to run three tests: One without the spacer, one with no grease and one with Arctic Silver on the heatsink side only. I did not put Arctic Silver on the CPU itself as I have had shorting problems doing this. Test were run with the Duron @ 1000 MHz, ABIT KT7, 1.93 v resulting in 52.6 watts. Results:

Interesting! And not what I expected at all! It looks like what we succeeded in doing here was to transfer heat from the CPU package to the heatsink – that’s what I expected. I did expect the CPU’s back temp to be lower and, consequently, MBM temps to be lower also (this is because MBM uses the in socket thermistor which reads CPU back temps, not core).

So far, so good. What I did not expect to see were CPU core temps HIGHER (as measured by the thermistor in the heatsink above the CPU core). In retrospect, however, makes sense: What the spacer does is transfer heat from one source (the CPU’s package) to another (the heatsink). The heatsink is therefore hotter than before (more temp load) and consequently the CPU core is hotter.

Now what’s interesting about all this is that others who have used these spacers and see temps using in-socket thermistors come to the opposite conclusion because they are only looking at one side of the picture – the CPU’s back temp. Let’s face it – there’s no such thing as a free lunch. If you transfer heat from the back to the front, there is very little net gain.

We’ll do some more testing to confirm results.

The moral of all this: Save your money and don’t buy a CPU spacer expecting a temperature benefit. If you want additional cooling, aim some fans at the back of the motherboard. Treat the motherboard like another heatsink and cool it accordingly.

SUMMARY: CPUs are designed to shed heat mostly from the core and a little from the package; copper spacers can adversely impact the CPU’s heatpaths with certain heatsinks, but only minimally.

More than a few folks have expressed an interest in how a copper spacer affects CPU temperatures, so I dug a little deeper into what I think is going on here. Andy Lemont over at Millenium found this little diagram and text from AMD which summarizes CPU Heat Dissipation Paths:

No real surprise here: We all know that the CPU core is where it’s at. However, the CPU package also traps a certain amount of heat (as we’ve seen from measuring back side temps). All things considered, moving heat off the back will cool the CPU core to some degree. Back in the Celeron days, we had “sandwiches” – heatsinks front and back, and they did increase performance.

The problem with expecting a copper spacer to do something similar is that rather than move heat off the back, the spacer is moving heat from the back to the front, thereby increasing the heatsink’s heat load. 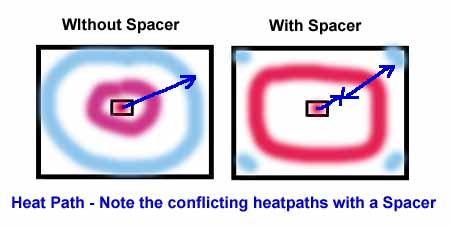 The diagram on the left shows the normal heat pattern on a heatsink’s base. In the center is the hot CPU core. Heat moves from the center to the edges – in effect, the cool edges draw heat from the CPU. No juju here – just straight physics.

Adding a copper spacer interferes with the uninterrupted flow from hot to cold. By introducing a copper spacer, the heatpath now has a second heat source – the spacer. This interrupts the temperature gradient by placing something like a “speed bump” in the road. It’s no longer a smooth path; now there’s a “temperature bump” that slows down the heat flow from the CPU to the edges of the heatsink, as shown in the right hand diagram.

The net effect is to transfer heat from the CPU’s back to the front (good) but at the expense of moving heat unimpeded from the CPU core to the edges of the heatsink (not good).

However, the effect will be more apparent the less effective the heatsink is in removing heat.

In the scheme of things, air cooled heatsinks will suffer the most, followed by water cooling and last by peltiers. The more effective the cooling solution, the less the impact – perhaps to the extent of a clear net benefit resulting in increased performance.

While the delta did increase 0.4 C with the spacer, the overall picture looks better than without the spacer. It looks much better than what we saw with an air cooled heatsink:

In this case, the back temp decrease is almost matched by the increase in CPU temps; not so with water. Steve Foster, who has done a lot of work with peltier cooling, feels that there is a clear advantage with peltiers. I think this is due to the tremendous ability of a peltier solution to absorb heat.

Disclaimer: This is only reasoned speculation. I have no inside information of the doings of any of the companies mentioned and am just making some semi-educated guesses as to what may happen in the future. No guarantees, so if Intel

Disclaimer: No representation is made or intended to express an opinion as to who legally, morally, Biblically, or anything-elsely deserves or is entitled to any land discussed here. The Register reports that Intel’s Fab 18, which is the one responsible

I have an interest in amateur telescope making (ATM), and it interests me to note that the very same process that most people seem to be using to lap their CPUs is the process by which ATMers make parabolic mirrors