What follows is a deliberate attempt to abrade a PIII CPU to its core – in no way will I be responsible for any one who applies this to their own CPU in an attempt to lap a PIII and destroys it.

A few folks asked what was under the flip chip, so I sanded further and found connectors – no resistors, no capacitors, just connectors (pic below). So the dots in the fourth picture are the contact points of the silicon die. On the rear of the Slot 1 flip chip are the discrete components which then connect to the flip chip. 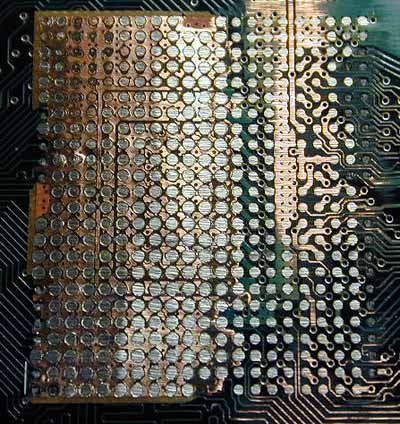 Wei-Min Lee’s PIII Slot 1 600E came to some grief and died on him. After repeated attempts to resuscitate this CPU, it was obvious that it was gone.

Rather than let it go completely to waste, Wei Min gave it to me to play with. Now being the kind of guy who takes apart almost everything I get my hands on, I was itching to see what was inside the chip. I had an ulterior motive – I was curious to see how hardy the silicon substrate is on these chips. 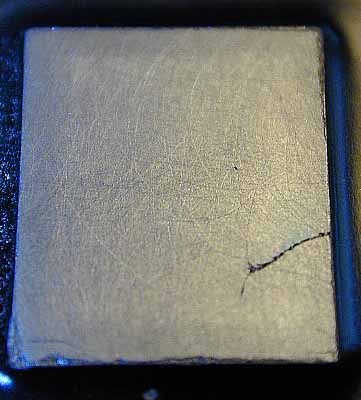 I used 400 grit silicon carbide paper to get things started. Ordinarily, if I were to lap a CuMine, I would start with at least 600 grit, but in this instance I was more interested in what lay below the blue cap. The pic above was after about one minute’s worth of effort. What I found startled me – looks like a crack or flaw in the substrate. I can’t tell you if this was the cause of the chip’s failure because by the time I got it, there were missing capacitors and scratches on the chip, any one of which would render the CPU inoperative.

However, this CPU was super-cooled with a water cooled peltier. I would guess that if this crack was due to super-cooling, it would have shown up in the blue coating as well; it was not visible on the surface. It could be that the crack was there to begin with and the super-cooling, through expansion and contraction, widened it enough to break the chip’s circuitry resulting in the CPU’s demise. I don’t think Intel would pass a CPU with a crack like that, but this is all conjecture on my part. 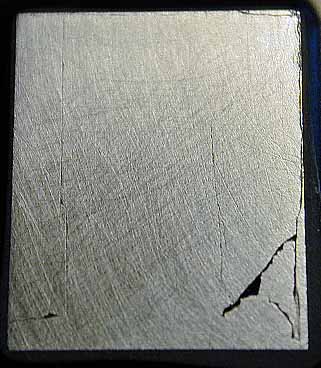 The next pic shows what it looked like after 30 minutes of lapping. Now this was no gentle effort, so the amount of material between the circuitry and the top of the CPU is, relatively speaking, fairly robust. The silicon is also quite hard – I did not wear away that much after all this effort. 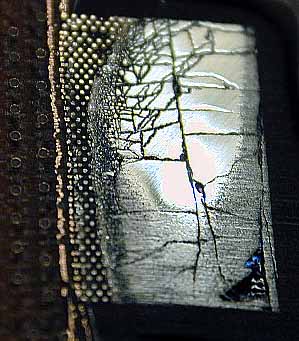 OK – time to speed things up. Hand lapping at this pace would take hours to get to any of the good stuff. Into the basement to use the stationary belt sander. Even using what is an extraordinarily aggressive sanding effort, it took some time to get to the stage in the last pic – about 3-4 minutes. Silicon really is pretty tough material.

I can’t tell you that I saw any real circuitry – I did not expect to see any (no electron microscope in the basement). What I did find interesting are the series of dots along the left side – I’m guessing that these are not just connectors (seems like too many) but discrete circuit elements. Perhaps someone more knowledgeable than I who is looking at this can fill in the blanks.

What I got out of this admittedly drastic exercise is that PIII lapping, at least as represented by this one CPU, is possible; however, I am still not comfortable with it and, as robust as the silicon proved to be, I’m not sure I would recommend it. If you do decide to proceed, I would recommend using at least 600 grit and only polishing away the blue layer on the CPU; there is nothing to be gained after that.

SUMMARY: Intel’s Flip Chip may be a lot more delicate than other CPUs. Thermal and mechanical stress are likely causes of premature CPU failures.

When I went about deconstructing the PIII in Part I, little did I realize that perhaps there is more story here than we thought. Anectdotal evidence is mounting which suggests that the FCPGA is more delicate than previous Intel CPUs; Is Intel’s FCPGA yield problem an indication of this problem?

First, this is Intel’s stated recommendation on Flip Chip mounting:

“Intel recommends system integrators use motherboards with the 370-pin socket for the boxed Intel ® Pentium ® III processor in the FC-PGA package. The motherboard must be validated specifically for the Pentium III processor. However, if you find it necessary to utilize a Slot-to-Socket Adapter (SSA) (see Figure 1 below), please be aware of the following critical considerations:

Adapters or “slockets” that allow Pentium III processors to operate on older motherboards:

Intel Corporation has not validated any such adapters, and does not recommended them since there are physical pin differences in the processors.”

A number of folks who have written to us about FCPGA failures also stated that Intel appears to blame slotkets (among just about everything else) for these failures. Now I will state again that I can not tell you if this is in fact an endemic problem – I can tell you that this is the first time since Overclockers.com started that we are receiving reports of CPU failures. Dan Edgar, one of our editors, has had two failures and is not doing anything extreme.

Based on the emails below, I believe the problem is due to thermal and mechanical stresses which aggravate micro-fractures in the silicon leading to failure. Intel is replacing these CPUs (as they should) with little hesitation. Is this a large problem? Only time will tell if FCPGAs are time bombs waiting to go off.

Emails From Users With Dead CPUs

NOTE: Some have told us that prior to failure, the CPU started to run hotter.

“I find it very unlikely that thermal expansion would damage the CPU (been using a vapo at extreme temps for a long time now (goes from 150 F to -20 F in less than 30 seconds time). Also, something to consider – silica glass (used in automobile windshields) does not crack due to heat variance over years – unless there was a fracture – like a rock. It is possible that the installation could have created ‘sub’ micro-fractures that expanded over time to damage the CPU.”

“I would be willing to bet, if you researched types of heatsinks & hold downs being used, the answer to that would loom within. A really good primary example is that damn retail Intel heatsink. If you’ve tried to strap one of these down, you know exactly what I’m driving at – it damn near takes 2 people to push that spring down to lock!! Also, if you took a cross section of the fracture locations that are popping up, you’ll probably find they are mostly all (if not all) at the right lower corner – precisely where a major force is exerted while latching down these “grossly over-exuberant” hold downs.

Have you seen the literally “bowed” surface on the Intel sinks??? You & I both know it only takes a light to moderate spring tension to hold even a frontal heavy heatsink in place. For those who are attempting to use a heatsink other than an Alpha with “feet”, a perfectly good, stable substitute is to take some 3M # 4026 double sided foam tape, cut (2) 1/4″ squares, then cut each square diagonally to produce (4) triangle shaped pieces.

Stick the already exposed sticky side of each piece in a respective corner of your heatsink & LEAVE THE BACKING ON THE CPU CONTACT SIDE. Position your newly “footed” heatsink onto the CPU & latch it down. This size pieces of this foam tape will compress just enough to allow full contact of CPU/Heatsink, but yet support it at the corners – virtually eliminating the force being applied to the corners of the tender little silicone “woosies”. Hope this helps someone along the way.”

“I just ordered another 550E, and will use the 650 on a non-overclocked computer system where stability is most important. I phoned Intel and they blame Asus, my memory and last but not least the Iwill Slot adapter. Well none of those items are at fault because I already swapped them out to see for sure.”

“So much for Socket 370. I have a BP6 with a 500E (or should I say “had”). Have the Powerleap adapter to run the Flip chip in my dual Celeron board. Chip was a problem from day one; I’d blown up my old Celeron, so I knew the board/card/harddrive combination was working. I put in the 500E – BIOS recognizes it as a 500E but SB Live won’t work in Windows. Kept getting vxd errors. Then it won’t restart. Had to do a cold boot every time.

That was with Powerleap’s fan. I put my Alpha PAL-6035 on there – double checked it and it seemed to seat pretty well. Temp was around 25-27 C. Three hours later it won’t boot at all. Die was chipping away at the bottom right corner. Now it’s not like it was a slotket; the board should’ve helped align the heatsink and we know gravity would have no poor effects. I don’t get it.

I put an Alpha PA-6035 (Socket 370 w/ copper insert) and cracked the die. Just took a little off the corner. Thing was dead from that point on, but it never worked right from the get go. I’m pretty sure it was like that when I got it because I can’t find the pieces that would’ve/should’ve broken off of it.”

“I also had the mis-fortune of having a cracked CPU; this one was a 650E. I really believe it was a combination of: Use of the alpha slot 1 cooler, and also from the Hot to Cold extremes I put the CPU through. I now watercool and have not experienced any problems to date with my newer 650 CPU.”

Stay tuned – we’ll continue to collect as much data as we can. Thanks to all who emailed us with their experiences and thoughts on this.

I know Overclockers.com is listing less expensive CPU’s in the CPU Databases, but seeing that in the near future that P3 450s will drop in price to $248 in lots of 1000 and SSE will be needed in some games,

AM2+ Denebs: Doomed To Die