It has been a while since OCZ released their last enthusiast-level SSD, the Revodrive 350, way back in the spring of 2014. Since Toshiba acquired OCZ in early 2014, they have been working independently as a subsidiary, but switched to using Toshiba internals. Since that time, they have come out with some very good SATA-based SSDs in their Vector and new Trion lines. Fast forward to today and we have in our hands the Revodrive replacement, the RD400 in 512 GB capacity, which promises to be quite a fast drive. Grab a seat and let’s see what the OCZ RD400 has for us!

Below is the specifications table. Here we see the OCZ RD400 comes in four capacities, 128 GB, 256 GB, 512 GB, and 1 TB versus the Intel 750 Series which has three. We know the interface is PCIe 3.1 with the NVMe command. The drive uses Toshiba 15 nm MLC NAND controlled by a Toshiba controller in order to reach its performance numbers. The form factor is M.2 2280 (80 mm length) for just the “stick.”

Performance for the 512 GB drive we have in hand comes in at 2600 MB/s reads and 1600 MB/s writes on paper. IOPS for the drive come in at 210K/130K reads and writes respectively. This on paper performance is right up there with the Samsung 950 Pro. Smoking!

Listed below are a few features from the OCZ website. We know the drive is NVMe based which allows for the smoking speeds across the PCIe bus which easily eclipses SATA bandwidth limitations on traditional SSDs. OCZ uses custom drivers to help reach and maintain its rated speeds. This particular part comes in the M.2 form factor (2280 to be exact, 80 mm long) and comes with a PCIe adapter if you do not have, or do not want to use, the M.2 slot on your motherboard.

A big part of this package is OCZ’s Advanced Warranty Program. We have discussed this in previous OCZ reviews and it doesn’t change here. The story with this is if OCZ determines the drive is bad, they will send you a pre-paid shipping label and cross ship you a brand new replacement by the next business day! Intel or Samsung doesn’t offer such a program. So if you are concerned with a quick turnaround in case your drive fails, you need to look at OCZ drives. As far as the warranty on this particular drive, you are looking five years as is typical with this caliber of drive.

Below we see our first true shots of the drive… at least the packaging anyway. The front of the box shows a picture of the drive in the PCIe AIC along with the OCZ branding/colors on the left hand side. There is a sticker showing the capacity of the device inside while the model is listed on the bottom right. The back of the box shows the usual high-level features and specifications. Inside the retail packaging the “stick” and PCIe AIC sit snug between two pieces of plastic. Included are some instructions as well as the half height bracket for smaller chassis fitment.

The pictures below show both the drive itself and the PCIe AIC. The AIC is a simple device, about a half height PCB, and is jet black. It comes with the full height bracket already installed but you can swap it out with the included half height bracket if you need to. If you do not want or need the PCIe AIC, simply take the stick out and plug it into your M.2 slot.

Here we zoom in on the stick a bit and confirm some high-level details in the Toshiba NAND, as well as the Toshiba branded controller.

In the slideshow below is the updated SSD Utility from OCZ. It still more or less looks the same with the tabbed sections up top, as well as its basic functionality. You are able to read SMART data, benchmark, and secure erase the drive among other things. I did not have any issues using the software.

Benchmark time!!! Our first graph is showing CrystalDiskMark Random Reads (mostly incompressible). The OCZ drive leads the pack hitting 2585 MB/s in the high queue depth run. In regular sequential reads, it was a close second behind the Samsung 950 Pro. 4K shows the drive in a close second again behind the 950 Pro while the high queue depth 4K run again shows the drive leading the pack. In the CDM Writes testing, the RD400 again shows great performance in the 4K Q32RT1, but falls a bit short of the Samsung in the remainder of the testing while still putting up some great numbers. 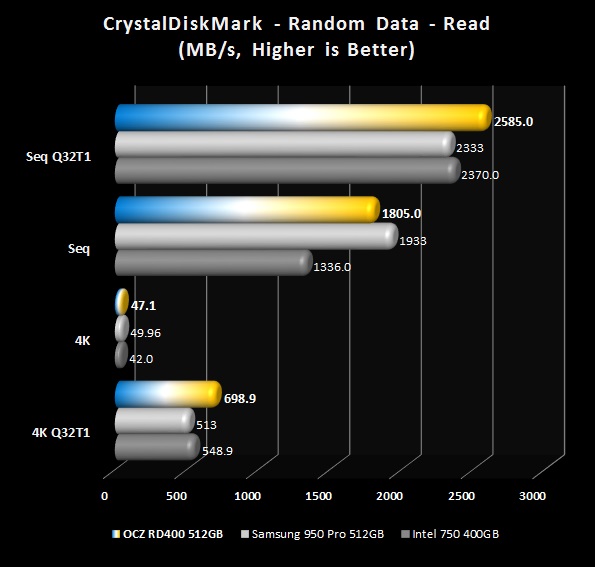 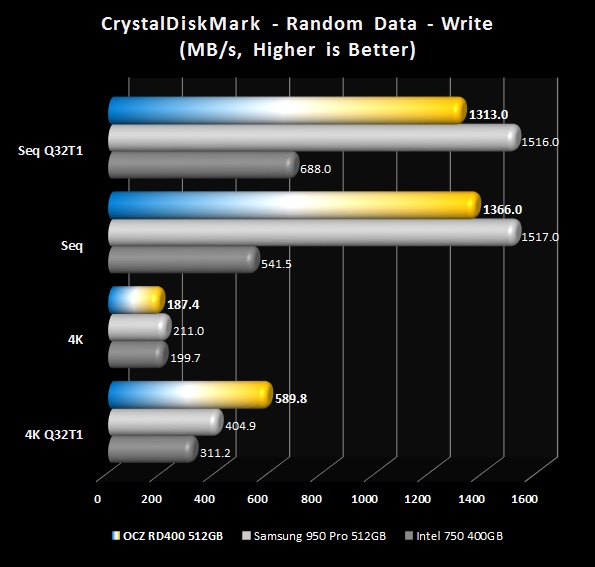 The AS SSD benchmark’s incompressible data gives us a worst case scenario picture. In this test, the RD400 leads the pack in sequential reads and also 4K. In the high queue depth reads though, it surprisingly falls behind both the Intel and Samsung. The write results were all over the place with it performing very well in 4K writes, leading the pack, and coming in slightly behind the Samsung drive in the high queue depth writes, but easily beating the Intel as expected. 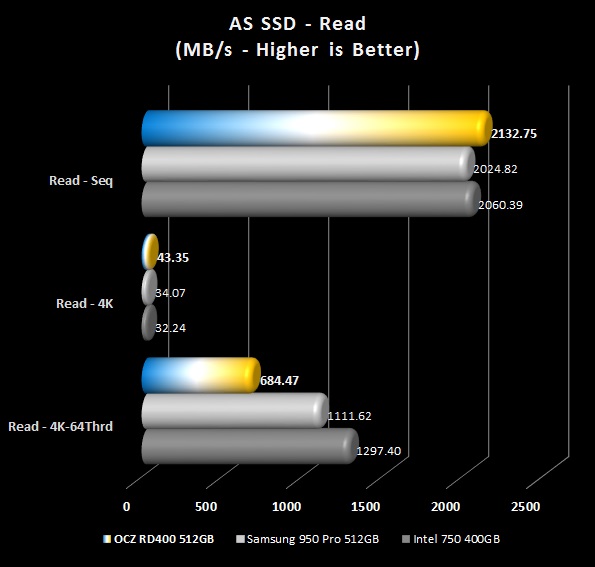 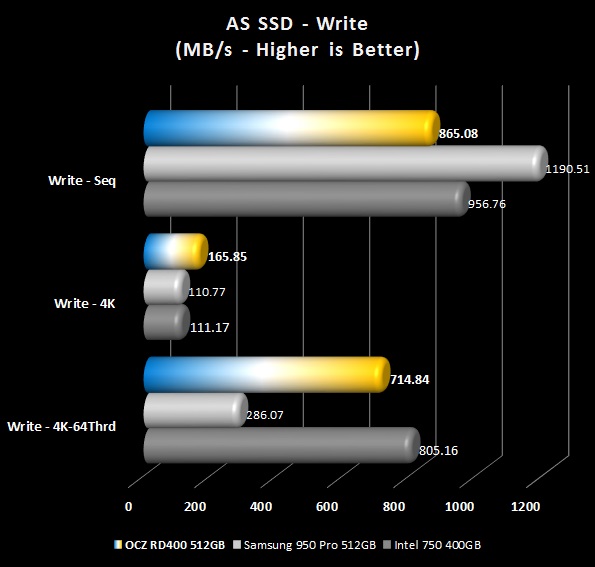 Access times were very good leading in writes and a 100th of a millisecond behind the Intel 750. The overall score was held back a bit by the read performance. It must really weight those high queue depth 4K results. It sure doesn’t feel 50% slower than the Intel, in fact, it doesn’t feel slower at all. Tough to tell between drives that are all so fast. 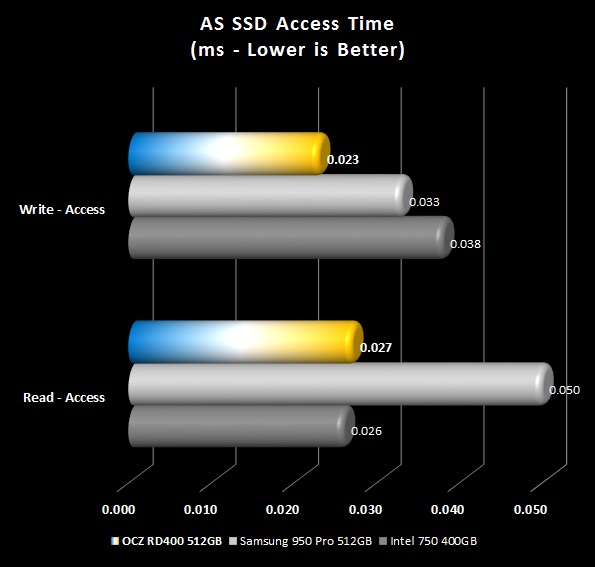 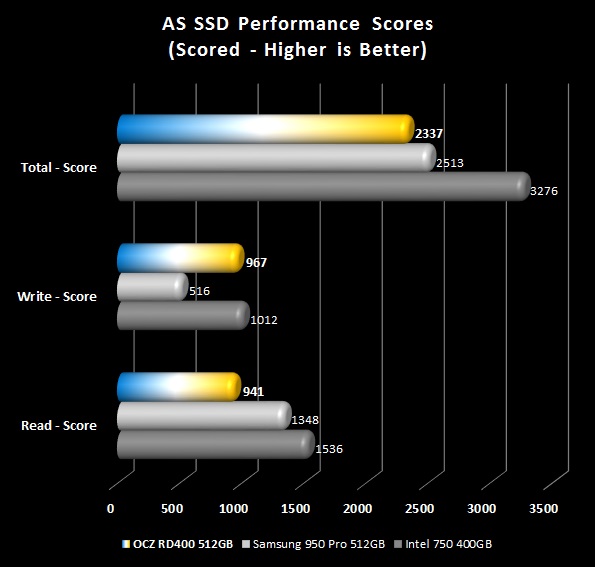 IOMeter results show the RD400 beating the pack out in 2MB reads nearly hitting its rating of 2600 MB/s while coming in 2nd in writes behind the 950 Pro. On the 4K side of things, the results are flip flopped showing the OCZ drive beating out both drives hitting 529 MB/s in writes while going middle of the pack in reads. 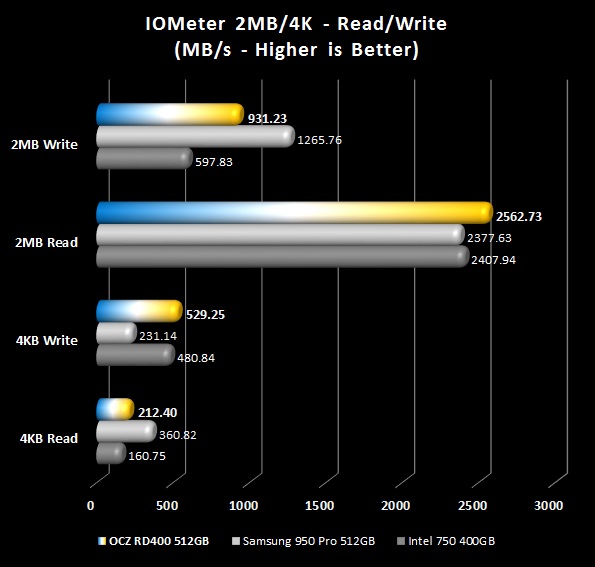 When talking IOPS and looking at the second graph for 4K results, you can see the drive really plugging away just below its rated speeds at 129K IOPS for 4K writes. While reads, it seem to fell woefully short in my testing, but it did beat out the Intel which also fell short. 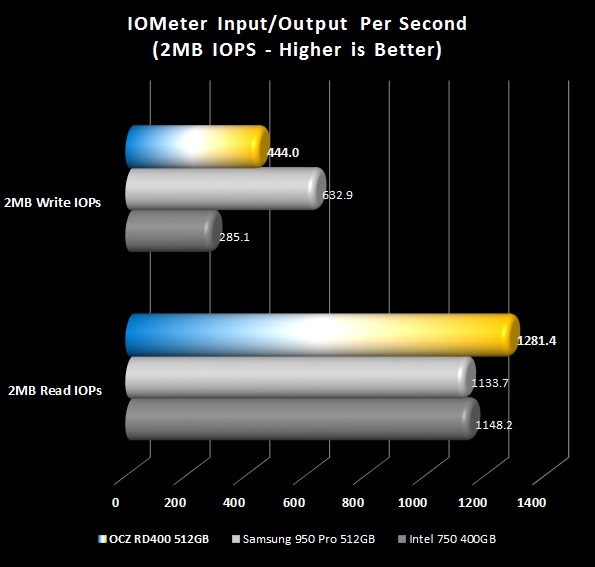 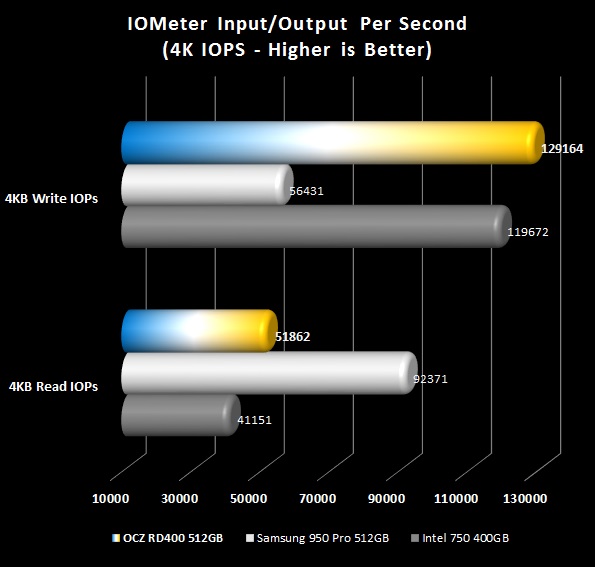 Moving on to ATTO, you can see we changed things just a bit in how we report the data in the graph. This should be more clear to look at now with the bolded values representing the MB/s the drive is putting through. Here we see the OCZ drive ramp up a bit slower at 4K, but hits its stride as the sizes get larger. It peaked higher than any other drive, in fact at nearly 2700 MB/s on 1MB and 4MB sizes. When we take a look at writes, it again ramps up a little behind the other drives in 4K, but then wipes everyone out from 64K on up. 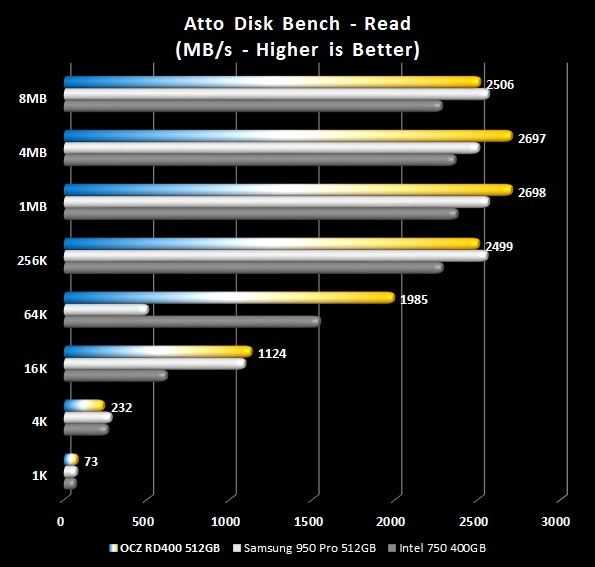 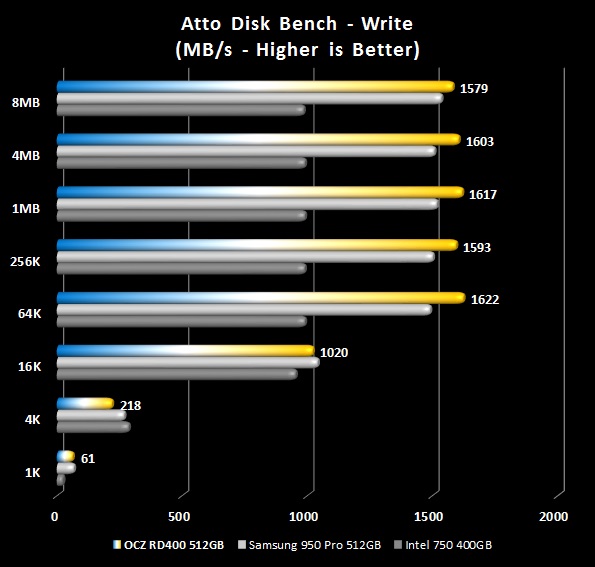 Below are the always comprehensive Anvil results. We keep these standalone simply because there is so much information contained in them. But if you want to compare scores, the Samsung managed 8,837 while the Intel we reviewed scored 9,727. I checked on another review and they managed to score over 11K in Anvil. Not sure why I am seeing these results which seem a bit slow, in writes more so than reads. With the spec’d performance of the Intel drive, I wouldn’t have expected the results to fall this way. Again, I have to look in the mirror here as other results on the web do show a much better performance coming from Anvil. 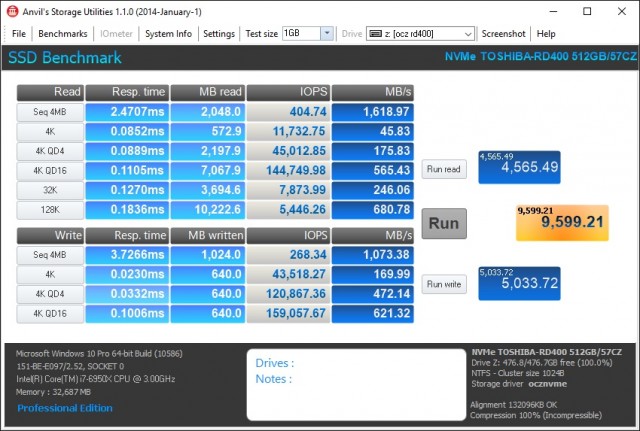 Overall, the latest from Toshiba and OCZ in the RD400 performs very well. On paper, it specs out to be faster than the Samsung 950 Pro and, in many cases throughout our testing, it is. We saw great performance in reads across many of the tests and writes were, in most cases, much faster than the Intel drive and trading blows with the Samsung. In the end, the drive landed just about where we expected, fast as heck and competes well with the 950 Pro. Where the OCZ drive sets itself apart from the rest is the Shield Advanced warranty. While other manufacturers offer the same length of warranty of five years, OCZ goes a step further offering advanced replacement with free shipping going above and beyond the rest.

OCZ gives you the option of using this drive in either its “native” M.2 form or with the included PCIe-based AIC if you do not have the M.2 slot or simply prefer to use it with the card. The AIC does have the added benefit of a thermal pad to help transfer some of the heat these things make which is helpful if you are really beating on the drive. Other manufacturers do not offer this in the box, so its a great value add at minimum or a necessity for others!

Pricing on the 512 GB OCZ RD400 with AIC comes in at $329.99 currently at newegg.com. This compares with the 512 GB 950 Pro at $320.99 and the Intel 750 Series (400 GB mind you at $329.99 as well). The latter offering slower performance and capacity than the prior two. If you are looking for top of the line consumer M.2 performance, you simply need to look no further. Between the OCZ RD400 and the Samsung drive, it’s a battle between two titans of which it is very difficult to discern between the two in a daily use scenario. We finally have some stiff competition for the long existing 950 Pro! 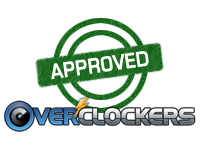