Someone sent me a picture of the 2000+ TBred he just got: 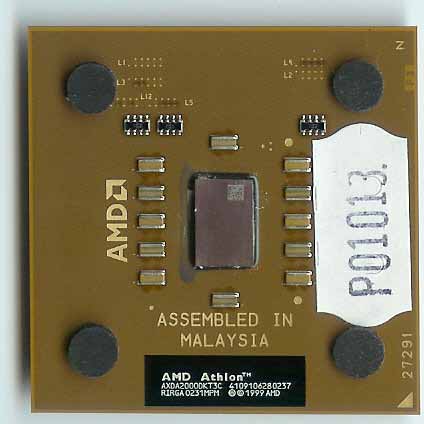 Let’s look more closely on the codes on that chip:

That’s a TBredA, and not a very good one at that.

Not surprisingly, the comments on the CPU began with, “This chip sucks.”

He didn’t get to 2GHz, and you could cook on his CPU.

So there are higher speed TBredAs out there. This particular one came from Belgium, but I really
doubt there’s some great conspiracy out there with evildoers saying, “Let’s send all the old, lousy chips
to Belgium.”

This is why looking at model numbers is important.

For at least a little while, it’s likely to be a crapshoot out there.

It’s your choice. You can make the effort necessary to ensure you get the CPU you want. Or you can end up writing me emails telling me how much your new CPU sucks, too.


SLI: Grand Enough For A Grand?

There some preliminary numbers for nVidia SLI figures in this article. There’s enough information there to tell us that putting two relatively cheap video cards isn’t going to leave you any better off (and usually a bit worse off) than

In a few months, I’ll have to get somebody a notebook for someone. Indeed, I feel a bit of desire to get one myself sooner than that. So I started looking, but before I did, I set some criteria for