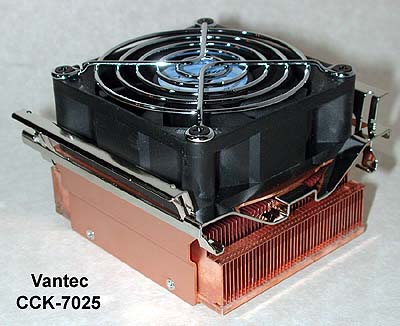 The kind folks at Vantec were nice enough to send a sample of their latest P4 copper heatsink, the Vantec CCK-7025, also called the “Copper X 478”. It features 53 thin fins (about as thick as an index card) soldered onto a 4 mm thick copper base, measuring 67 x 83mm – lots of cooling surface area. 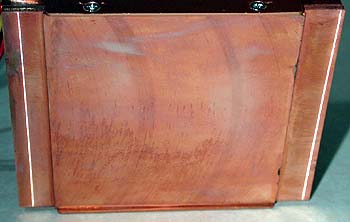 When I ran my nail over it, I could feel and hear ridges – lapping this base makes sense and you might gain a degree or two in performance.

The clip was a breeze to mount – push down on one side, engage the retention base, then push down on the other and it’s on – simple and secure.

In summary, an all-copper heatsink with a very secure, easy to use clip.

I tested the Vantec on an Acorp 4S845A motherboard with a modified P4 1500 to read CPU case temps.

Motherboard results place the CCK-7025 in the mid-low rank of heatsinks tested (Heatsink Ranking). With the YS Tech fan, it moves to the upper rank.

This is the kind of heatsink I would use when building a system for a friend – fairly quiet and good performance. With some lapping and a beefier fan, it could be a good performer for more aggressive applications, although at the expense of much higher noise.

Evolution of a Watercooling System