The good guys at Vantec were nice enough to send over a sample of their Nexus multi-function panel. The Nexus panel fits into a spare CD bay and features:

The Nexus ships with an abundance of parts: 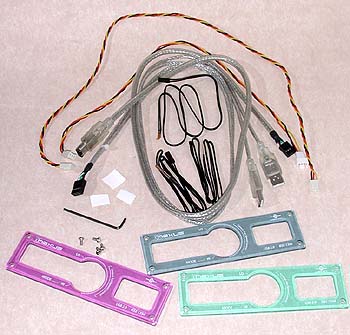 The audio alarm sounds if the fan stops or temps exceed 65 C. 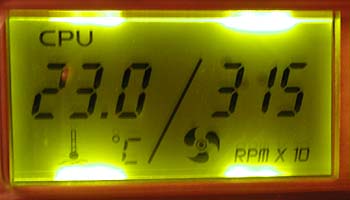 A look inside reveals the PCB and port connector blocks: 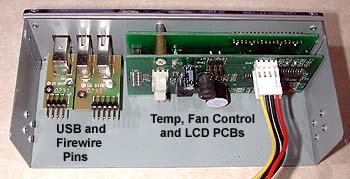 A closer view of the fan controller:

Setting up the Nexus panel is pretty simple – everything is well marked and self-explanatory. The temp probes are flat enough such that placing one next to the CPU’s core is not a problem.

The fan knob rotates about 270 degrees, so fine-tuning fan rpms is easily accomplished. With temps prominently displayed, manually adjusting fan speeds to balance noise and cooling is not difficult, as long as you can easily see the LCD display. I found that the fan did not respond immediately to a change – sometimes a lag of about one second or so.

When you first boot the PC, the CPU fan will spin up at full speed (this is done because some fans will not start at 50% power), then run at low speed for about ten seconds. After that, it settles into whatever setting is dialed in. I also found that the low setting was closer to 60% power.

Looks like an OK product for easier access to USB and Firewire ports, plus easy CPU fan control – a good-looking addition to any case, especially for the 24/7 user who can dial in low fan speeds when sleeping.

I think this is quite a nice picture to put on your webpage to show how you should not cool your CPU. The pump broke and that’s the result. My Athlon [email protected] crashed and the power supply still running when

SUMMARY: A high-performance waterblock for socketed CPUs. Cool-Computers was nice enough to send a bunch of waterblocks to test out – I am going to report first on the socket version pictured below: This block is of the “traditional” design