I have spent many hours and sent numerous e-mails to many people trying to unlock the mysteries of OEM and retail Radeons.

People have been trying to use a BIOS flash to get their OEM Radeons with a default clock of 250/250 up to the retail core and memory of 275/275, with varying results.

Let me say right away that the BIOS flashing of the OEM product is NOT the magic bullet for everyone nor perhaps the majority of OEM Radeons. The primary reason for this is that many OEM Radeons are hardwired to have a 3.15 volt Vmem while the Retail Radeon has a Vmem of 3.50 volts.

I became perplexed over this when I purchased an OEM Radeon White box from a popular vendor.

I took my OEM card and put it in the AGP slot and indeed it had a core and memory of 250/250. When I used Powerstrip, though, I was able to get this OEM up to 300/300 without having to use the BIOS flash or the voltage mod (more on which later). Trust me, I wasn’t complaining, but this puzzled me.

I asked around on several forums asking for people to help me compose a Radeon BIOS database which can be found in the Overclockers.com Forums, Video and Sound Card section.

What I found was very interesting. My OEM had this Bios information:

From the database information, it appears that the OEM versions have a BIOS part number of 103, while the retail version has a part number of 102. The people with OEM cards who flashed their BIOS were able to go from a -103 p/n to a -102 p/n, but this did not turn most of their cards into fully functioning retail cards.

My card happened to be a retail card with a Vmem of 3.50 volts with an OEM BIOS. That’s why I didn’t have any problems.

Naturally none of this applies if your OEM Radeon was shipped with 4ns ram. In that case, no BIOS flash is possible.

How To Find Out

Here is how you check your OEM card’s Vmem voltage with a Multimeter:

If you find out you have an OEM Radeon 8500 running 3.15 Vmem, then the BIOS flash will not do what you may have thought but there is a possible solution.

Disclaimer: I would like to add that neither I nor Overclockers.com are responsible if you decide to change these resistors. This information is just to clarify why the BIOS flash doesn’t work for all OEM cards.

There is a different resistor on the Retail Radeon 8500’s than on the OEM
versions. [email protected] came up with the following solution:

“This is the Vmem resistor to be replaced.” 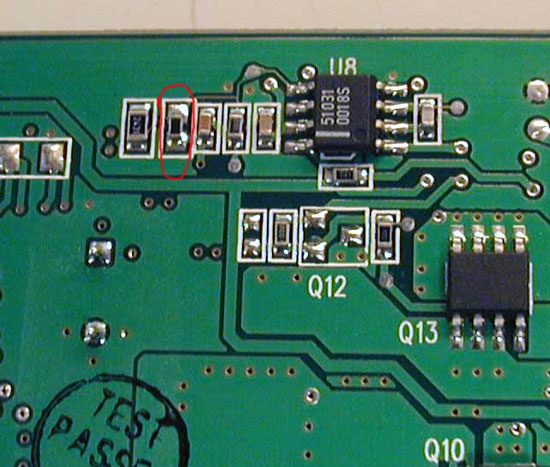 “I suggest you measure the original resistor value after you have soldered it off the card. So far, I’ve modded 4 of these OEM cards, and every one of them had an original Vmem resistor of 1.5k ohms. Vmem goes up to ~3.5-3.6V after this resistor is replaced with a 1.75K ohm resistor.”

The GPU mod resistor shown below . . . 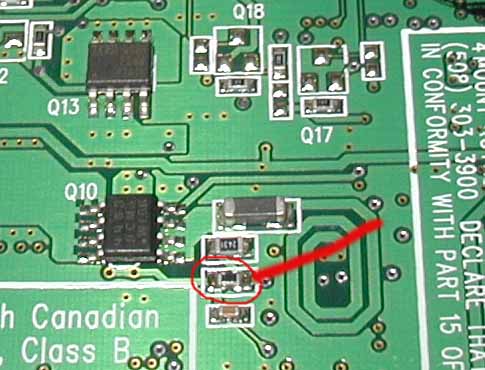 BEFORE YOU REPLACE ANY RESISTORS MEASURE THE ORIGINAL RESISTOR VALUE!”


I hope this article helps to clear up any confusion as to why the OEM to Retail BIOS flash doesn’t work all the time, and what you might do about it.

Ed. note: If you aren’t very comfortable doing this kind of soldering, or haven’t done it before, don’t do it. If it works, you’ve gotten a fairly small improvement. If you mess up, you’ve killed a $200 video card.

Even at 250/250, the OEM Radeon is still a nice video card. If ATI ever learns to develop drivers like nVidia, then they have truly will have learned that one must build a complete package and not just a great card.

Big thanks to Silversinksam and much credit to Macci, and all those that helped contribute data to my Radeon 8500 database

Tomorrow, how to get some better coolers onto the Radeon.

There’s a newsblurb over at c’t magazine I tried figuring out what they said after a Babelfish translation, but some of their apparent comments made no sense at all, and others contradicted the roadmap. Maybe it was convoluted German. The

As I mentioned on the front page yesterday, Intel already had an October 28th price cut scheduled. As expected, AMD will do the same around the same time. Now the Inquirer says it will present some more details on that