In January of this year, In Win announced its first generation of budget friendly mid-tower gaming cases – the GT1. With an eye on cooling performance, lots of features, and a unique look, In Win hopes to attract the gamer in all of us with an affordable chassis design. In Win has been around for many years and is well known in the OEM circles. In the past few years, In Win has become more involved in the enthusiast market and has made quite a push to provide products geared to that crowd. Being the first in a brand new range of affordable gaming/enthusiast chassis, let’s see how well In Win did with the GT1!

Below are some images depicting the features the GT1 has to offer. All images provided by In Win’s website.

The GT1 has a windowed side panel and comes in either black or white. Race car is optional! 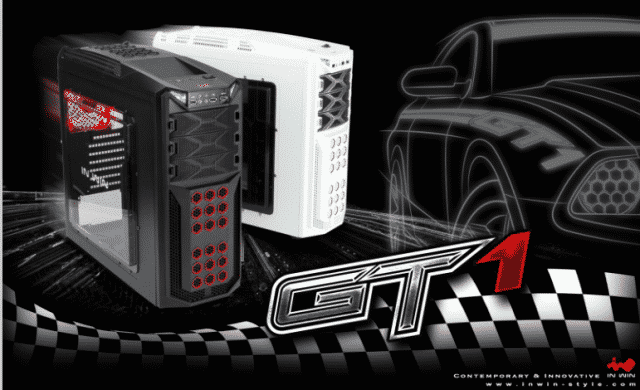 The front panel is customizable (more later), and we have a fully outfitted front panel I/O area. An EZ Swap Dock is also provided for easy data access. 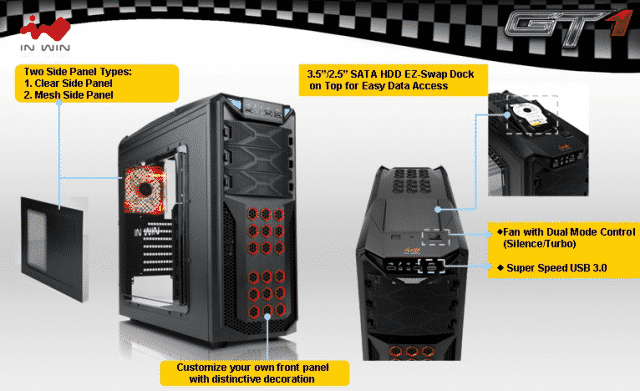 Tool free ODD installation, support for long video cards, and a large CPU access hole are a few of the internal features. 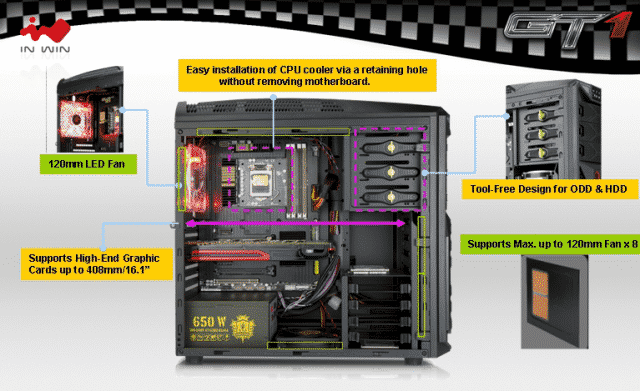 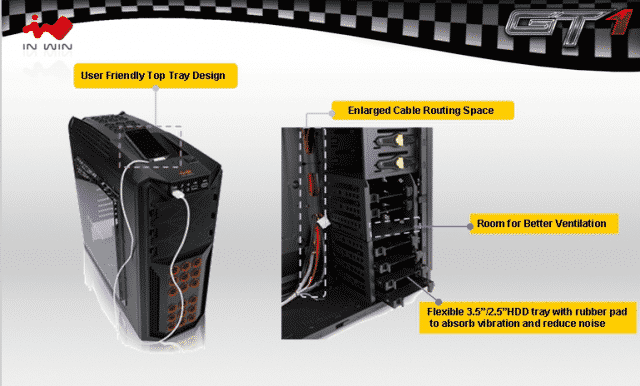 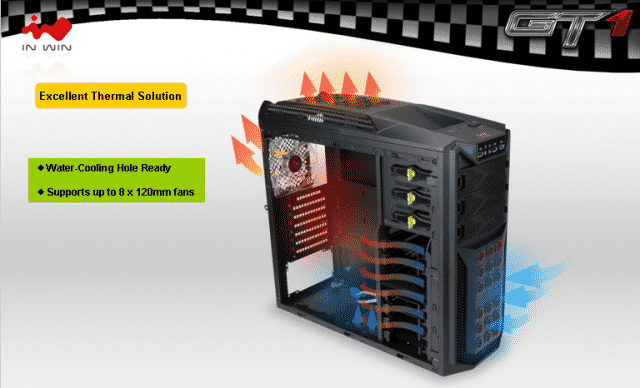 The specifications below are again provided by In Win:

For a box, we basically have cardboard with a few graphics. What more do you really need? The box front has a nice sketch of the GT1 and several icons listing some of the features. The back of the box has a sketch of the same race car we saw above in the list of features. The bad news is… the race car is still optional! The box sides are reserved for a list of specifications and features.

Usually, I find accessories packaged inside the case. However, this time around they were in a plastic bag sitting in the box. Speaking of the accessories, there are two bags containing miscellaneous screws and motherboard standoffs. There are plenty of screws provided to get a system installed. You also get a case speaker and a few ball and socket type cable management ties.

Starting with the front of the GT1, we see a honeycomb design incorporated into the lower section. The feature list mentions being able to customize the front panel. I’m assuming the red ring pieces can be swapped out for a different color because they can easily be removed. I’m not quite sure if In Win actually plans on offering different color rings, or if the ability to customize the front panel simply means using the rings or taking them out.

The three 5.25″ drive bays are more of a fine mesh design for providing dust filtration. There is no foam filter applied to the back of the bay covers, but I think it’s a fine enough mesh to do an adequate job of keeping dust out. To remove one of the bay covers, simply press the tabs on each end inward and pull it off.

At the very top, we have the front panel I/O ports. Included in this group are two USB2.0, one USB 3.0, and the headphone/mic jacks.

The power button, reset button, and two speed fan controller switch are all located along the front area of the top panel. Just behind that is the place a HDD will rest when attached to the EZ Swap Dock. Towards the rear of the top panel, we see additional ventilation provided by more honeycomb air passages. In case you’re wondering if those red rings on the front panel fit these honeycomb areas… the answer is no.

On the back of the GT1, we see that In Win has used a bottom mount PSU design. Above that are the seven ventilated expansion slot covers. The mounting screws for the PCI expansion slots are external of the case, which seems to be a popular trend as of late. To keep everything looking nice, there is a cover plate affixed over the PCI slot mounting area.

At the top, we see an included 120 mm exhaust fan, two holes for water cooling hoses, and the area a motherboard’s I/O shield gets installed.

There are two screen type filters located at the bottom of the GT1. One covers the PSU area, and the other covers the area where an optional 120 mm fan can be installed. The four feet are entirely plastic with no rubber cushions to provide surface protection or anti-vibration qualities.

The In Win GT1 is not the largest mid-tower case you’ll ever see. In fact, I think the word “cozy” would describe it well. This is definitely not a bad thing because many people prefer a smaller chassis over a larger one. As long as it holds everything you intend to use in your system, then I say the smaller the better!

The bottom area has a lot of ventilation, all of which is protected by the previously mentioned filters. Just forward of the PSU area is an option to install another 120 mm fan. Moving up the back side, we get another look at the bottom mount PSU feature, seven punch out style PCI slot covers, and an In Win branded 120 mm LED exhaust fan.

Under the top deck is where you can install two additional 120 mm fans, if desired. No screws are necessary to mount fans in this location because they are held in place with clips built into the top deck.

The three 5.25″ drive bays feature a tool-less design by using locking latches on the left side. From the factory, only the top most bay is ready for use. The other two bays will need to have the knock-out plates removed before using them. The locking latches have a dial in the middle that you simply rotate to unlock and remove.

The HDD cages have six trays that accept 3.5″ and 2.5″ drives. The HDD trays are made from very sturdy plastic and are not flimsy in the least. In order to accommodate longer video cards, you can remove the left side of the upper cage. Doing so will allow video cards up to 16″ to be installed.

The motherboard tray has a large hole for accessing a CPU cooler’s backplate. If an ATX form factor motherboard is being installed, you can utilize the motherboard tray’s built in mounting locations. For cable management, we have three vertical routing holes that incorporate into a channel running vertically the length of the tray. Running horizontally along the bottom of the motherboard tray is another large cutout. There is also a small hole for running smaller wires just above the large horizontal hole. Behind the motherboard tray, I measured just over 1/2″ of cable clearance. The actual amount available will be substantially more than this because of the bulge in the side panel.

To remove the front panel, three clips on the left side have to be released. After the clips are released, you can just swing the door to the right and remove the panel. Once the front panel is off, we can see the filter and 120 mm intake fan behind it. The fan is held in place by two clips, and there is another set of clips just above to add an optional 120 mm fan. The front panel I/O wiring is attached to the circuit board at the very top of the front panel. Everything here appears to be of quality workmanship.

The case wiring for the GT1 is standard fare, except for the additional wiring to accommodate the EZ Swap Dock. The two included fans are wired together in a rather messy affair, which leads to them being connected to the two speed fan controller switch.

Now that we’ve had an in depth look at the exterior and interior of the In Win GT1, let’s toss a system together and see what we can come up with!

Putting It All Together

Even with a full sized ATX motherboard, this “cozy” GT1 chassis went together rather smoothly. Something I overlooked while doing the interior tour was a nice spot provided for mounting an SSD at the bottom of the upper HDD cage. So, in reality you can install a total of seven HDDs, as long as one is a 2.5″ drive. A nice little bonus there! The cable management worked out well because of the space provided behind the motherboard tray and the right side panel. Below are the pictures of the final build.

Of course, I had the usual mess behind the motherboard tray. The side panel went on relatively easy after spreading the cables further apart than what is shown in the picture. The cutout for accessing the CPU backplate didn’t quite line up as well as I like, but it was manageable.

The last set of pictures show an overhead view and the lighting effects.

At the time of publishing, I was unable to find the In Win GT1 available for purchase. In Win tells us that is going to change very soon, and it should be available sometime during the next few weeks. According to In Win, the GT1 should hit e-Tailers with a MSRP of $69.00. When you look at cases in that price range, it all comes down to features and value. In Win packed a lot of features in the GT1, so I think the value aspect is certainly there. We’ve got a clear window, lots of storage capacity, good cable management, a two speed fan controller, and an EZ Swap Dock, which highlight the major features. Furthermore, the GT1 can house long video cards and allows you to add up to four additional 120 mm fans. Yeah, I’d call that a lot of features for $69.00!

If you’re looking to build a price conscious computer system without having to sacrifice a lot of features, I think the In Win GT1 deserves a serious look. Nice job on this affordable case, In Win!

NVIDIA partners are beginning to roll out their new GTX 750 graphics cards and the new Maxwell architecture they offer. As we discovered during our launch day article, Maxwell GPUs bring a lot of new technologies along with the new architecture. Most notable is the high power efficiency they bring to the table, which allows them to be used in lower end systems that might not have been able to handle the power demands before. Today, we’ll be looking at one of Galaxy’s new Maxwell GPU offerings in the form of their GTX 750 GC 1 GB Dual Fan model. Galaxy has added several of their own unique enhancements from the reference design cards, such as an expanded PCB, proprietary dual-fan cooler, and a factory overclock. It all sounds good on paper… Let’s go find out! Read More

We’re continuing on with our coverage of the GPU14 products released this week by AMD. Today, we have a budget minded offering coming in the form of the R7 260X. Just like the R9 280X and R9 270X we’ve already had a look at, this one is a re-badged GPU based off the already existing Bonaire GPU core. So far, AMD has done a nice job revamping existing GPUs for their GPU14 lineup; let’s find out if that trend continues as we explore the R7 260X. Read More

It’s another Kepler launch day for NVIDIA! The thrust behind this launch is to bridge the price/performance gap between the GTX 650 and GTX 660. This time around the GTX 650 Ti takes center stage. The MSI GTX 650 Ti Power edition will be our specimen as we dive in for a look at this new NVIDIA GPU architecture. Read More