NATA Computers was kind enough to send a LeadTek GeForce 2 GTS for our evaluation. I want to say from the outset, this is one helluva’ piece of work! One of the first things I did was to run some quick views through 3DMark 2000’s demo; I sat my wife in front of it to get her reaction. She, being sensitive to motion, lasted about five seconds before she had to stop looking at it – “Too real” she says.

And that about sums up the visual test – this card blows me away. I will do more benchmarking over the next few days, but visually it’s a stunner. Quick specs: 32 MB/DDR, AGP 2/4X, nVIDIA GeForce 2 GTS GPU.

Shown below is the card’s front – note a very large heatsink and four SGRAMs. 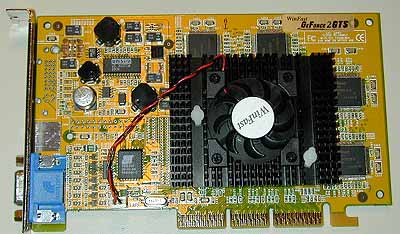 The back is uninteresting except for four more SGRAMs – a total of 32 MB. Used to be the entry-level W95 system was 32 MB. 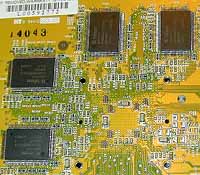 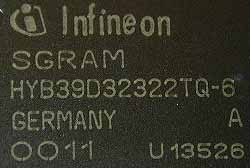 I did some quick temp measures of the SGRAM at default and the chips peak at about 35 C running the 3DMark 2000 demo. Any substantial overclocking will, I think, require some SGRAM cooling as well. RAM Heatsinks might be an interesting tweak. I considered a cooling solution covering the GPU and SGRAMs, but they are not the same height. A water cooled solution with shims could be interesting. 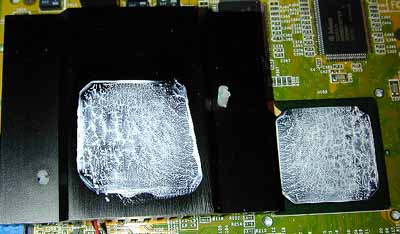 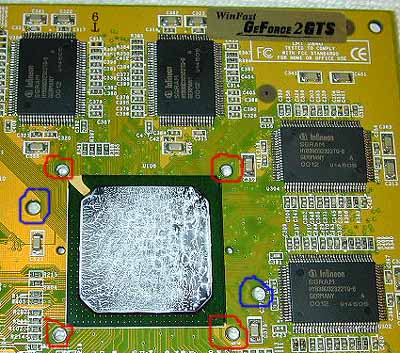 I made one mod already – rather than use the nylon heatsink push-pins, I am using small bolts using the same mounting holes. This gives more mounting pressure for better cooling.

I will continue testing and looking at some cooling options and update periodically. First Impressions: awesome performance, good customizing potential.

Dan Edgar pointed out that we did this about three months ago HERE. What a guy – deja vu all over again.

SUMMARY: Have an Intel heatsink lying around? Great cooler for the LeadTek GeForce.

Overclockers Australia had a great idea about using Intel’s retail CPU fan for video card cooling. The LeadTek Geforce 2 GTS is just crying out for a better heatsink. In Part I, I showed what lies underneath the stock heatsink – lots of nice holes to customize cooling options. Shown below is the Intel heatsink on the card. 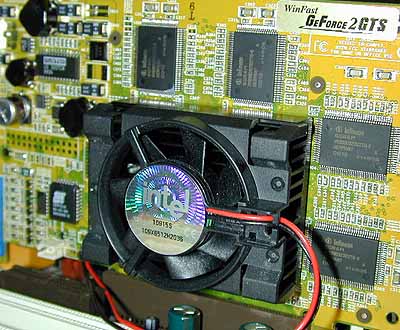 I mounted this with two one inch 6×32 bolts. I tapped the base of the Intel heatsink after lining it up with the hole pattern of the stock LeadTek heatsink. Drill two holes, tap for 6×32 threads, and bolt it on.

Shown below is how I isolated the bolt heads from the card’s circuitry. I used a small rubber grommet so that the no metal touches the back of the card. 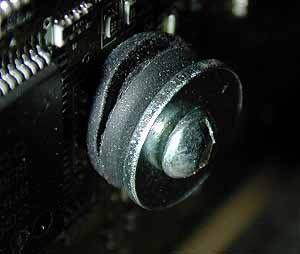 I have some other ideas on cooling, but the GPU does not get all that hot – runs very cool. I mounted my Radio Shack I/O on it and did not get more than 40 C. The 0.18 micron die makes a big difference in heat generation.