October 8th was the release date for some embargos for the new Z390 chipset. And with this date coming and going we saw the major board partners show off most/all of their new lineups. With this brings new naming conventions, new looks, and new features on the motherboards. We’ll list the boards from each partner along with any high-level features.

The Z390 chipset itself isn’t so much of a generational update, regardless if it was designed for 9th generation CPUs. The chipset, outside of supporting the 9th gen CPUs, has also brought with it a few features which are now integrated as opposed to being supported by 3rd party chips. Features just as the integrated 2T2R 802.11ac Wi-Fi (Wave 2 with up to 160 MHz wireless bands), native USB 3.1 Gen 2 (10 Gbps) ports, as well as other features including Modern Standby/Smart Connect, and ambient computing (wake-on-voice in low powered mode…think how a smartphone behaves or Cortana and Alexa with the screen off or Modern standby).

The takeaway here is the integration of existing features and functionality along with 9th gen CPU support. There is a possibility that this integration brings with it a slight amount of power savings due to not using 3rd party chips to drive the features, and perhaps the cost may be a bit lower. Unless these features are used, about the only real difference on the chipset will be additional CPU support. These additions allude to the fact that Z390 will be the real high-end chipset on Intel’s mainstream platform.

A Couple of Details

The chipset integrated Wi-Fi depends on its integrated connectivity feature, CNVi, which first made an appearance in Gemini Lake as well as the latest 8th generations CPUs. This integration replaces the 3rd party Wi-Fi module and integrates it into the PCH (items such as memory, MAC, and logic) leaving PHY and antenna on the companion RF module. These then connect through the CNVio interface through a specialized M.2. Intel’s website says there are three different companion modules possible. The AC-9560 (2T2R, vPro enabled), AC-9462 (1T1E with FIPS9 support), and AC-9461 (low-end 1T1R).

The other major feature is the native USB 3.1 Gen 2 (10 Gbps). The integration means motherboard partners will have to use the HSIO lanes to enable the ports. A total of four are supported on Z390, Q470, and H370/B360. It will be up to the motherboard partner to determine how many 10 Gbps ports are on each motherboard.

Audio selections will be the same ranging from Realtek ALC887 to ALC1220 codecs. Each manufacturer will put their own op-amp parts and capacitors to make their own twist, but the codecs do remain the same.

Below is a list for each motherboard manufacturer. We have also compiled a list of chipset features from Z390 and Z370 for a quick comparison before we dive into each board partner’s offerings.

Pictured below are the chipset diagrams for Z370 and Z390 to show the (two) differences.

ASRock has announced a total of 12 motherboards at this time. Boards will range from Mini-ITX to ATX with the Z390 Phantom Gaming 9 in the flagship position. ASRock’s naming convention is a bit different here compared to Z370 or previous generations with the use of the Phantom Gaming lineup of boards (six) which spreads across a wide variety of features, size, and pricing instead of the ‘Extreme’ lineup. What we do not see, yet, is an OC Formula which was absent on Z370 as well, perhaps to make an appearance here.

ASUS has brought the house with their Z390 motherboards giving users a total of 17 boards to choose from. Within the product stack is a workstation class board (WS Z390 Pro), The Prime series (three boards) aimed more at entry-level, the Strix and TUF Gaming series for gaming oriented boards as well as a refresh of the premium Maximus motherboards which include the full lineup from the Extreme to the Gene. Prices on the ASUS offerings will range from $150 to $500.

EVGA comes to the Z390 party with two motherboards around launch time with the Z390 Dark with its rotated CPU slot, two DRAM slots above the CPU (as opposed to sitting on the right) as well as a uniquely colored board with its black base color and gold highlights. The other board is the Z390 FTW which is more of a standard piece compared to the Dark. No mention of a small form factor option, such as the Stinger, so far.

GIGABYTE brings to the table 10 motherboards as well, with offerings from Mini-ITX to eATX with the yet to be announced Aorus Extreme. Pricing is said to range from $130 up to $290 with the Aorus Extreme likely to fetch more.

MSI brings 12 total motherboards to the party with eight listed on the website. Like the other major board partners, there is seemingly a board and a price point for everyone with features differing from board to board. 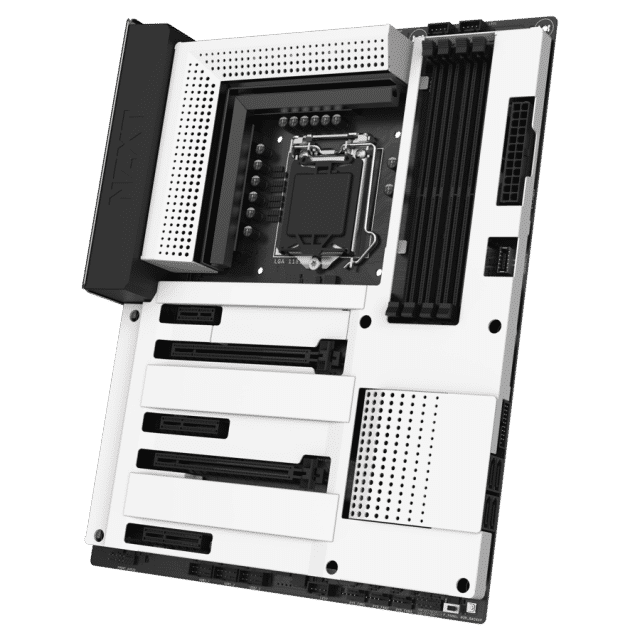 NZXT joins the fray with a single entry, just as they did with their first motherboard with the N7 Z370. The new board is the N7 Z390. It comes in black or white and has the same design aesthetic using the shrouding on the majority of the board giving it a really clean appearance.

Well, there we have it, a listing of over 50 motherboards that are out or will be released in the coming months. While we won’t get to review the majority of them, we are certain to see many of them which should give users an idea of their performance and look at their feature sets in a lot more detail. We will be updating this article with links to Newegg, Amazon, and our reviews for any of the boards to make it easier to get the board you are looking for. Keep an eye out on the front page for our i9 9900K review and new Z390 motherboard reviews in the coming weeks and months!

Who said all fan controllers are created equal? Certainly not Overclockers.com, in fact just in the past six months, we looked at several different fan controllers, analyzing performance and design. After investigating the offerings from several top manufacturers, including Lamptron (FC-2 and FC-3, FC-5), Scythe and even an older NZXT model, clearly the new NZXT Sentry LXE is by far the best-looking fan controller out there. Read More

It’s that time again! On August 7, I, along with several other members of the overclockers.com community, will be returning to Los Angeles to compete in the North American finals of Gigabyte’s annual overclocking competition, GO OC 2010. MIAHALLEN came in first place last year, and I took the second place position. We both went on to compete at the finals in Taipei, Taiwan. This year we’ll be seeing some familiar faces, as well as some new ones. See the official press release below for event details including prizes, hardware info, and a chance to win some nice prizes! Stay tuned for a complete list of overclockers who will be competing this year. Read More

Today we are reviewing a newly launched RGB solid state drive from Team Group. Announced in September, the newly redesigned T-Force Delta MAX is one of the most original creations we’ve ever seen in the hard drive market. It has addressable RGB LED’s and implements a mirror-type light diffuser. Team Group delivers a piece of RGB artwork that’s sure to an eye-catching element of any high-end computer build. Read More