Hello, Overclockers! Today’s catch for the chopping block is a new set of DDR4 from ADATA. Coming in at 16GB (2x8GB) and DDR4-2800 this kit should be no slouch. Icing on the cake, these RAM modules have bling in the form of red LEDs across the top to light up your rig. Continue on with me as we delve in to the ADATA XPG Dazzle DDR4 memory kit.

The ADATA XPG Dazzle DDR4 series is manufactured in Taiwan. The memory carries a lifetime warranty. Looking at the speed and timings of this set of RAM it is very possible the IC’s are different from what I’ve seen in past reviews. It’ll be interesting to see what it does later in the benchmark results.

The specifications and features below come directly from the ADATA website.

Below you can read more detailed specifications of the ADATA XPG Dazzle memory kit. These specifications are shown by the Thaiphoon Burner software, which is great for analyzing details about RAM. Additionally, memory profiles can be created or edited in this software. We can see this kit is built with Hynix IC’s, which is indeed a change from the Samsung IC’s I’ve had in hand before. 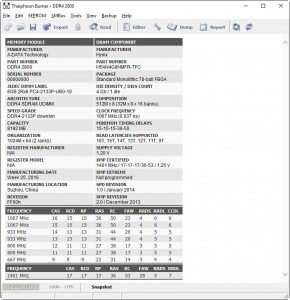 The packaging of the XPG Dazzle is simple and effective. It is a cardboard shell with a blister pack inside. There is no hole to hang the memory on a rack in a brick and mortar store, though. The front has a few high-level specifications about the kit along with a window to see the RAM. On the back is a statement from about the RAM, their warranty, a few social media links, and contact information of their offices.

As seen below, the modules are sporting red and black heat spreaders with a clear plastic upper section. This clear area allows the red LEDs to shine bright without being an overly bright point source of light. A black PCB rounds out the razzle of the XPG Dazzle sticks.

Below is a picture showing the label on the RAM. It shows the part number, speed, voltage, and the three primary timings.

Now… for the dazzle! (See what I did there?) The red LEDs here breathe on/off in a smooth pattern, this would be a great finishing touch on any black/red build! Sorry about the cables in the middle, there isn’t anywhere else for those to go with how the test bench is set up. 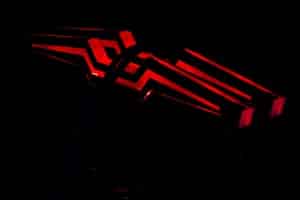 Stability at XMP settings was tested using AIDA64 diagnostic software and also later during the benchmarks. The ADATA XPG Dazzle kit is stable at XMP settings.

Below is a screenshot from AIDA64 stability test after six hours of full load:

Since the memory is now proven stable let’s look at the performance testing and comparisons.

The first synthetic benchmark is AIDA64, specifically the Memory Benchmark. Here we see the two higher frequency kits pull around a 5-7% gap over the lower frequency kits. Lower timings also help with copy speeds, hence the up to 2% deficit there. 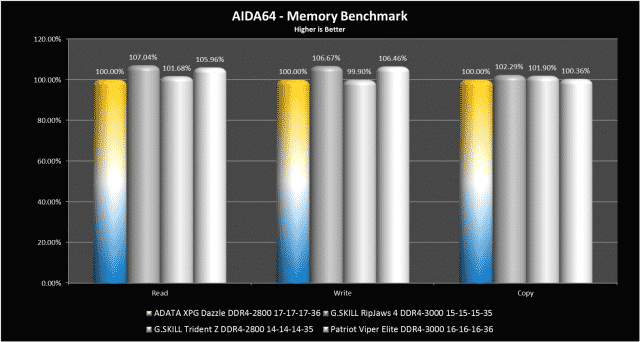 Up next in the synthetic benchmark suite is MaxxMem2. With the exception of the Read results the numbers from MaxxMEM were curious, the ADATA kit didn’t follow any trend I can pick up on. That said, the result was consistent over multiple runs, but these Hynix IC’s run tighter secondary timings than Samsung IC’s. It is known that MaxxMEM is more sensitive to tightening timings than AIDA64. 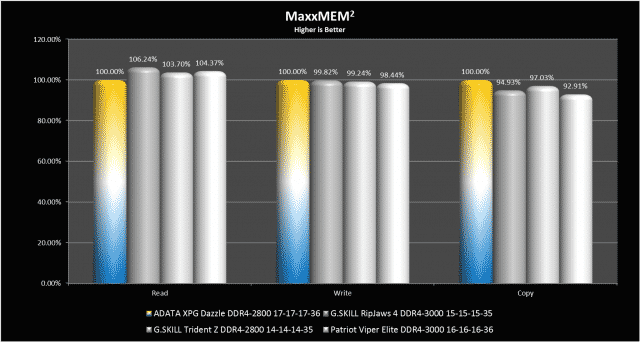 For the final synthetic benchmark we’ll look at HyperPi 32M. Again, a curious result, but the tightest set of timings did win out here. HyperPi is very sensitive to timings, confirming what we saw happening above in MaxxMEM. 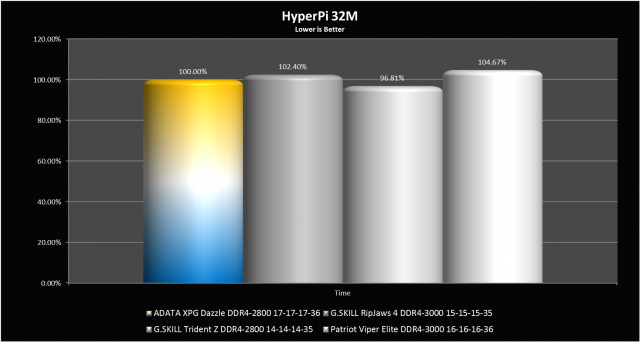 First up in our testing of rendering-based benchmarks is Cinebench R15. In this test the XPG Dazzle was almost a range topper! 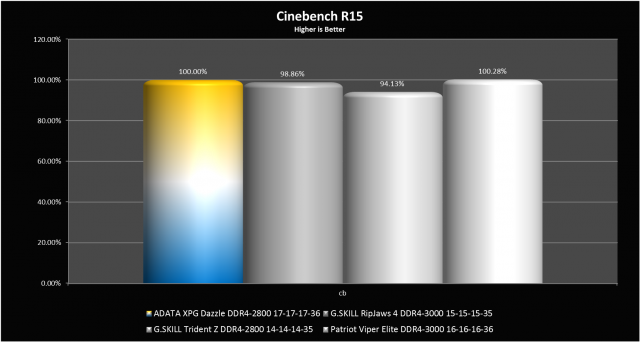 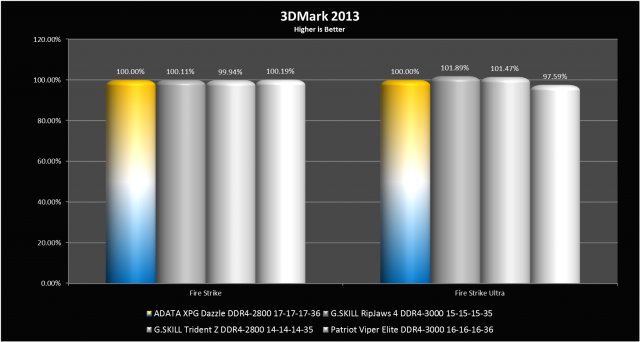 Our last rendering based-benchmark, PCMark 8, resulted in similar performance as 3DMark. We see a little variance in the results, but nothing that will be noticeable in daily work. A maximum differential here of 3.88% occurred in the Work test, but most results were within 1-2% of each other. 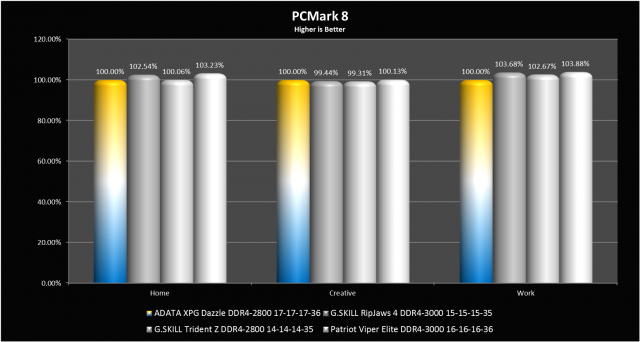 Being based on Hynix IC’s I don’t have as much prior experience in overclocking as if it was based on Samsung. Overclocking is tested with the AIDA64 Cache & Memory Benchmark. If the system boots and passes the benchmark, the result is listed below. I was unable to raise speed at 15-15-15-35, even with 1.45V on the DIMMs. I also couldn’t tighten into the 13 CL range.

Below is a graph of comparing the results from our earlier XMP tests of the AIDA64 Cache and Memory Benchmark to some selected overclocked results. As always the Read, Write, and Copy results are “highest is best” and the Latency portion is “lowest is best”. There were the expected gains from overclocking this memory kit, to a max percent of 7.12% while staying safe for 24/7 usage.

Looking back at the specs, they don’t look overly impressive on paper. In actual testing though, the ADATA XPG Dazzle held up well. As for the design, if you are looking for black and red with a red LED for your build these sticks look fantastic. Otherwise, you’ll need to find another series of RAM to purchase. The XPG Dazzle lineup only comes in black/red with a red LED. It would be nice to see at least black/blue with a blue LED for a secondary option.

As mentioned, the XPG Dazzle held up well even coming in at 2800MHz 17-17-17-36. The sub timings definitely played a role here, for the better. Overclocking showed gains, but I wasn’t able to push particularly far.

Pricing, this one gets tricky. I cannot find this exact kit on Newegg, Amazon, or any of my other normal retailers. What I can say though is this pair of sticks comes in at an MSRP of $109.99 and if you want them in quadruple the MSRP is $199.99. This is notably higher than other, similarly spec’d RAM kits on the market, but those also don’t sport the bling. I’d say the price is justified if you’re looking for a well built set of RAM with some serious flashiness to it. Overclockers Approved.

Today, ADATA’s XPG division announced the new XPG ALPHA wired and wireless gaming mice. XPG went as far as to survey users’ fingers and hands to develop this simple yet ergonomic design. At the core of the XPG ALPHA are OMRON switches and a Pixart PAW-3335 sensor. Subtle RGB lighting is included and fully customizable via XPG’s PRIME software. The wireless model utilizes 2.4G wireless and Bluetooth technologies for connectivity, features a battery life of up to 60 hours, and is priced at $69.99. The wired version is slightly cheaper at $43.99. XPG claims both models will be available soon, but does not list a timeline. For additional details, see XPG’s press release below.

I was pretty surprised when I received the info that EVGA is offering a DDR4 memory kit for review. Somehow I missed the fact that EVGA had entered the DRAM market some time ago and has already presented DDR3 and

Thanks to XFX, we have the MERC308 BLACK RX 6600 XT on the test bench today. This is the third iteration of AMD’s RDNA2which is a pared-down die to give us NAVI 23. And according to AMD, it sits in the product stack right behind the RX 6700, is ideal for 1080p gaming, and is a bit more budget-friendly. If you can find one that is.

1) ADATA used its own PCB design which is based on JEDEC Raw Card B. To be more precise, it is Raw Card B0 (dual-rank PCB for x4 and x8 single-die DRAMs with DDR4-2133 speed rate). The visual difference between ADATA’s PCB and standard JEDEC Raw Car B is SPD location (to the left) and availability of additional passive components (to the right);

2)The PCB of the modules was probably manufactured by HSIEN JINN INDUSTRY CORP or Dalian Mingjia Electronics Co., Ltd. If the heat spreader was removed, I could recognize the manufacturer. Booth the companies are not good at quality. Besides, SPD EEPROM package is probably MSOP8 which is not specific for DDR4 modules. All DDR4 modules should carry UDFN8 or TDFN8-package SPD EEPROM.

Thanks for the feedback! Your notes about the PCB manufacturers could explain why I wasn't able to overclock these sticks very far.