SUMMARY: First look at AMD’s Palomino indicates marginal performance improvements over the T-Bird, but will the extra cost justify a switch? 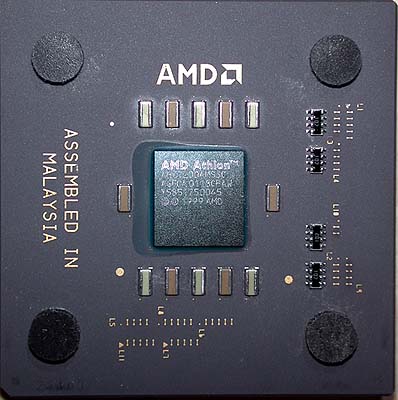 I am very interested in the Palomino, mainly due to the inclusion of an on-die thermal diode in its core, similar to Intel’s diode. I think this will help users more accurately monitor CPU temps compared to using in-socket thermistors. Curiosity being what it is, I decided to buy one (1200 MHz) so we could begin to explore its possibilities. I searched Pricewatch and found only a handful of vendors who have Palominos, and only one who had it in stock to ship – Monarch Computers.

Right now the Palomino is going for premium pricing, so if you are interested, I would definitely wait a while.

The first thing of interest was the diode, and I went to AMD’s spec sheets to figure out where it was. It’s located on pins S7/U7; these pins are not connected to anything on the T-Bird. This means that unless your motherboard manufacturer decided to implement the Palomino’s diode (highly unlikely), the current crop of Socket A motherboards DO NOT support on-die temp monitoring. If anyone knows of one that does, drop me a line.

Now I have a challenge for an EE out there:

I know that an external circuit which can attach to these pins is possible – go HERE for one that works on Intel’s CPUs. So, if some kind, knowledgeable soul is up to designing one to retrofit a current motherboard, I think we would all be indebted to him. I’ll be out of town for a couple of weeks, so please
Email Ed on this one. Also, this has to be made of readily available parts.

Palomino codes start with “AHX”, as shown here. The “HX” is the key identifier. 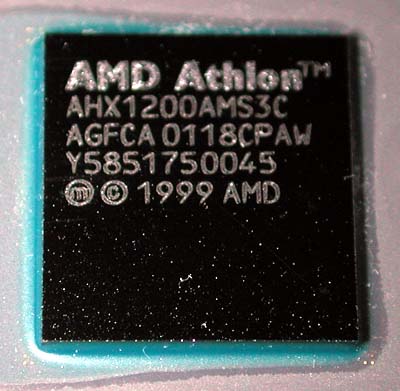 This particular Palomino is unlocked:

In addition, there are more bridges on the Palomino than on T-Birds and Durons here: 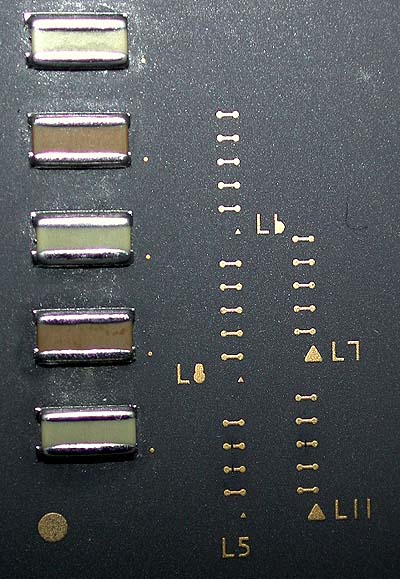 We don’t know yet what all these do, but I’m sure the curious ones (Like John Carcich) will start to open and close these to find out what they do – going to be fun!

For a first look, I concentrated on temperature and performance differences. We will be thrashing out more tests on this, so regard these right now as a peek at how they compare.

First thing I looked at were the power requirements between them:

This is clearly a more efficient chip for AMD, with power reductions of about 15-17%.

To determine how well this translates to a cooler CPU, I ran the Palomino against my T-Bird 1133 running at 1200 MHz and 1.8 volts on an ABIT KT7 (my KK266 bit the dust). I used a watercooling setup for this test:

You have to expect some difference in heat radiated based on CPU watts, and the reduction does pay off in reduced temps to some degree, but don’t expect to see a major difference. Let’s say that you might see something like a 5-10% temp reduction, but with efficient cooling, this translates to maybe a 2-5C difference; Intel still leads on this one Big Time.

The Memory Bandwidth scores are interesting – one up, one down. The performance results, as usual, will vary by application. Overall, the Palomino does show some improvements, but I seriously doubt users will see it on screen; certainly not enough to justify the upgrade expense at similar speeds.

At first blush, the Palomino does have marginal advantages over a T-Bird at the same speed and voltage, but not enough to justify a swap. However, for those considering a major upgrade (for example, from a Duron), the Palomino is worth a look BUT, whether pricing differentials justify the Palomino over the T-Bird is up to each user. How the Palomino stacks up in overclocking potential will be explored in another article.

This covers some of the most asked questions about AMD products. — Asmodean, n2 and SickBoy


AM2+ Denebs: Doomed To Die