SUMMARY: If not for its massive size, the AMK-SECC80+ (hereinafter “AMK”) would take the title of best Intel Approved PIII Heatsink. The AMK ranks between the Alpha and the Card Cooler Thin Fin in terms of performance. Also it can be easily “souped up” by changing the 80 mm fan to a higher performing one – there are many to choose from. Overall, a solid buy. 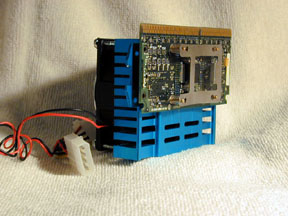 As you can see from the picture, my naked PII is dwarfed by the AMK – it measures 3 1/8″ by 4 ¼” x 2″ high, weighing in at about 11 ounces. The finish at the contact point with the CPU is not as polished as I would like and performance can probably be improved with some lapping. It comes with a graphite pad which I summarily scraped off. What is also a nice feature are the cooling vents above the cache chips – with cache heat a potential limiting factor at overclocked speeds, this is a desirable feature.

I mounted the AMK on my SOYO 6BA+IV using my naked PII 300, running at 450 MHz, as the test bed. As the picture shows, the AMK is substantial but not a tight fit – it clears the first DIMM slot by a nice margin (the SOYO is not that big). The only problem some may have is with some mini-ATX cases – the power supply can crowd the CPU slot and the AMK will not fit on these cases. 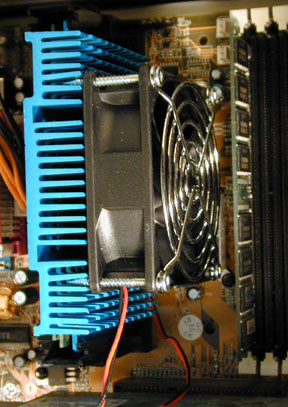 At 450 MHz, the PII throws off 33 watts, close to the PIII 600’s 34.5 watts. Interestingly the AMK came with the fan blowing air away from the heatsink (Update: AMK informed me that the fan was installed incorrectly – it normally blows in); I ran the test both ways – one series blowing into the heatsink, one blowing out. Each test was with Prime 95 running, using the PII’s thermal diode temp as CPU temp and measuring the intake fan temp with a digital thermometer. Results as follows:

This compares to 0.52 for the Card Cooler Thin Fin, currently the best Intel Approved PIII Heatsink – the AMK beats it by about 3-4 C. Impressive performance, achieved more by brute force than elegance of design – but I’ll take it. I’ll call the AMK the second best air cooled PIII cooler tested to date and leave it at that.

The AMK has a lot of potential – with some lapping and a high-performance 80 mm fan, achieving better results might be possible and potentially could get closer to Alpha level performance. Noise is very tolerable but depends on fan speed – more cfms, more noise. I would rate this as a solid buy.

AMK suggested I give this unit away in a contest. OK, I will give this unit away to the person who emails me a better name than the “AMK-SECC80+” – give me a break; it’s like calling a Mustang “The Small Coupe Car.” Judging is totally arbitrary by me.


The Big Blocks on the Block