In this review, I’ll be trying to bring together two of the heavyweights of super-cooling. I’ll try to show what I feel to be the strengths and weakness of each system.

Oddly enough, performance will NOT be a major issue! Either system has the ability to bring a CPU to zero Centigrade under 100% load and create a highly overclockable environment.

Swiftech’s WMC 2000 accomplishes this by way of dual water-cooled 78 watt peltiers. These are contained within an aluminum waterblock which houses a copper cold plate. It utilizes an in-line pump and water reservoir cooled by way of a 120mm fan blowing through a radiator and exhausting waste heat out the back of the box.

Swiftech relies upon dielectric grease and foam insulation within a well-machined aluminum CPU envelope to protect against condensation. All this is beautifully arranged and efficiently set up within a (Swiftech) modified LiteOn FS20 server case.

I’ve come to appreciate the fact that Swiftech takes up none of the space normally used by hardware components. (See my Swiftech review for further details.)

The rather elegant solution adapted by VapoChill starts in a totally different place to arrive at the same end. VapoChill super-cools thru a mini air conditioning system. In place of water: Freon. In place of peltiers: A two phase compression/evaporation system which cycles freon from liquid to gas and back again within a completely sealed system.

VapoChill relies upon a small heating device placed along the copper “tines” of the chip and foam to guard against unwanted moisture.

Once heated by contact with the CPU, the freon boils, evaporating into its gaseous state. That carries with it the entire heat output of the CPU, cooling it far below room temperatures. From there, it’s piped into a radiator and cooled with the assist of a 120mm fan that sucks air through the radiator, expelling it back over the compressor.

This is indeed unfortunate as it means that the VapoChill has NO active means of dumping waste heat from the computer case. The result is a system temperature of +36C at a room temp of 70 F!!

The VapoChill Cooling System itself takes up all but two 5 1/4″ and three 3 1/2″ drive bays at the top of the case. It displaces the power supply unit to a very awkward location above the CPU. (See my VapoChill Review for further details.)

I’m not the sort of reviewer who tries to quantify his opinions by assigning ratings by numbers or stars. I’ll just say that the LiteOn is by far the finest case I’ve ever owned. The VapoChill’s Schaefer case is by far the worst!

The Swiftech bare bones comes with a complete cooling system installed in the case – there is nothing extra to buy. A 400 Watt power supply comes with it and is pretty much required to power the dual peltier system. Swiftech offers FREE installation (when you mention Overclockers.com.) of your chip into the water-cooled, peltier-enhanced envelope. You supply, or purchase, a new one from Swiftech. Cost: $656.00 + shipping.

Minotaur is the only US distributor of the VapoChill. The VapoChill “Case Only” system goes for $709. With a Chill Control PCB and CPU kit: $788.00. Minotaur will assemble your VapoChill, including installation of the chip of your choice (your own or purchased from Minotaur) into it’s “Clamshell”, for an additional $125.00. ($90.00 if you mention Overclockers.com) Shipping not included.

Note: Minotaur has just informed me that from now until end of Oct. they’ll take $75.00 off the price of assembling the VapoChill. That reduces the set-up cost to $50.00! Given what’s involved in setting one of these babies up, a very nice deal indeed!

For a limited time Minotaur will give their customers a 300 Watt power supply; it proved to be quite adequate to power my VapoChill System.

So Which system cools better? 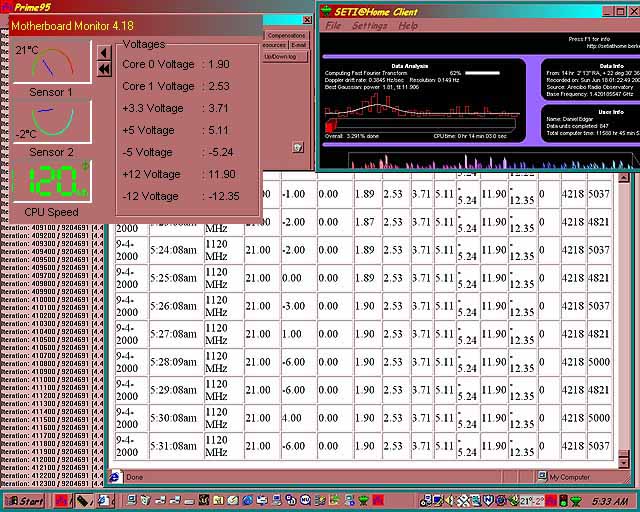 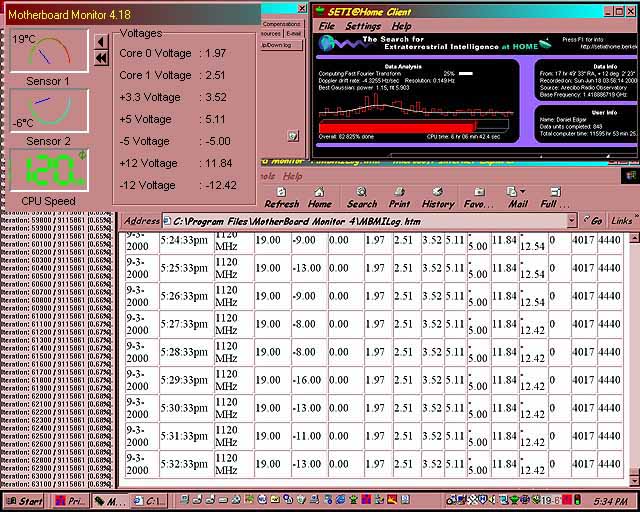 But ‘better’ becomes a thorny issue at this point. I’ll try to explain:

While the VapoChill averaged -3C degrees colder temps, it was and is not as stable as the Swiftech system. Is this VapoChill’s failing? Decidedly NOT! Swiftech simply lucked into the better chip!

What does this tell us? Simply that super-cooling well NEVER be any better than the CHIP it cools. That once a chip’s operating temps reach around zero centigrade, it performs at its optimum – and colder doesn’t get you much.

Not unless your prepared and ABLE to go a lot, lot colder.

No practical means of doing so exists at this time for the PC user.

“So isn’t there some advantage to being the colder system?”

Not as such. But Swiftech’s temp starts to climb when room temps reach around 73C. On hotter days we begin to see the limits of the cooling system – never alarming enough to to force one to unclock or create instabilities, but once you become attached to -C temps you hate to see your system at, say, +6 or +7 C.

On the other hand, the VapoChill seems totally immune to the outer environment’s temps. I’ve yet to see her go over to the dark ….err ….’plus’ side.

“So which is the better system, overall?”

I truly hate making this choice, but I owe the reader an answer.

Swiftech….if I could only keep one of my systems, I’d PAY to keep the Swiftech. Fortunately the reader can save quite a bit by choosing the Swiftech.

Swiftech represents a older and more refined technology. The VapoChill has just begun it’s journey. While I have no doubt that both products will continue to evolve, The Swiftech has reached a very satisfying plateau. VapoChill stands at the foot of the mountain.

Reader response has indicated that people who have bought VapoChill are on the whole happy they did. But EVERYONE who was kind enough to respond to my review deeply regretted, as do I, the choice of case for this cooler.

And finally, A NEED to complete the final assembly of the clamshell inside the case.

It is my view that both of these products are for the dedicated hobbyist. For those who love hardware in and of itself. No video card or game has need of nor benefits from a one gig system or beyond.

But that day IS coming! With little or nothing expected from Intel for MONTHS to come and AMD doing its level best to rid itself of its overclocking customers, these Super-Coolers will only look better and better as time goes by.

Recent discovery: I’ve been having serious condensation problems with the VapoChill. Minotaur is sending replacement foam pads and Slotket to me. (Chip’s fine”:O} When I receive them, I think there’s a good chance the VapoChill will show lower temps under load than reported here. If this is the case I’ll update with corrected temps.

I’ll be “rebuilding” the Clamshell myself this time, so look for a third mini-review once I’ve completed the rites of passage”:O}

The Next Six Months: The Empire Strikes Back

SUMMARY: Complete entry level watercooling kit. The good guys at XSPC were nice enough to send a sample of their XSPC X2O Watercooling Kit to try out. This looks like an entry level kit with three separate components – Waterblock,

It Is A Good Day To Die

Finally got the email from somebody “defending” the free market system I’ve been looking for. The consumer *MARKET*, not Nividia, killed the S3, 3dfx, etc. competition by buying the hell out of TNT and GeForce cards. And now the market