Firing Squad wrote an article stating that you can identify locked from unlocked processors by the code on the chip.

Fortunately, a few days ago, I asked those who owned one to please provide the codes on the chip. At least two of you have Durons that you reported as unlocked that Firing Squad said would be locked.

So much for that idea.

What’s worse, though, is that the 100% fool-proof way to determine whether a chip is locked or not is SIMPLER than what was suggested.

Look at the L1 bridges at the upper left-hand corner of the chip, as shown below: 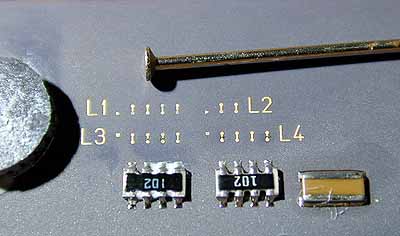 An unlocked Duron – the “nail” is a pin.

If all the dots are connected, it’s unlocked. If they aren’t, it’s locked, and you need a conductive pen to fix that.

Will A Recession Cut Bloomfield Prices?

I was amazed by my PIII 550E’s and my PIII 500E’s overclocking abilities in the past. I’ve managed to overclock the first at 825MHz and the second at 740 MHz, but I was surprised by the abilities of a PIII

It can be done, but not easy. — John Cinnamon.