When it concerns the health of my PC, I always attempt to view other people’s information objectively whilst showing respect towards the other people who use the forums at Overclockers.com. Recently, there have been a few claims of large overclocks in the forum, which has prompted disputes as to if these claims were at all possible or faked.

While I was under no dissolution that anyone with reasonable PhotoShop skills could fake a benchmark, I had heard whispers of a program that would allow you to effectively select any benchmark you wanted. The program in question was designed for a game called “Half Life”; however, it greatly effects overall Windows performance. Now the question is “Does this program exist and does it work?”.

Well, I’m sorry to say YES to both.

Below is a pic of the tool used to fake these benchmarks; it has been slightly edited to remove the programs name and the URL where it can be obtained from the titlebar. However, it can be clearly seen that to obtain outrageous benchmarks, all you need to do is move the slider. The configure tab just brings up a screen where the user can select ‘hot keys’ to change the speed on the fly. 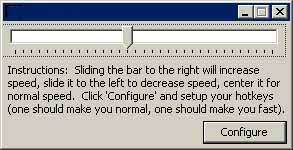 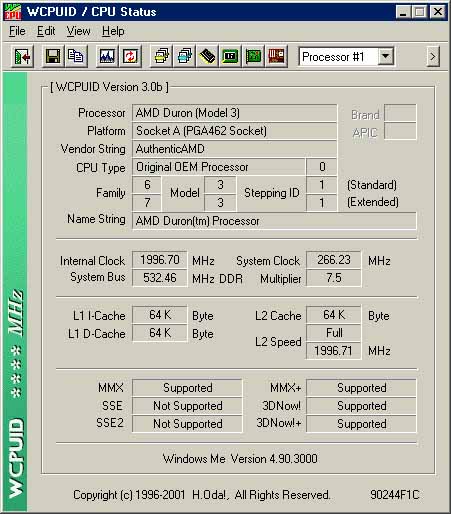 The Mad Onion 3D Mark 2001 is a strange beast and would not fake using the cheat. It continued to state that not enough benchmarks had been completed to produce results, even though all the benchmarks ran correctly. It is commonly known that 3D Mark 2001 has anti-cheat code.

However, this is thought to continue over to the system information feature, which is not the case, as shown below with the Duron clearly displaying 88.25 Ghz. The Duron is identified as a Slot type processor as standard on this information which is obviously a flaw of the software rather than that of the cheat. 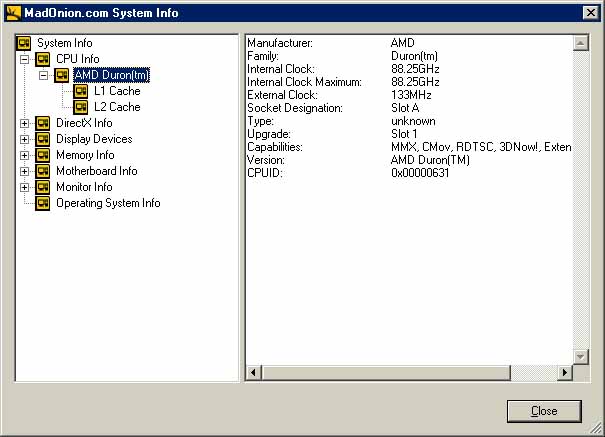 The SI Sandra Benchmarks were faked with absolutely no trouble at all. This is the Duron set up to display 2 GHz. The results took a little longer to display and the PC at first appeared to have crashed, but this was not the case. 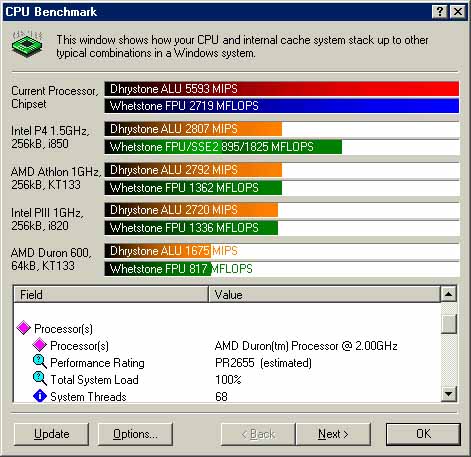 The memory benchmarks from SI Sandra appear to produce some rather different results when the benchmark is completed using the cheat. While the benchmark includes the CPU, it does not make a large amount of difference.

For example, when I run the test at my standard CPU speed or its over clocked speed, the memory scores only display a minor difference.
The reason for this high PC133 SDRAM memory benchmark score with the cheat program is that it slows down the ref. Clock.

When the ref. Clock is lowered, all benchmark programs think you are running at higher MHz and that you are crunching numbers faster, and you get higher scores. This is because it looks like your system is doing more calculations/operations per second, but that’s just because the “second” is a greater period of time than a second when using the cheat.

The results look about right in most of the synthetic benchmarks (like SI Sandra CPU & Media) because the increase is linear. However, this is not the case in the Memory Benchmark, because it’s limited by memory speed. If you don’t increase the FSB but only increase the CPU, you don’t obtain anything close to a linear increase. 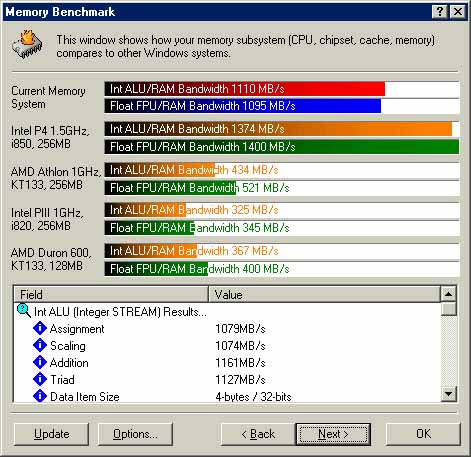 Obviously, at different times we seek advice from other overclockers and the information and advice they provide must be taken with a little bit of good faith; benchmarks must be viewed the same way. Benchmarks were faked long before this type of software became available and will continue to be faked by some people; however this just makes life a great deal easier.

So can we trust benchmarks?

I believe that the situation has not changed. However, some benchmarks are better than others – 3D Mark 2001 would not work with this program correctly and as such, make finding the fakes easier.

The memory benchmarks are good indications as to a fake if the results appear linear. Keep an open mind and ask questions, but if you come to the conclusion that you do not believe these people, then that is your right. However, do not insult them, as this achieves nothing.

I’ve just been made aware the the benchmark faking software does not work on Win2000, which I never knew having only Win9x on my system (however, a WinNT version is available).

However, more disturbing is that I have now tested this information on both [email protected] and [email protected] clients, and both clearly display a performance increase. This means teams could be using cheats to obtain an advantage – quite how this effects the data I do not know.

Is it possible to develop a cheat-proof benchmark?

If there is sufficient interest, Overclockers.com will sponsor a competition to create benchmarks that could not be cheated in any way. The winner will receive a $100 prize.

NOTE: DO NOT ask me for this software!

Paul Dolbear aka The UnseenMenace

¹OOPS! One person suggested that my Duron 800 @ 1050 was indeed a fake, which I hate to admit is correct. I do usually run my PC at this speed, but due to the unnaturally high temperatures in the UK at the moment, I reduced the speed as my PC was unstable. This was something that I forgot at the time of the report. The Duron was actually running at 1000 MHz. Obviously this is my error and I clearly admit it.

NOTE: The views expressed herein are those of the author, an independent contributor, and not those of Overclockers.com or its staff.

Routers Several companies are now producing hardware specifically meant for connecting a LAN to a WAN – a home network to the Internet. Such a device usually looks like a hub and can be had for $140-$200 US (mailorder) from