There are a vast number of articles on CPU watercooling on Overclockers.com, as well as on a lot of other hardware-related sites. This is normal, considering the fact that the CPU is the greatest heat-producing component by far. However, with GPU clock frequencies as well as the FSB frequencies going well over 133 MHz, the need for better cooling of graphic adapter and northbridge chipset becomes inevitable.

The aim of this short article is to mention the reason for watercooling implementation on the VIA KT133A chipset as well as to present one way of making a complete chipset watercooling system, comprising a waterblock assembly and mounting elements.

It is well known that the amount of heat dissipating from a chip increases with the rise in frequency and core voltage it operates on. It is also well known that these two main parameters are mutually connected, i.e. it is usually necessary to increase the core voltage to obtain a stable operation at frequencies much higher than the default one.

Since I decided to push my AMD Duron 700 CPU to the limit, I modified my ABIT KT7A motherboard to raise the Vcore value to 2.11V, which, in combination with good CPU watercooling, made the (otherwise very overclockable) Duron 700 run as high as 1050 MHz. The detailed description of the watercooling system in my possession, as it was before the voltage modification, is
HERE.

However, the total frequency value as a reference is nearly not enough to show the improvement in CPU performance in comparison with the default settings. In other words, CPU (and the whole system) is not going to perform the same if the 1050 value is set with the multiplier of 10.5 and FSB of 100 MHz comparing to 7×150 MHz setting.

Common knowledge and sense tells us that the latter one will be the overall winner in almost all kind of applications. Nevertheless, setting the FSB to 150 MHz runs the northbridge chipset under considerably higher load. My experience shows that the voltage has to be increased from its default value of 3.4v up to 3.8v or even 3.9v if one wants to achieve absolute stability.

I was very much interested in the operating temperature of the northbridge under this kind of load, so I made a simple instrument of my own to measure it.

Since my ABIT MB does not support the usage of an external thermistor (which could be put on any position inside the case), I used the old, very thin one from my old ASUS MB plugged in a FLUKE A77 multimeter set to measure resistance. With the help of a precise thermometer and a bucket of hot water that was cooling down very gradually, I managed to draw a chart with temperature-resistance correlation for a pretty wide range of temperatures.

Now I use this setup to measure the temperatures anyplace I need. I am well aware that this is not precise enough, but I consider it good enough for comparison.

I measured the northbridge temperature with the standard ABIT HSF attached to it and came to a very disappointing conclusion: With a voltage set to 3.8V and FSB to 140 MHz, the temperature was going over 50°C, which is more than the operating temperature of my CPU by far. I have tried to push the FSB up to 150 MHz with a multiplier set to 6.5 and a voltage of 3.9V, but to no avail.

Memory tests were reporting trouble with my PC133 memory. Then raised the Vcore value to 2.11v and things got little better, but stability could still not be achieved over 146 Mhz FSB. That was the point when I decided to put the third waterblock to cool the northbridge in my PC.

Changing The HSF With A Waterblock

The removal of the original HSF lead to a disappointment – the heatsink had a small amount of white thermal paste smeared over only a small portion of it, and NOT in the center. It was obvious that the contact with the chip was inadequate. Then I was able to take all the measures that I needed to make a waterblock and a mounting clip.

Everything that is going to be mentioned in the text and pictures that follow is carefully done, checked and rechecked, and finally, put to work. One who wants to make the same or similar setup of his own can use the drawings, measures and the explanations as a guide.

Of course, there is a lot of work involved in making this kind of system, so finally, everything depends on the abilities and knowledge of the individual. The data and drawings are accurate for the ABIT KT7A motherboard, but I assume that it will work on a lot of motherboards utilizing the same chipset (VIA KT133A). 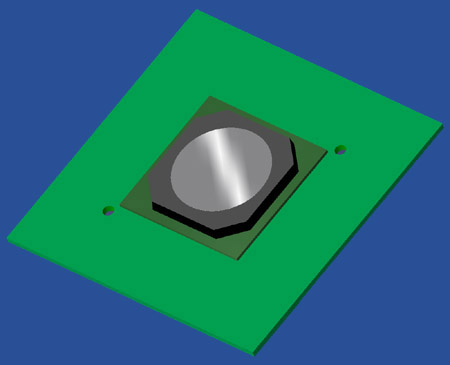 Shown above is what you are going to see after the HSF removal. Of course, only a portion of the motherboard is shown. I noticed that the area of a black plastic around the metal core is a little bit higher, so I used an abrasive paste to even everything down.

This ensures a good chipset-waterblock contact which is essential for good heat transfer. Of course, it is mandatory to protect the surrounding area during this operation, so I used Autoclave tape for that purpose.

The two holes that you can see are there for HSF mounting and could be used for the waterblock mounting too. Here 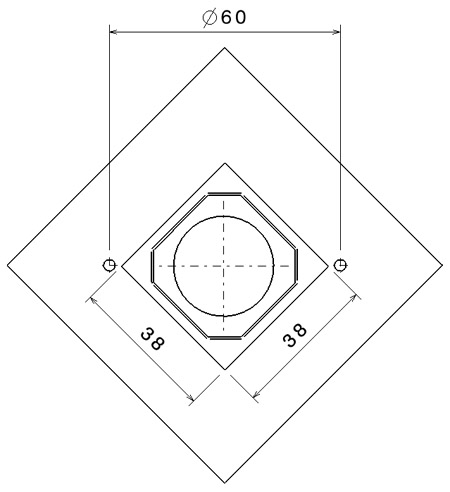 you can see all the measures you need for a waterblock and mounting clip design. As obvious, the dimensions of a waterblock should not exceed 40x40mm and I find it quite sufficient. I used a plate that is 10mm thick. Thinner plates should be avoided, since it is hard to make precision channels in it. On the other hand, thicker ones are OK, but I believe that they have no advantage compared to the one I have used.
{mospagebreak} 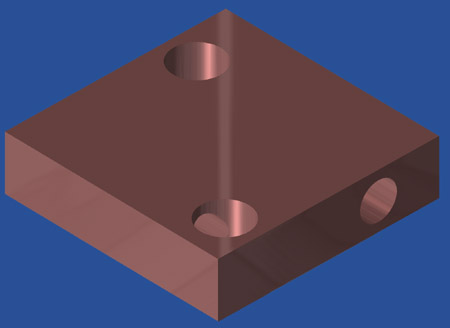 Above you can see how a finished cross-drilled copper waterblock should look like. There are two holes on the top for nipple fitting – I made an M10x1.25 metric thin threading for that purpose. It is very important to make a hole with a depth just a hair shallower than the plate thickness.

On the sides there are three channels that connect the inlet and outlet holes on the top. This is a very simple design and, as far as I know, quite sufficient for this application. This cross-section drawing 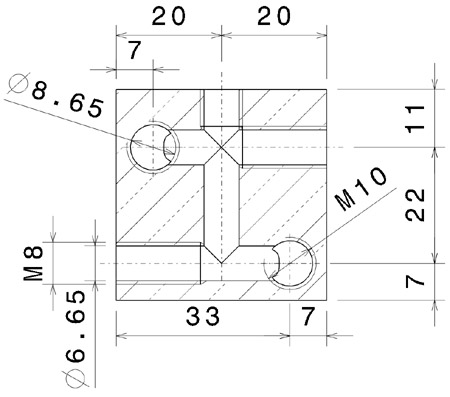 shows everything one needs to know if he/she wants to make such a device. Of course, some basic technical knowledge is necessary for understanding this kind of drawing.

As you can see, the channel’s diameter is 6.65mm, which is normal for M8 thick pitch threading used for plugging the unwanted but inevitable holes in the waterblock wall. The main channel extends along the center of the waterblock, which is a good solution since the highest chipset temperature is supposed to be right under it. The vertical holes for nipple fitting are 8.65mm in diameter, which is normal for making an M10x1.25 thin pitch metric threading.

The plugs that I have used are Allen type through bolts. Of course, some kind of sealant has to be applied before screwing in and the Teflon tape does that job quite well. Here 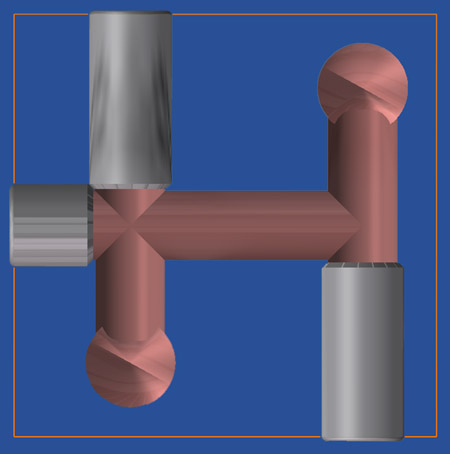 you can see how do the channels look after being plugged with the bolts of adequate length. I think that this solution is better than the one with short bolts, since the dead-end channels could produce turbulence and higher resistance in the waterflow.

The nipples that are used for this project are made in a small workshop simply because there was no place in my neighborhood where I could purchase them. If you buy or make them yourself, there is one thing that you have to watch: The length of a threaded part that screws into the waterblock should be as short as possible. 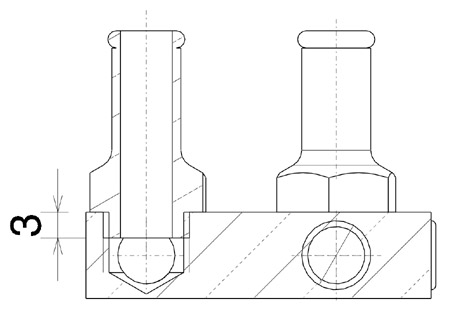 This cross-section drawing of the waterblock assembly clearly shows the reason: If the nipple enters the waterblock more than 3-4mm, it can make a significant obstruction in the flow of the water. That is the main reason why I have used a thin metric pitch for this threading. Of course, Teflon tape is used for sealing. 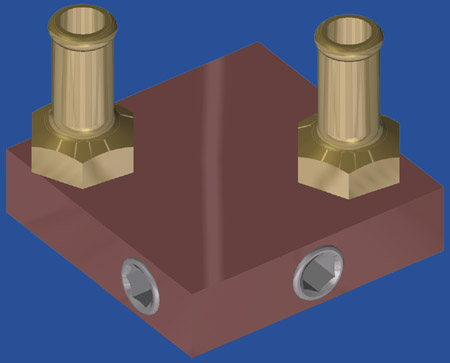 There are two nipples (inlet and outlet one), as well as three Allen type through bolts (one not visible) for plugging the holes where the drill bit was entering the copper plate. This type of waterblock works fine on my system and I think that one inner channel is quite sufficient.

However, if someone thinks that few smaller connecting channels are better than one of a larger diameter, there is always an option for drilling two or even three small channels. This kind of waterblock is shown below: 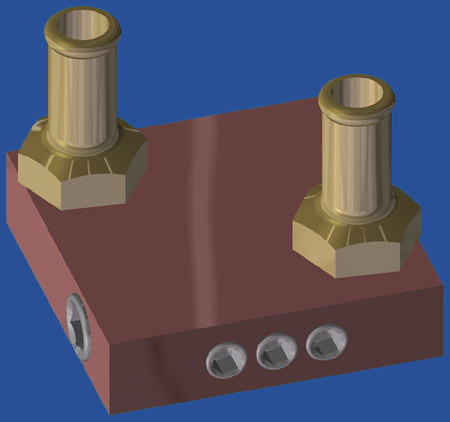 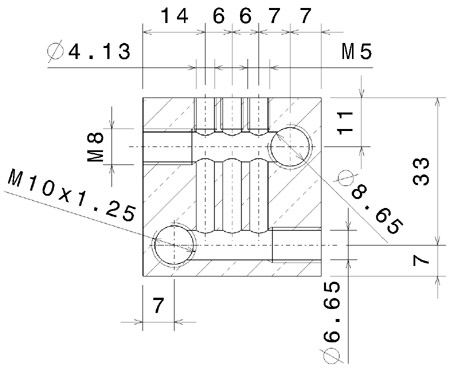 is a detailed cross-section drawing of a waterblock with two main and three connecting channels. The main channels are exactly the same as in the previous example. The connecting ones are of a small diameter (suitable for an M5 thick pitch threading) so three of them could fit in. I am not sure if this solution is better or worse, but the differences in heat removal performance between the two are definitely not significant.

The simplest way of mounting the waterblock is to use the existing holes in the motherboard. Their diameter is 3mm, so that’s the diameter of the bolts that should be used. I used plain metal bolts with insulating washers, but using plastic bolts is strongly recommended. 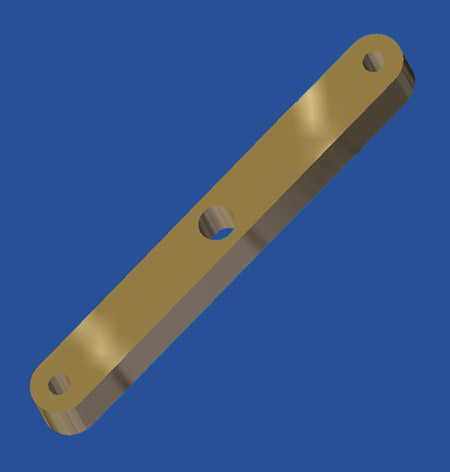 The main mounting element is a solid brass bar shown above. It has two smaller holes at the ends and a central one with a threading or a tightening screw. 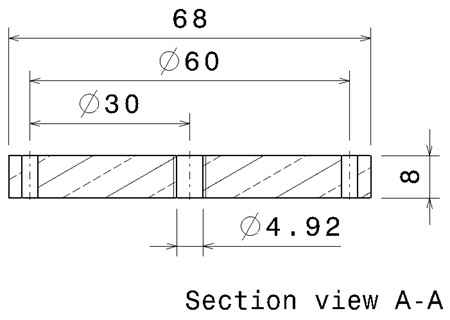 Shown above are all the dimensions in detail. Of course, one can use a different type of mounting clip, but I consider this a reliable and simple solution.

After application of a thin layer of thermal paste, you can put your waterblock on the chip and the clip on top of it. Leave the tightening bolt in the center completely unscrewed. Try to tighten the two bolts as evenly as possible, bud do not over tighten. After securing the nuts (you can use some glue or safety nuts), finally tight the center bolt and the mounting job is finished. The complete assembly is shown below: 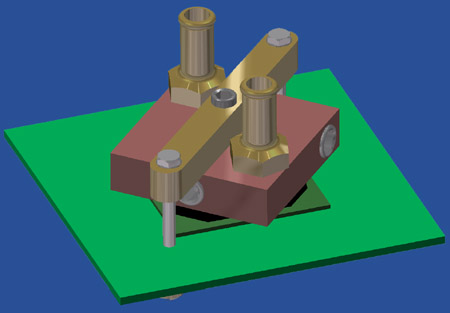 The two bolts used for the clip mounting could be put directly through the holes on the motherboard (with insulating washers, of course), but it could be a good idea to have one more brass bar under the motherboard, as shown here: 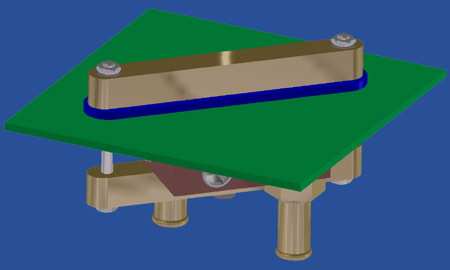 Of course, there must be a good insulator between the two (shown in blue on the picture). The bar is the same as the upper one with the absence of the central bolt. This solution relieves the motherboard of any mechanical stress created by the mounting elements, but there could be a possibility that you would have to modify your case to make room for the parts under the motherboard.

Watercooling of the northbridge makes it run definitely much cooler than with an original heatsink. With this system, I am able to use 150 MHz FSB in my PC with a chipset running at 3.9V. The temperature, however, never goes over 37°C which is excellent comparing to previous 50°C+ and the stability is perfect.

The gain is probably not substantial enough to be a reason for making a special northbridge watercooling system, but if you already have one for your CPU it could be a good upgrade to add one more waterblock and take the heat away from your hard-working chipset.


An Introduction To Extreme Cooling

Want extreme cooling for your PC but already have a heatsink and fans. Cool it down with dry ice, liquid nitrogen, or liquid helium.

SUMMARY: Lots of surface area with a so-so copper base but close to Alpha PEP66 performance – a good buy at the right price. Dave over at Overclock Warehouse.com was kind enough to send us a sample of a very