How-To use an 80mm with no effort — Juan

I have an SK-6 with a NIDEC 80mm fan @ 2900 rpm (very quiet). It originally came with the Delta 38, which almost screwed up my computer because I plugged it into the rpm monitoring connectors on my motherboard. I later plugged it directly to the power supply plugs.

Then one day it dawned on me: Damn! If I turn the 80mm a few degrees, the clips from the heaksink can hold an 80mm fan very nicely, as you can see in the pic (sorry for the crappy pic – I don’t have a digital
camera): 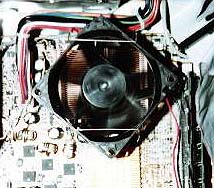 The fan would wiggle around a little if I moved it, so I later soldered small copper pieces on each top corner of the heatsink, using plumbers solder (not shown in pic – I just figured that one out not too long ago).
The copper pieces hold the fan very snug, PERFECT!

Sure it looks crappy, tilted a few degrees, but it’s many times quieter than the Delta 38 on my non-overclocked system – an Athlon 1333 on a Gygabyte GA-7DX (I know it’s not an overclocker’s board – I jumped into DDR head first. If you recall, this was one of the first DDR boards out there, this is my reliable computer, I must have a computer that works all the time).

The Athlon 1333 is challenge to cool even when not oveclocked!

NOTE: Shawn installed his AquaStealth placing the radiator at the rear of the case – this avoids dumping warm air into the case interior. Here is how I installed my AquaStealth. I used a new cheap case and some JB

SUMMARY: The BE Cooling radiator is the best one I have seen for in-case cooling. BE Cooling makes the AquaStealth water cooling system; I have used it for about 9 months now and one thing I like very much is