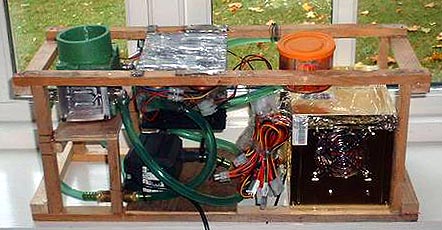 After spending some time at the Norwegian Overclocker forums (overklokking.no),
I kept on watching a lot of people asking about peltier-cooled Coke or other liquids (mostly beer).

After talking a lot about how to accomplish such a project, many people said they were going to make
one. The worst idea was put out by Alexander Albertsen, one of the moderators and writers, who
said he was going to use 5 peltiers and a homemade PSU.

But after spending a year in total silence, I thought I might give it a shot myself.
And this is how it went:

SUMMARY: Thermosyphons – one tube at least as good as two. In our quest to reduce costs as much as possible, we decided to remove one of the stainless steel tubes leading to the condenser – there is no reason Read More

The Palomino Herd Is Starting to Thin Out

Thanks to all who responded to my question: This is what you told me: 1) Most XPs sold lately were made between weeks 20 to 26. The latest one reported was week 32. 2) There were earlier ones floating around, Read More

Adrian Rojak Pot has an an article about all the people stealing his work and pretending it is their work. This is a pretty common occurrence for websites. It happens to us fairly often, and the response we get is Read More