G.Skill, well known in the enthusiast segment for their high-speed memory, has been at it again and are displaying their highest speed DDR4 memory kits at Computex. Founded with performance in mind they continue to deliver top performance across a variety of platforms and this year is no different. Have a look at the kits below and you be the judge.

This TridentZ RGB DDR4 kit came in at a blazing 5066 MHz in dual channel with timings of CL21-26-26-54 no mention of voltage to attain that speed but the demo was done with open-air cooling for the DRAM modules. As with most high-speed memory, this kit was based on Samsung “B” IC which is the only IC at this time capable of reaching these speeds. The system used was based on the MSI X370I Gaming PRO Carbon AC and the Intel i7 8700K which is water cooled by a monoblock covering the VRM as well. 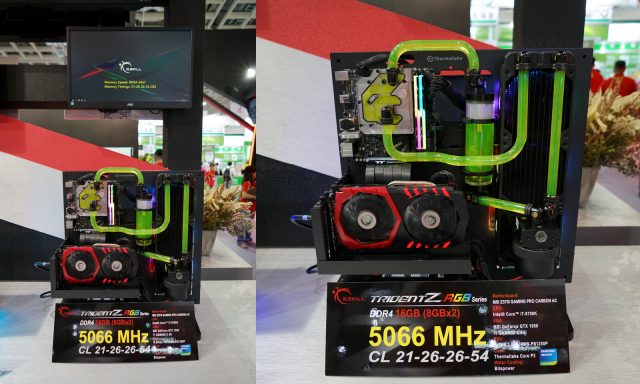 Now, this I find intriguing. A memory kit running 4800 MHz with timings of CL 17-17-17-37 is very impressive. Again this 2×8 GB DDR4 kit is based on Samsung-B die ICs and running in an ASUS Maximus X Apex with an Intel i7 8700k. Just as with the previous demo there’s no mention of voltage needed to perform such a feat. I would also like to mention that RAM speeds of this nature also require the right CPU as not all 8700k are created equal and won’t be able to operate their IMC at this speed.

This time G.Skill has chosen an ASUS ROG Maximus X Hero combined with an Intel i5 8600k to demonstrate a 4×8 GB Trident Z RGB kit running 4600 MHz at CL 18-18-18-38. Just like the last two kits, this memory is also based on Samsung-B die IC to attain this high clock, low CAS performance. You can see the system below nicely water cooled in an InWin case. 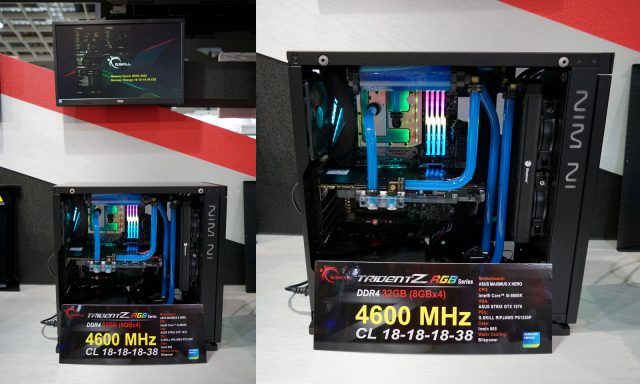 It appears that G.Skill has something for almost everybody at this year’s Computex display. Here we can see the fastest 4×8 GB Quad-channel kit in the compact SO-DIMM format. This brings high-speed memory into the ever popular SFS builds with timings of CL 18-18-18-38 at 4200 MHz for motherboards that require the So-DIMM modules such as the ASRock X299-ITX/ac you see below. The ASRock motherboard is also water-cooled with a full cover monoblock to keep that i9 7940X cool. I have to say that 4200 MHz memory is quite a feat on that CPU. 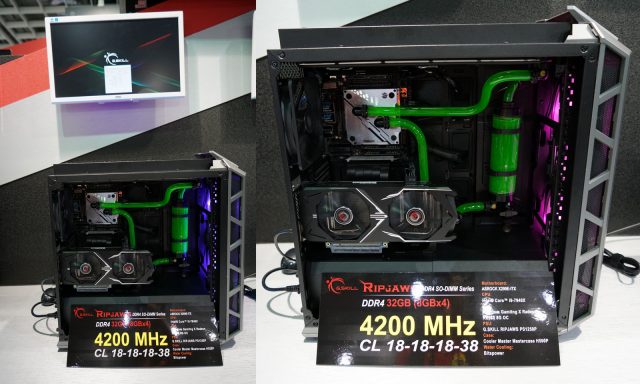 To round things off they have an offering for the new AMD Ryzen based systems. Below you can see a set of Samsung-B based TridentZ RGB DDR4 running 4000 MHz at Cl 18-22-22-42 which is blazingly fast for the AM4 platform. The demo used an AMD Ryzen7 2700X in an ASUS ROG Crosshair VII Hero, again water-cooled with a full monoblock. 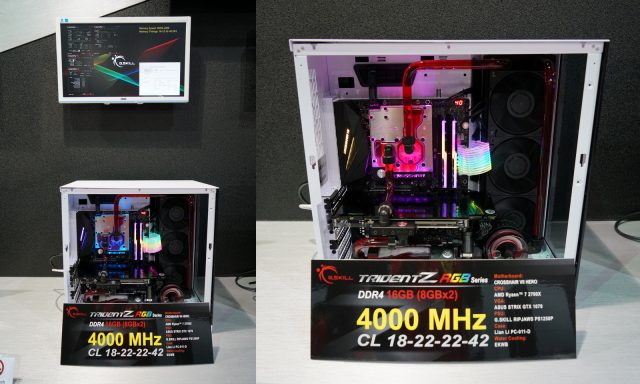 That wraps up the G.Skill demonstration, no word if these are retail samples or just specialized work from G.Skill for Computex 2018 but they were impressive none the less.

ADATA is joining the ranks with their first LED RGB memory line, the XPG Spectrix D40. ADATA has sent us a 2×8 GB kit of 3000 MHz DDR4 from this line for testing. Read More

My first experience with G.Skill RAM was as a moderator of the (dearly departed) abit forums. They. Just. Work. We’d recommend them all the time because once you set the BIOS properly, you were done. In an Overclockers.com exclusive, the kit we’re looking at today is one of their highest, the PI series DDR3-2400 4Gb kit, model # F3-19200CL9D-4GBPIS. Read More