The good guys at Cool-Computers sent me a sample of their chipset waterblock to try out. This little gem is sized to cool one of the performance stumbling blocks on your motherboard – the Northbridge chipset. Installing it is no big deal (outside of removing your mobo from the case), as shown below: 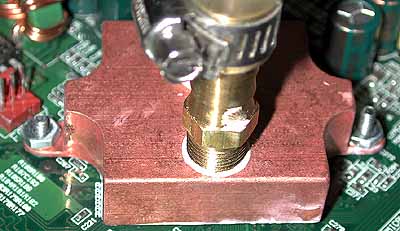 In testing the Cool Computer’s unit, I tested with and without a peltier. Now, there is a reason for this, as shown in this email from Benjamin Berglihn, from Norway:

I haven’t read much on the net yet about KT7A’s that have reached high FSB’s, but i think mine does quite well 🙂 Anyways, here’s my setup:

As you can see, I’m no millionaire, but I like to see myself as this hardware’s worst nightmare! 🙂

RAM? Chipset? Hmmm, I had to find out, and since theres no PC150 RAM available around here (Norway), I decided to use my FOP32/52W peltier on the KT133A northbridge! Lot’s of mods to the FOP32, but it fits, right next to the FOP32 on my Duron – looks like a Dual-something!

So thats my experience with the KT7A. What do you think, is 165 FSB and stable any good? Or is this people’s average results maybe?

Now this is interesting! We all know that cooling the Northbridge is a MUST, but will supercooling do us better? So I accepted the mission and proceeded to do this: 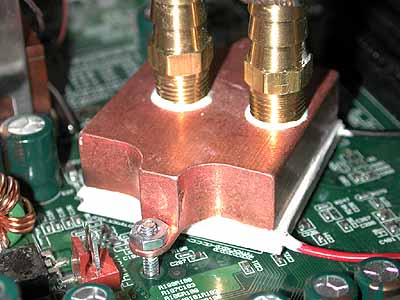 What you see is a 40 watt TEC installed directly on the chipset – I have a copper coldplate around someplace, but I wanted to try this out so I slapped it on without one. Also notice there is no insulation – you will need it if you run this setup much below ambient. Anyhow, the objective here was to find out what benefits, if any, we can get from better cooling this little hot spot.

And these are the results from Si Sandra 2001, below :

The Iwill KK266 will now post at 170 FSB with Crucial’s PC133 at CAS 3, although I can’t represent that it is absolutely stable. At CAS 2 and the fastest settings in BIOS, I can run at 160 FSB. With just plain water cooling, I can run at 155 FSB, which is about 3 MHz more than what I can do air cooled. I measured chipset temps with a probe on the back of the motherboard; with the TEC, back temps at 170 FSB were 10-11 C, and with just watercooling, 40-41 C.

A LOT of money is being spent on RAM that purports to be PC150, PC166, PC170 and even PC180 by our readers, with the expectation of significant performance improvements.

There are two issues that are working against significantly higher FSBs:

Ed wrote up a piece about PCI HERE – it’s some common sense about what to expect when you really push FSBs hard. I have done some RAM tests, and the results I found were bounded by what you can expect on your motherboard, NOT what the RAM can do in some isolated RAM tester. After all, we run RAM on motherboards.

What YOU can expect from your motherboard with a particular slice of “high performance” RAM may be better or worse than what we find in our tests; however, MOST of you will find results similar to what we find. I am going to do some more “extreme” RAM testing with the TEC cooled Northbridge to see how these sticks perform. However, unless you’re really aggressively cooling the Northbridge chipset, good quality PC133 CAS 2 is probably going to do you fine.

So I am indebted to Benjamin Berglihn for alerting me to just how key Northbridge cooling is – I’m sure some of you have similar experiences, so send them on in and let’s see what’s possible.

Thanks again to Cool-Computers for sending the chipset waterblock to test out. At a minimum, water cooling the Northbridge should give you more stability than air cooling. If you have a crummy OEM chipset fan and use air cooling, waste it and get something like a Lasagna chipset cooler.

A promising technology but a flawed implementation. — Joe