News Ticker
Warning: This modification will void your warranty – Do this at your own risk!

It is summertime, and it is getting warmer every day. Most of us will see increasing case temps as well as core temps. I have an Asus v6800 GeForce DDR Deluxe video card in my computer, and I decided this would be a great time to mod it to keep it chilled a bit. It is no secret that these GPUs generate A LOT of heat, and as the overclocker I am, I want to remove this heat (As cheaply as possible).

First of all, the GeForce was equipped with a tiny cooler. “Someone” forgot to take a picture of this cooler (how dumb am I?), so you will have to settle with this picture from ASUS, where you can easily see the stock cooler. Tiny, isn’t it?

I had to find something else to put there. I removed the cooler (easily done) and bought a Blue ORB to fit onto it. Crap! The Blue ORB doesn’t fit into the holes of the card, and it wasn’t much bigger than the original cooler I recently removed, so I decided to find something bigger and better. I didn’t want to buy anything else, as the Blue ORB had been a total waste of money.

Ah, after looking in some of my drawers, I found a perfect solution: The stock Intel CPU hsf that came with my P3-700 (this CPU is now equipped with an Alpha PEP66T – soon a Glaciator!) was just sitting there, looking very lonely in all its misery, being unused and all. I felt pity, and decided that this was indeed what I needed for my project.

It was a tad big, so I had to use a hacksaw to make it fit the GeForce. I removed about 2 cm from one of the ends, and it now had the proper size to fit the video card nicely.

I removed all the paste (or whatever it was?) from the old heatsink and then lapped the bottom to make it very flat and even (recommended!). I used thermal tape to mount my new video card cooler. I would have preferred to use something better, like a clip or something, but I couldn’t seem to get anything to fit nicely.

It turns out that the tape does a great job, and keeps the GPU and heatsink very well together. Time for some Arctic Silver Adhesive instead of the tape, just to make sure it didn’t go anywhere. The cooler really is a lot heavier than the stock one, and I didn’t want it to drop onto my other PCI cards below the video card.

Still a clip of some sort would have been better, but this seems to work fine for now. I check it once in a while just to make sure it is still there. No problems so far, and it’s been there for more than a month.

The hsf was black but I wanted it to look a little nicer, so it got some silver color – just to make it stand out from the crowd. The top (with the fan) got some color too. Looks OK, IMHO.

This picture shows the final “product”. The fan gets power from the motherboard, just as it would if it was attached to my CPU instead of the GPU. Doesn’t it look nice?

Below is my Aopen HQ08 case, with the BE6-II motherboard and everything. When I get the time, I will modify my case some more, but you might notice that there already is a small light bulb installed. Don’t mind the big cooler in the picture, it will soon be attached properly to the case as well. 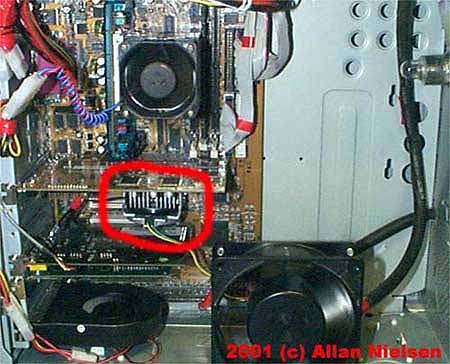 Now I bet you want to know how this monster performs, right? Too bad I haven’t been able to keep a steady ambient temperature to make some fair comparisons, and to tell you the truth, my temperature measuring methods are very questionable at this time. The only thing I have to check the temps is the Abit probe that came with my mobo.

I have attached this probe to the heatsink, but no hole-drilling has been done, and it would have been almost impossible to do a correct reading on the stock cooler that came with the video card as well. This small table shows the readings though, but I wouldn’t trust the figures all too much just yet if I were you – but here goes nothing:

The card was not overclocked itself when these things were tested. I got a few more MHz out of it when overclocking, though (speedbit reg hack), but nothing significant. The CPU temp is not that important, but I should perhaps add that all these temps are more or less idle. Vcore is 1.85, I/O voltage is 3.30.

I included a few screenshots of MBM5 to support my table above.

I can now rest assured that my GPU is fairly cool, especially when you think about how hot it must have been with that tiny stock cooler. This modification is cheap, even if you don’t have the needed things lying around like I had, and this mod is also great for showing off!

If you want to try doing a similar thing go ahead, but be careful when you mess with components like this, they CAN actually break.

Any ideas or comments can be e-mailed directly to me.

Have a nice summer and stay cool!


Disabling AGP Sidebanding With VIA Chipsets