SUMMARY: A very efficient all-copper heatsink that rivals the Thermalright SK6, using a technology that literally “shaves” fins out of the copper base.

I found the Dynatron DC1206BM-O through an ad banner on this site – I guess sometimes these ads can be useful. When I saw it, I clicked through, found a number to call and wound up buying one to test out. Apparently these are so new that they are not into retail distribution yet. I was intrigued by the fin density – 60 fins! This works out to be about 40% more dense than the Thermalright SK6 – something to investigate. 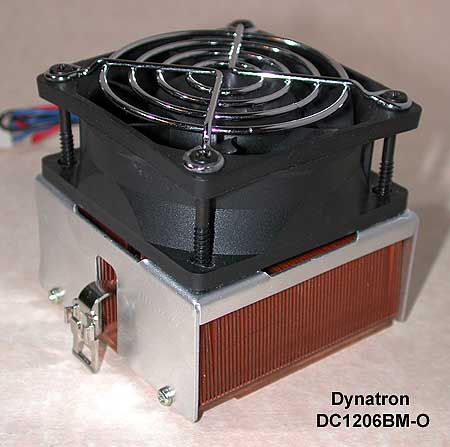 The Dynatron is no lightweight – 435 grams, almost one pound.

The technology behind forming the fins is very interesting: If you look closely at this pic

you can see that there is no solder bond between the base and the fins – they are literally carved out from the base. As I understand it, it’s like carving veneer from a log; a knife is used to shave out each fin from the copper base. If you look closely at the base of the fins, you can see a slight curve on each one.

This is due to the knife lifting each fin from the base, like shaving a chip from a piece of wood. This technology eliminates any thermal resistance due to a solder bond and is also capable of some very high fin densities – in this case, 60 fins over a 2 3/8″ span. Compare this to the Thermalright SK6, with 36 fins in 2″ – this gives the Dynatron almost 40% more fin density.

This process was developed in Japan and is being used by Dynatron on Taiwan. With 60 fins, this results in about 250 in², or about 1 ¾ square feet of fin surface area. In contrast to the SK6 at about one square foot, the Dynatron’s potential to equal or best the SK6 is apparent. 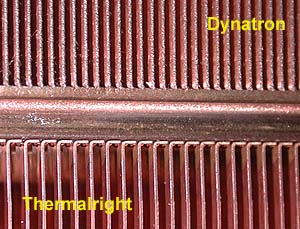 If you look inside, 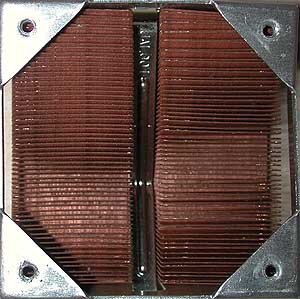 you can see that it is packed with fins.

The base is a good one – smooth, although scraping my fingernail over it, I could feel very slight machining marks. 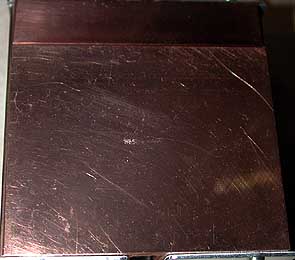 I prepared the Dynatron by boring a hole completely through the base so I could epoxy a thermocouple above the CPU. The thermocouple is attached to an Omega HH23 Digital Thermometer. Ambient temps were measured with a thermocouple placed about 1 inch from the fan’s intake. I used Prime 95 to stress the CPU on an Iwill BD133 (MBM temps are on-die) and Abit KT7. Arctic Silver grease was used in all tests. CPU Case Temp is the temp at that point where the CPU contacts the heatsink, CPU Back Temps are measured by a thermocouple on the center back of the CPU.

I tested the Dynatron with three fans: Delta 38, YS Tech 26 cfm and the “Extreme” – this is a hair dryer motor that pumps out about 80 cfm at 50 dBA – it is only used to see what very high cfms will do.

Impressive performance – competitive with the best. What is most interesting is the performance using the “Extreme” – the difference compared to the Delta 38 is better, but not more than twice as good; diminishing returns at its best.

As good as this is, however, note that performance places it among other designs with less surface area. While a priori you would expect substantially better results, I think manufacturers are bumping up against absolute performance limits – you can only squeeze so much performance out of air-cooled heatsinks, and we may be at or close to the limit of what is achievable with current designs.

The Dynatron may be the first of a series of high fin density heatsinks. Performance is on par with the best, although it takes a Delta 38 to make it so. The lack of a solder bond also means that QC is less of an issue than with soldered fins. A quieter YS Tech could be a viable option for non-critical applications.

Currently the Dynatron is only available from Dynatron.

In this article, I will be teaching you how to make a “Water Chiller”(AKA “Phase Change Cooler”).