SUMMARY: A nifty little gizmo that runs fans after system shutdown for 1-10 minutes. 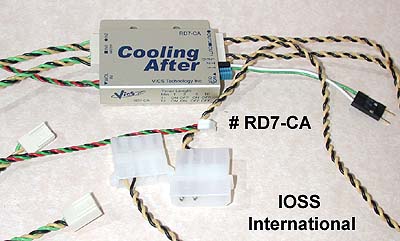 The good guys at IOSS International sent a sample of their Cooling After product. This allows users to run fans after system shutdown for 1 to 10 minutes, at reduced rpms. There are two channels available, each able to handle 12 watts.

This is accomplished by tapping into the WOL (Wake on LAN) connector available on many motherboards (IOSS informs me they will provide an adapter for another power source) to power fans after shutdown. Note that fans will not spin at full speed – how fast will depend on the fan’s wattage. Note that once you turn power off completely (e.g., with a powerstrip), this unit will not work.

The unit ships with:

You can set shutdown times for 1, 3, 5 or 10 minutes using jumpers – the settings are stenciled on the unit.

I tested Cooling After on an Iwill KK266+ with a Palomino 1200 modified to read AMD’s on-die diode temperature. I ran Prime 95 and then shutdown, with and without Cooling After installed; in this test, I set Cooling After for 5 minutes. The fan was a 60x38mm Delta (10 watts) on a Thermalright SLK600. 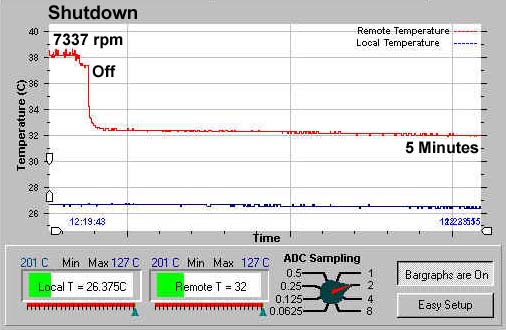 Without Cooling After, CPU temps rapidly dropped about 6 C after shutdown. It’s interesting to note that temps dropped quickly but did not decrease much, even after 5 minutes.

With Cooling After installed, the fan spun down to 2803 rpm. 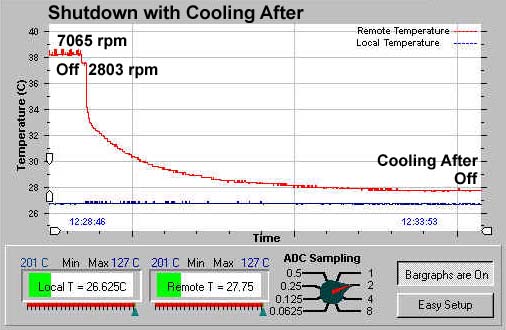 CPU temps continued to drop another 4 C compared to normal shutdown – it looks like at about 3 minutes, most of the benefit is realized. Note that Cooling After’s circuitry knocked 272 rpm off the fan – about 3.7% – the impact on cooling was negligible. After 5 minutes, Cooling After shut down.

Cooling After delivers as promised – it lets you shut down cooling gracefully.

I do see a real use for peltier systems – this will allow better TEC cooling after shutdown. Also note that you can use it for any 12 volt device, not just fans (up to 12 watts); if you have a waterpump on a 12 volt relay, this will run the waterpump for 1-10 minutes after shutdown.

Thanks again to IOSS International for sending this our way to check out.

Computex: View From The East

SUMMARY: Visiting Taiwan and Computex is like the kid who got locked in the candy store – this is the motherlode. I decided to go to Computex this year because I felt it was important to get up close and

May 25, about eight weeks from now, is going to be an important symbolic date for overclockers. This is the tentative date for the launching of socket 939: motherboards and processors. It will be around then that we’ll find out