Amazing how much difference a shroud makes – James Orrand

I had been running a BECOOLING copper water block and the small 5×5 BECOOLING radiator for quite some time. This was adequate for my Duron 650 running at 1000 MHz that the water cooling system was originally designed for, but it was being taxed by the current 1.4 GHz T-bird running at 1.6 GHz and 2.01 Volts. This became more evident as summer came into full swing. 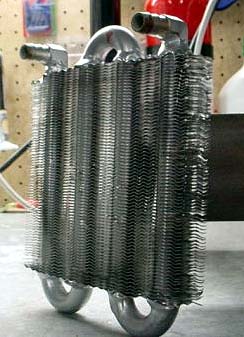 I started looking into ways at increasing the efficiency of the water cooling unit I had designed. To see the original specs of the water cooling system check out my previous article Detailed Water Cooling (and other tricks). In my research, I came across some new radiators that had hit the market since my original BECOOLING purchase, such as the Black Ice Xtreme. This looked like a nice heater core design but was quite pricey at nearly $80.00.

Doing more research and perusing the Overclockers.com Forums, I found that a 1986 Chevy Chevette Heater Core was basically the same design – only a tad larger and MUCH cheaper. I decided to try one out and picked one up from Auto Zone for $16.99. This core would fit a 120mm fan nearly perfectly and will work well with my plans of adding a fan shroud. 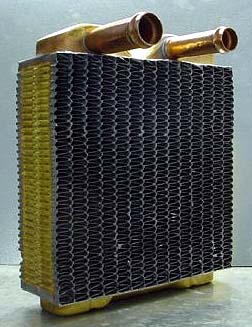 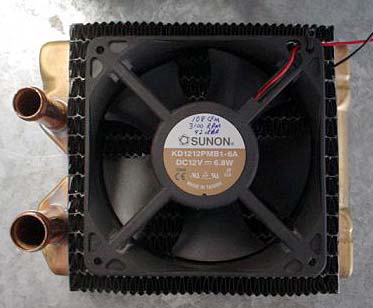 This heater core has one ½ inch barb and one 3/8 inch barb. The heater core measures right at 6.25″ wide by 7.25″ tall. I thought about using 3/8″ silicone tubing stretched over the barbs, but later decided to cut the barbs on the heater core off and sweat on a pair of 3/8″ barbs so that I could use vinyl tubing, which I prefer. 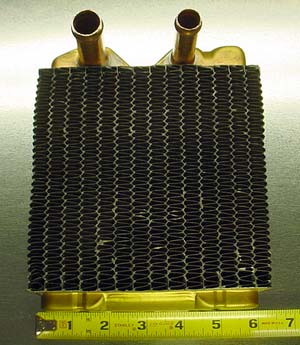 I used a Dremel tool to cut the heatercore’s barbs off and a small propane torch to sweat the 3/8″ barbs on. The only thing you have to watch is the solder around the edges of the heater core. The solder they use putting these heater cores together melts at a relatively low temperature. Make sure the solder you use on the replacement barbs also has a low melting point or you’ll end up heating the core up enough to melt the solder in the joints before your new solder melts. This will cause leaks.

If you’re unsure of the specific melting points of the solder, check with a local heating and air shop and they’ll get you what you need for cheap. A buddy of mine that works in heating and air helped me with mine and had a stick of what I needed in his work van. Sweating the new barbs on is fairly straight forward. Just be sure to clean the mating surfaces with a wire brush or sandpaper before sweating. After the core cooled down, I hooked some tubing up to it and put it under water to do the bubble test. No bubbles, no leaks.

The radiator upgrade made a small difference in my max load temps, lowering them by about 4 degrees Celsius. For a $16.99 upgrade and about 20 minutes worth of work, it was well worth it. With that part of the project complete, I began looking for a fan shroud.

I found several fan shroud designs on the net, but most required a specific heater core be purchased with the shroud. This got into more money than I felt these parts were worth, as well as limiting what heater core I could use. I decided with a little time I could design my own fan shroud to custom fit the Chevy Chevette Heater core. Best of all, it would be VERY inexpensive.

I began by making several templates using Post It Notes. Don’t laugh – they were cheap, readily available, and I had a lifetime supply at my desk. After going through several iterations, I finally had one that appeared to be strong as well as easy to make. Once I had the final design made out of a Post It Note, I began making an actual full size prototype out of paper. 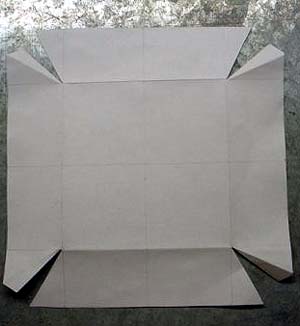 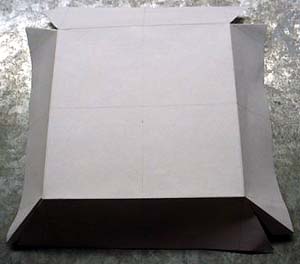 I took several measurements from the heater core as well as the 120mm fan. Then I had to rummage around in the old brain and remember some of that geometry I thought I’d never need. The geometry would be used to determine the angle at which the bends would have to be made in the shroud to give me the proper distance between the fan and the heater core.

I decided the best compromise for maximum air flow that would leave some room in the computer chassis would be a 1.5″ distance between the heater core and the fan. Using geometry, I determined that the fan shroud’s sides would need to be 1.625″ long and bent at an angle of 67 degrees in relation to the fan. The angle isn’t that big of a deal. If you have the length of the sides correct, when all sides are bent they’ll touch together at just the right points.

Happy with the prototype, I made a trip to the trusty Home Depot where I picked up a 2′ x 3′ piece of sheet metal. There were two kinds of sheeting, both the same size. The only difference was one had a ½” lip on it so two pieces could be joined and the other piece was completely flat. The piece that was completely flat was $2.00 more. I bought the piece with the lip on it and just cut it off at home. The cost for this piece of 2′ x 3′ sheet metal was about $3.50. 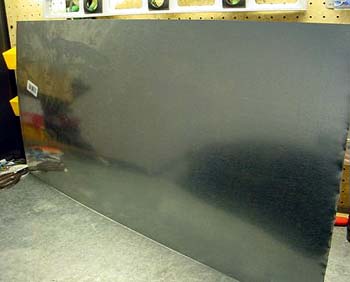 Using the paper prototype as a guide, I began cutting the fan shroud from the piece of sheet metal. I took the size of the fan at 120mm, which is about 4.75″ and added 3.25 inches (1.625×2 for each side). This gave me the total size the sheet metal should be cut to which is an 8″ square.

With that piece cut out, I used a protractor to mark the angles where bends would occur and I drew a grid on the sheet metal to keep my bends straight. The bends in the corners would allow the shroud to attach to itself, making it stronger and easier to assemble. There are 4 angles to make at each corner. The first is simply a 45 degree angle cutting through the corner. The other three are ½ of the 45 at 22.5 degrees each. 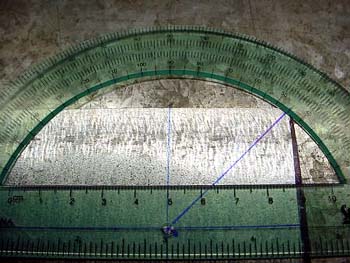 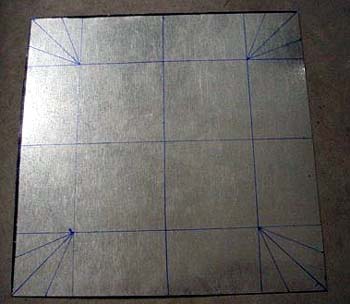 With the angles all mapped out, I used a pair of tin snips to begin cutting. This was fairly easy but care had to be taken not to over cut into the angles. Finally I took a 4″ hole saw and cut a hold in the center of the sheet metal.

Fan Shroud Prior to Bending 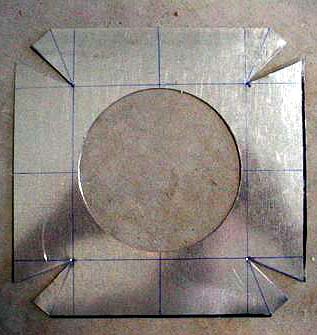 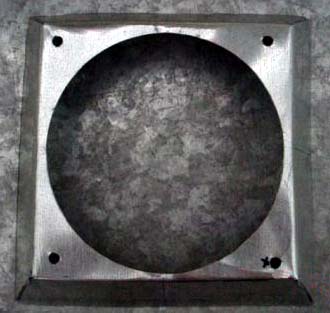 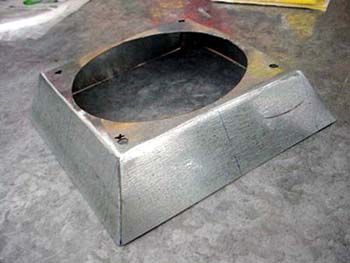 To hold the fan shroud together, I used some double sided foam tape in the corners where the two pieces of metal came together. Bending the sides together in this fashion made the shroud very strong, and using the double sided tape provided an air tight seal at the bends. To seal around where the fan would mount to the shroud and where the shroud would mount to the heater core, I used some 3/8″ weather stripping – also purchased from Home Depot for about $3.00.

Fan to Shroud and Shroud to Heater Core Gasket 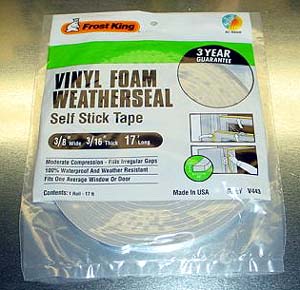 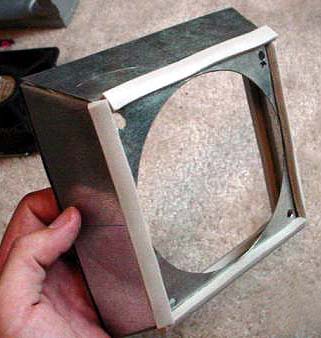 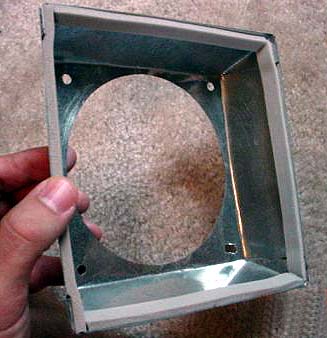 With this all complete, I started putting the system together in my case. I used some #8×32 5.5″ bolts to mount the fan/shroud/radiator assembly to the case. Large washers were used to secure the assembly to the computer case. I easily pushed the bolts through the heater core, which bent the fins out of the way and allowed the bolts to pass through. 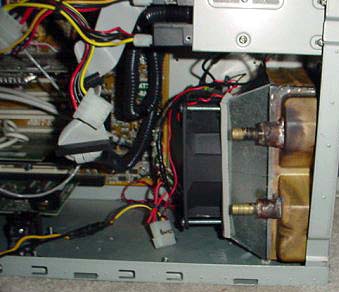 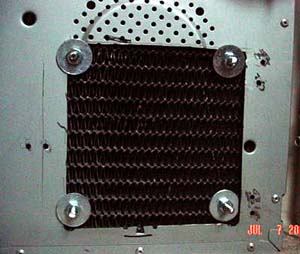 I filled the system with Distilled Water. I always used distilled water as it’s supposed to be easier on electronic components in the event of a leak – it doesn’t contain all the minerals of tap water. I have no idea if this is the case or not, and hope I never have to find out, but at 89 cents a gallon from the local grocery store, it’s cheap insurance.

I also put Erythromycin in my water. This keeps any creepy crawlies from setting up camp in my water cooled system, clogging my pump and hoses. The one time I didn’t use this, I had to change out the tubing and clean the pump and reservoir after about 90 days due to all the funk that had grown in the system. I purchase the Erythromycin from a local aquarium shop for $0.69 cents a tablet. I break open the tablet and pour the entire tablet into the water, discarding the plastic shell. 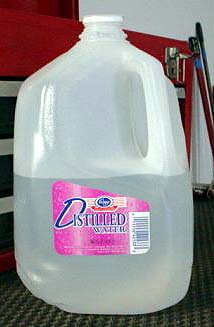 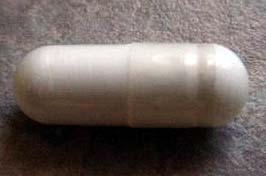 With the system filled and protected from bacteria and other nasties, I fired it up and let it run for about 24 hours to stabilize temperatures. With the temp stabilized, I began running Prime 95 in torture test mode. I ran the same test before the fan shroud was added to the system to see just how much difference the shroud would make. Following are the results:

As you can see, adding a fan shroud increases the cooling ability of the Radiator by a 40.9%. Spending less than $10.00 on the shroud and gaining 40.9% in cooling ability with just a little work was a worthwhile endeavor, not to mention fun.

An aluminum extrusion with an 80mm fan – an OK but not great cooler. — Joe