Today I’m taking a look at what many consider to be the marquee keyboard/remote for HTPC use, the Logitech DiNovo Mini.  This device is probably the most premium device of it’s type.

This keyboard is a Bluetooth wireless device, it includes a “stick of gum” sized dongle for computers not already equipped with Bluetooth.  This dongle fits in a slot next to the battery when not in use.  The remote also has a switch to toggle between PC usage and PS3 usage.

The remote operates on an included rechargeable battery and includes a charger that plugs into the remote to charge the battery inside the remote. It comes in an extremely nice box, but I would have been disappointed with anything less in this price range.

A brief overview starting at the top left corner:
An OK button which doubles as right mouse click, volume up, down and mute keys that double as a music hotkey, an internet hotkey and a power/sleep button.  Next to this is a full set of playback controls, record, rewind, stop, play/pause and fast forward.  Last is a back key which sits under the toggle switch to change the track pad to directional pad mode.

Below the multimedia keys is a compact QWERTY keyboard including Fn keys as well as shift, Ctrl, Alt, the Windows key, Enter, Tab.  There is a large PGUP and PGDN on the left side that are also zoom in and out when Fn is used. Another well thought out extra is a CTRL-ALT-DEL when Fn and Enter are pushed together.  Somewhat surprising is the lack of home and end keys and that ESC and DEL are only available as FN combos.

This keyboard’s build quality is exceptional, and key presses are solid and rarely fail to register correctly.  It does have a slightly odd sound like there is a layer of plastic under the keys but it doesn’t affect functionality.  Probably the biggest selling point for this keyboard is the backlit keys, which are by far it’s greatest feature for use in a HTPC environment.

A frequent complaint with this device is the trackpad, and I have to agree.  While it’s a workable solution, it is not the most elegant.  Particularly annoying is having to hold FN and the OK key to get a right mouse click.  I also found the sensitivity of the pad to be lacking, taking longer than most devices to scroll around the screen on my HTPC. 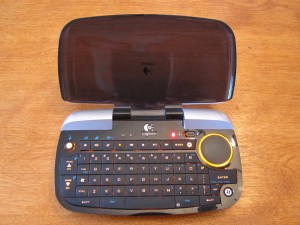 An overview showing the layout of the remote 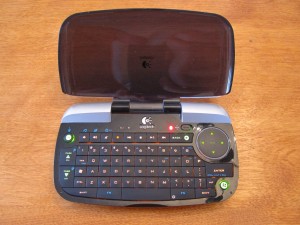 Range is excellent, 30′ is about as far as I could get from the PC and it worked great all the way out to that range.  This is consistent with Logiotech’s claim of 10 meters for range, more devices these days seem to finally be living up to range claims.  My HTPC is sitting in the open so your performance may vary particularly if your PC is in an enclosed space.

Previously I reviewed the Lenovo Wireless Multimedia Remote, so that is my benchmark for comparing this device.  This device is excellent, but it’s MSRP of 149.99 VS the Lenovo’s MSRP of 59.99  makes things a little less cut and dry.  Additionally the mouse performance wasn’t stellar which took away from the device.  The back lighting is a feature I really valued though which swings back in favor of this device strongly.

Ultimately if your main use is a wireless mouse/trackball the Lenovo remote which can regularly be had at 30 dollars or so is probably the way to go.  If you use the keyboarding features frequently and can afford it, this is probably the better choice.  The quality of the keyboard itself and the excellent back lighting makes this device nice to use.  Additionally the aesthetic and build quality of this device is definitely in a different league from most of the less expensive devices suited to these types of tasks. 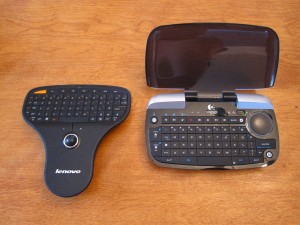 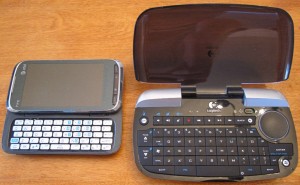 Size comparison to the AT&T Tilt2