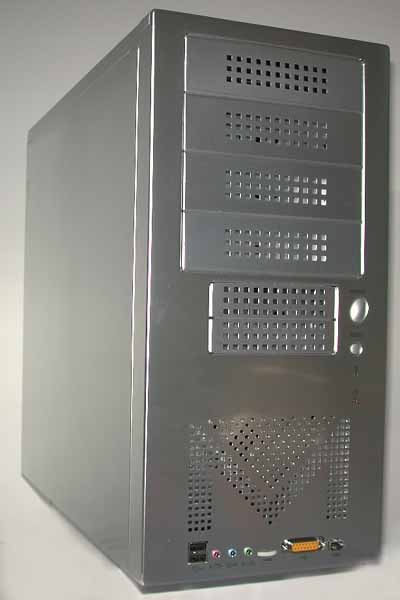 PC NUT was nice enough to send over a sample of the Eagle Aluminum Case. It looks like aluminum is the new thing in cases and you should see more of these. Aluminum has some advantages over steel:

At the same time, aluminum being a lot softer than steel, a bump that might not show on a steel case could cause a dimple on an aluminum case. All told, though, if you are big on LAN parties, then an aluminum case is a nice way to keep the weight down. 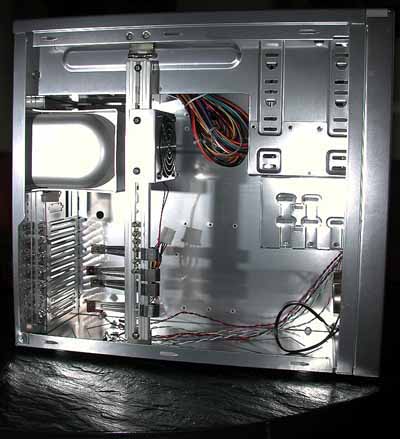 The little arms along the vertical bar are to hold PCI cards in their slots.

Inside we find a couple of nice features – a bunch of arms to hold PCI cards in place, an internal 80 mm fan for air circulation and a shroud with an 80mm fan to draw air into or exhaust air from the case (tests on this later). 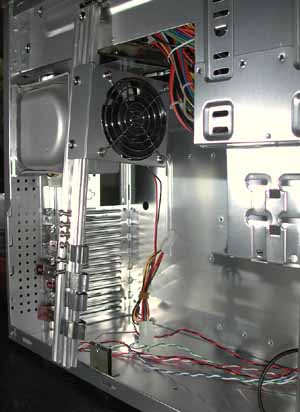 The bar swings out of the way, allowing you to mount easily mount the motherboard. It is also completely removable. The internal fan can be moved horizontally along the bar until it hits a peripheral card – in my case, the AGP card. However, it does a nice job of moving air above the AGP card, keeping the power regulators on the motherboard and the GPU on the cool side.

The shroud is a good feature: 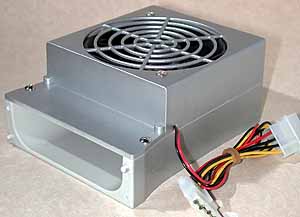 It can sit above the CPU intake fan, so drawing cooler room air into the case and aiming it at the heatsink is a nice feature. There are a number of articles on the site about the cooling bonus you get with ducts, so this is a worthy feature with this case. However, you can locate the shroud anyplace along the back’s right side, so if you prefer to cool a hot PCI card, that’s possible also. 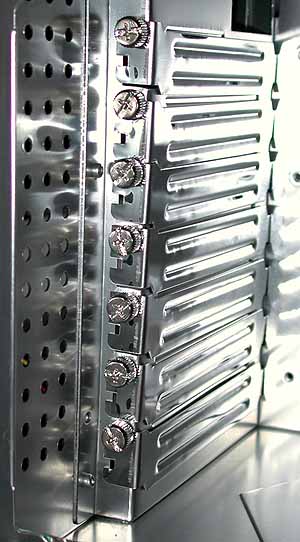 I like the use of knurled screws – makes removing the top, sides and PCI slots a snap. All of the screws are mounted by means of a steel insert: 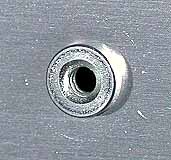 Aluminum is too soft to take repeated use, ergo the steel inserts. 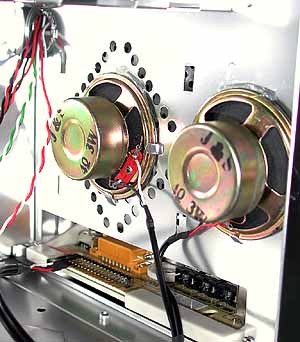 The front of the case features two small stereo speakers and a panel to allow for front mounting speaker plugs, the gameport, USB ports and a firewire connector:

There is a cable available to allow all these things to move to the front: 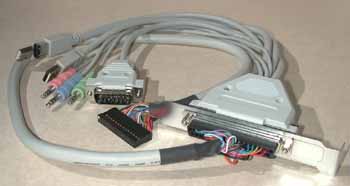 The rear is pretty standard – more on a mod here later. 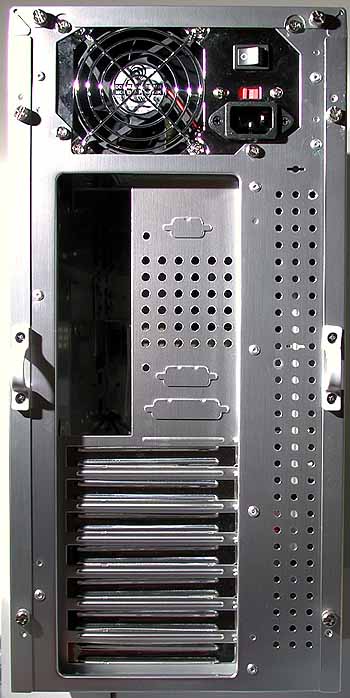 You can move the shroud to any of the holes along the right hand side.

To test out this case, I mounted an Iwill KK266 with a T-Bird running at 1200 MHz, aircooled with a Thermaltake Volcano 6Cu+. 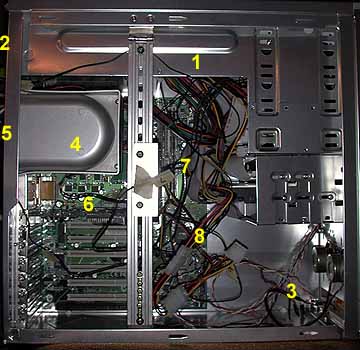 I used a Digital Doc 5 to record temps. I also recorded temps using Motherboard Monitor for CPU and Case temps (per thermistor on the Iwill KK266) and CPU temps measured by a thermocouple in the heatsink.

I first ran the test with no modifications, then I enlarged the shroud’s intake by cutting out the aluminum case as shown below:

It looks like I used a can opener! The wire is one of the Digital Doc probes.

This is messy – I was interested in its potential effect rather than making it look nice. I used a tin snips to cut out the hole; with more time, I probably would have used a jig saw and sanded the edges smooth.

I then ran Prime 95 for an hour for each condition and recorded temps shown below:

45 C
48 C
The interior fan was oriented to blow towards the CPU.

The major difference is seen in CPU temps – nearly 3 C better. Clearly, opening up the shroud’s intake significantly enhanced cooling performance. This is consistent with others who have used shrouds to great effect. Note that the bottom case temp (#3) is 4 C higher – this I think indicates that another fan to exhaust waste air would be a good addition.

With the case made of aluminum, mods involving case cutting are much easier to perform. Unless you’re willing to make some major changes to the front of this case, looks like you’ll have to work from the back to open it up for better cooling.

Aluminum cases have some real benefits – light weight, easy to mod and sheds heat better than steel. The Eagle has some features that make it a cut above some others I have seen – makes for a nice upgrade!

Many thanks to PC NUT for sending this our way!

I’ve gone to a number of forums and looked to see how pioneers were doing with 2400+. Though it’s still early, a few observations can be made: Forget An Easy 2.4GHz Presuming high-end air and not too crazy voltage (up

Skip One or Two

Got quite a bit of mail on this. Thanks to all those who responded! You basically told me one of two things: (Most of you) “I used my video card until it was awful at the game I was playing.

Somebody sent me an email asking me “Which 1200 TBird should I get?” I glanced at it, didn’t really look at it. Being persistent, the person sent it to me again, and this time I looked. The place was a