For die-hard liquid cooling enthusiasts that need extra ports, EK Waterblocks just released the EK-Loop Connect. The EK-Loop connect is a combination Fan, Pump, and aRGB controller unit and is able to be controlled by software. EK says the software interface will work with all major motherboard manufacturers and easily allows you to control RGB items. Pricing at $59.99 makes this an easy addition to any liquid-cooled system. 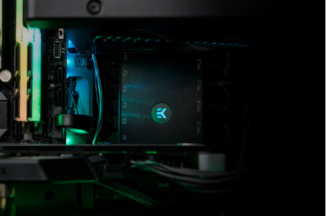 Every part of your liquid cooling system is now a mere few clicks away! EK®, the leading premium water cooling gear manufacturer, is proud to introduce the EK-Loop Connect, a straightforward information and control hub for all the relevant parameters of your liquid cooled PC.

A Fan, Pump, and an Addressable D-RGB controller unit that is designed from the standpoint of an enthusiast. With this control hub you can easily set your desired RGB lighting effects with just a few clicks, as well as optimize your cooling performance, and noise levels through a simple PWM chart or pre-defined profiles. That’s not all though, as you’ll have the option of using external temperature sensors, flow meters, and coolant level probes.

The EK-Loop Connect is one of, if not the most powerful, mainstream fan and LED controller available on the market, topping off at 170W of total power delivery. It’s capable of delivering 20W per each 4-pin fan header, combining up to a total of 120W. The industry-standard, non-proprietary addressable D-RGB headers can each handle 8W of power.

With six PWM fan headers, capable of delivering a total of 120W, the user can connect several dozen fans, as standard PWM splitter cables can also be utilized. The same applies to the D-RGB headers since they can deliver up to 50W of power in total. Each header can be used to connect multiple D-RGB products by using an EK D-RGB splitter cable. To put it into perspective, that’s enough for ~20 EK-Quantum Vector D-RGB water blocks. For specific EK-Quantum D-RGB water block power consumption check the table on our blog.

An LED overpower protection system will make sure you will not damage the controller unit or your addressable D-RGB LEDs. If by any chance, you manage to overload any of the D-RGB headers, the unit will automatically set the color of all the LEDs attached to a red color. A static red color is using only 1/3 of the total power draw and also acts as a warning color for the user to take action and reduce the number of LEDs attached.

EK-Loop Connect is connected to the motherboard via an internal USB 2.0 header and is powered by a single Molex cable. In the package, you receive a Molex -> dual SATA power adapter, if you prefer not to have Molex cables in your modular PSU.

Products that are compatible with the popular RGB sync technologies from all major motherboard manufacturers, and are using the standard 3-pin 5V connectors, should work perfectly fine with the EK-Loop Connect.

The easy-to-navigate software interface is simple enough for beginners and advanced enough for enthusiasts. All major features of the software are thoughtfully laid out to keep your custom liquid cooling loop healthy!

The EK-Loop Connect is available for order through the EK Webshop for $59.99