Enermax has been around since 1990 and started primarily as a power supply manufacturer. Since then they have expanded into cases, peripherals, fans, heatsinks, and all-in-one (AIO) water coolers. So they are definitely a familiar name in the PC market. Today we have the Enermax Aquafusion 240 up for testing, a 2 x 120 mm AIO liquid cooler with a little bit of RGB flair.

The front of the box is mostly for marketing such as the Enermax logo, Aquafusion logo, manufacturer specific motherboard RGB compatibility.  Of course, the eye-catching product image showcasing the RGB lighting on both the fans and pump top take up the most amount of space showing off what is inside.

Turning the box over, we are bombarded with all the information provided on the back on the box which includes a full specifications table, list of features, and a few pictures.

On the left side of the box, there is more detailed information in the form of a schematic which allows consumers to know the exact dimension of every aspect of the cooler so that they can be sure it will fit in their case.

When opening the box we are greeted with the User’s Manual and a white foam topper. Then, removing the topper reveals the Aquafusion 240 wrapped in plastic and nestled in a cardboard mold for protection.

The mounting hardware consists of a combined Intel/AMD backplate, AMD mounting clip, and all the various screws, spacers, washers, and nuts needed to mount the Aquafusion 240 to just about any Intel or AMD socket.

In the first picture, we have the RGB Control Box, an RGB Y-splitter to the left, Control Box power to the right, and the pump RGB cable in the center. In the second picture, is the fan Y-splitter, SATA power for the fans, and a Gigabyte motherboard RGB cable.

The Aquafusion 240 is a great looking cooler with an almost entirely matte black finish, except for the RGB lighting and a few Enermax logos. The pump, power cable, and hoses are braided and heatshrinked giving the cooler a more finished appearance.

As with most AIO liquid coolers, the pump and water block are a single unit with the pump stacked on top of the block. Other than the translucent ring around the top of the pump, the entire unit is black in color. The ring is for RGB lighting effects and the glossy top plate is actually a really dark tinted acrylic so that some RGB lights will show through there as well. I’m usually not a fan of RGB, but I have to admit, the recessed RGB Enermax logo and stripes into the pump top looks really good.

The base of the water block is bare copper without any plating, and I’d consider the base finish to be matte; even though some reflection can be seen on the base it’s not clear by any means.

The radiator is very minimal and understated with a matte black finish with a white Enermax logo on the sides. Fin density is around 19 FPI. There were some bent fins on this sample as you can see in the photo.

The fans included with the Aquafusion are the Enermax UCSQARGB12P-AQF. These are 120 mm RGB fans which run between 500 and 2000 RPM. Like the pump/block, they are solid black except for the translucent ring for RGB lighting and the white Enermax logo on the hub.

The corners of the fans have a thin foam layer for reducing noise by absorbing vibration.

The mounting process was pretty intuitive. The first step was taking the backplate, feeding bolts through the correct holes for the socket, and press fitting plastic washers down the shafts to hold everything in place.

The last few steps would be applying thermal paste, placing the pump/block combo onto the CPU, and tightening down the cooler with the included spring-loaded nuts.

The RGB Control Box uses a SATA connector for power which connects to one end, and the RGB Y-cable is used to connect both the pump and fans to the box.

Sound level in dBA was measured 10 cm from the intake fan with the fan speed set to 100%. Then, sound level was estimated for other distances using the following formula:

The performance was worse than expected with most of the coolers outperforming it by 3-5 °C on average. Although, that shouldn’t be anything major as far as an everyday driver and overclock is concerned; only when really cranking the voltage and trying to squeeze every bit of performance out of your CPU will you run into temperature limitations. 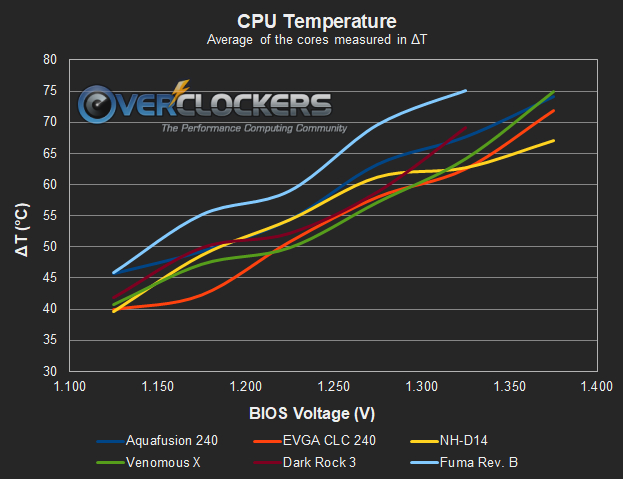 The Aquafusion 240 is definitely a loud cooler when cranked up to 100% as the following results show. So, I definitely wouldn’t run them maxed out for everyday use unless you’ll be wearing closed back headphones. Remember, this is a worst-case scenario on an open bench with maxed out fan speeds. However, like all fans, the speed can be reduced in the motherboard BIOS to fit your preference. 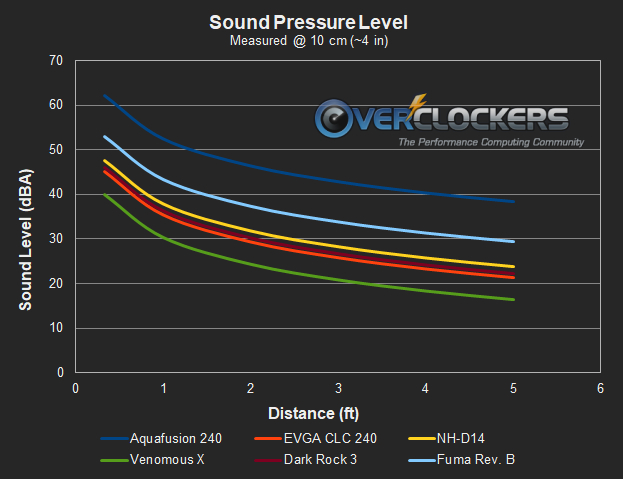 I’ve always preferred understated designs, so RGB has always been too flashy and “in-your-face” for my tastes. However, Enermax managed to keep RGB simple enough for me so that it’s not a turn-off. The lighting on the Aquafusion’s pump and SquA RGB fans are the best looking RGB accents I’ve seen. This, along with the braided tubing/wires and matte black color scheme, makes the Aquafusion a great looking cooler for any build.

On the performance side, there was nothing spectacular. Cooling performance was adequate, and the SquA RGB fans are loud when maxed out. So I’d recommend running the fans under the maximum by adjusting the speed/profile within your motherboard BIOS.

The price comes in around $110 at Amazon which is on the lower end for an RGB 240 AIO cooler. At this price, one will be trading a bit of performance for aesthetics. Whether or not that’s worth the trade-off will be up to the individual’s personal preference.

Overall, the Enermax Aquafusion 240 is one of the best looking liquid coolers around and performed well enough to recommend to those leaning more towards aesthetics than maximum performance.

Corsair has launched two new Closed Loop Coolers (CLCs) with the H100i and H150i RGB Platinum coolers. The new pair of coolers is said to have improved cooling performance and RGB lights across the fans and pump head over the outgoing non-platinum family. Corsair says this is the first Hydro series coolers to feature customizable RGB lighting on both the fans and the pump head.

Corsair launched three new products today. The first is the K70 RGB TKL Gaming Keyboard, the 60% keyboard from Corsair that we’ve all been hoping for. The K70 RGB TKL comes available with a selection of 100% CHERRY MX Red, Silent Red, or SPEED Silver mechanical key switches and is a tenkeyless design. Also in today’s announcement are the Corsair Sabre Pro and Sabre RGB Pro gaming mice. Both are equipped with 8,000Hz polling and AXON hyper-processing technology. Availability is reported to be immediate. The K70 RGB TKL Cherry MX Speed is listed for $139, while the Sabre RGB Pro is $59.99 and the Sabre Pro (non-RGB) is only $54.99. Here is the official press release from Corsair.

The second year is starting for the DDR5 memory series, and we finally have a chance to check Silicon Power’s latest offerings. Silicon Power maybe isn’t the most popular brand, but it is expanding each year and delivers great products at a reasonable price. The new Zenith DDR5 memory series is precisely one of those products, so I’m sure it will interest our readers. Today’s review presents a memory kit that should meet the needs of gamers and all those who care about stability more than breaking world records.

Nice review and it looks like a great product!

It's good to see more PC parts manufacturers getting into the AIO business. Next breath is that just jumping on the bandwagon isn't enough. I'm sure there are technical hurdles to entering this market as well as patent and trademark issues. Too bad they couldn't release a top performer in this arena but I guess it's just something you have to grow into. Nice review Matt.