Reality? Depends on what side you’re on – Greg Gervin

There are two sides to AMD’s “Reality Check” – what AMD thinks it’s getting across, and what the audience perceives; here’s one view from Warhawk: 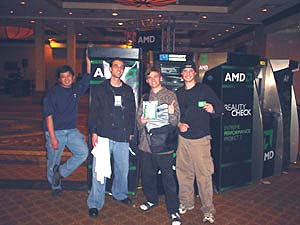 The AMD Reality Check tour is a an AMD promotional event that is visiting several cities across the country. The purpose of the event is to extol the virtues of the AMD processor and to give away lots of free stuff (thereby turning computer geeks into walking AMD advertisements).

QueMine and I attended this event. It took place in one of the large convention rooms at the DoubleTree Hotel. We arrived at the event, filled out our registration cards and got our raffle tickets. While we were doing that, we met up with Jen from Octane and one of his friends.

At the table set up by the entrance to the convention room, we received our name badges. We saw several VIP name badges sitting there and Jen promptly announced that he was a VIP. The conversation went something like this:

None of us were really sure what having a VIP badge got you, but we were pretty sure it had to be better than not being a VIP. After filling out my name tag, I looked up and didn’t see QueMine or Jen anywhere. “They must have gone inside” I thought to myself.

Once inside, we saw that there were several tables set up on the outer edge of the room. Each table featured a different AMD partner, such as MA LABS and Chaintech. One of the table attendants wanted me to give them my business card so that we could “do business.”

At first I wasn’t sure why this company would want to personally “do business” with me. After standing there in confusion for a few seconds, we realized that only the VIPs were allowed in this room at the current time (we were there about an hour early). Apparently the first hour was reserved for “AMD Channel Partners” to walk around and talk business. Luckily, no one had noticed us walking in, so we decided to hide our non-VIP badges and have a look around.

In one corner an AMD representative was describing the thermal characteristics of the AMD processor. His explanation was very basic and we quickly decided we could easily get more info on this from Tom’s Hardware Guide or Overclockers.com.

Needless to say, Intel’s built in graphics are extremely inferior to any GeForce based graphic solution (even an MX).

Surprise – NOT! The P4 was very choppy when running graphic intensive games. There was an AMD representative standing nearby the kiosks whose job it was to say, “See! Look at how slow Pentium 4s are compared to AMD processors!” Most of the people that saw this seemed impressed, and nodded in approval as if to say, “If only my Intel buying friends could see THIS!”

I then came to the conclusion that most of the people there were either totally ignorant or where there to brown-nose with the AMD people. It doesn’t take a rocket scientist to figure out that this was an unfair comparison of processors. This comparison was really only useful for comparing the graphics solution and not the performance of the processor.

After seeing this, we knew we were in for one big giant AMD propaganda fest. Once we found out we were being intentionally deceived and weren’t even going to be seeing any demos of upcoming technology, our focus quickly shifted to finding as much free stuff as possible.

Jen went to work obtaining an AMD shoulder bag, and some of us grabbed some snacks off the food table before the non-VIP mobs were let in. QueMine was able to tweak the P4 so that it was playable on UT 2k3 and then proceeded to kick everyone else’s butt.

It was drawing close to the time where the non-VIP hordes were to be let in. We started getting nervous that our cover would be blown and we would be kicked out. They announced that there was going to be a special giveaway to VIPs only. Our first thought was, “Hey cool – we will have a better chance since not as many people’s raffle tickets are in the box yet.”

Our second thought was “Uh oh! If we do win, they’ll find out we aren’t really VIPs!” We started to get pretty worried and tried to think of what we would do if we got called. Luckily, they drew from separate VIP only raffle cards and we were saved from extreme embarrassment. 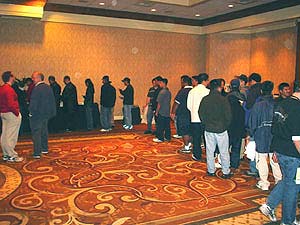 The food line AFTER the non-VIP hordes were let in.

Next, the non-VIP minions were loosed upon us and the previously spacious convention room became crammed with hundreds of people. The event got underway and everyone gathered around the stage that was set up at one end of the room.

Jen decided he was going to have as much fun as possible so he planted himself directly in front of the stage. He then proceeded to scream, shout and generally act extremely excited and/or obnoxious. By the end of the night, his voice was gone and everyone within a 5 mile radius knew who he was.

Some free stuff was thrown out into the crowd and a few processors were raffled off. Jen happened to be one of the lucky winners of an AMD XP 2400+ processor.

Next, contestants were taken out of the audience to compete in a game show like event where they had to answer questions about AMD products in order to be eligible for the “Battle of the Boxes” (which I will discuss later). Unfortunately, most of the contestants chosen didn’t know a great deal about computers and many of the nerds in the audience were shaking their head saying “I can’t BELIEVE they didn’t know the answer to that!”

Besides the game show, there were other events such as a dancing contest, and a pull-up contest. They were even able to find an Intel employee in the audience, who they then forced to wear AMD gear.

Finally, it was time for the “Battle of the Boxes” event.

What made this event really funny was that both contestants had no clue how to build a computer. 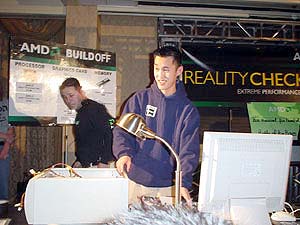 One guy took an extraordinarily long time to figure out how to even open the computer case. The computer nerds in the crowd were more than happy to shout out useful advice such as “NO! It goes in the OTHER way, dumbass!”

After almost a half an hour of computer building (about 5 times as long as any respectable nerd would have taken), the computers were finally assembled. They were both powered on and they BOTH failed to boot due to a “floppy disc error” resulting from plugging the floppy disc cable in backwards.

A moan went through the crowd as such a bonehead mistake cost both contestants 2500 dollars. I am guessing that this same mistake has probably saved AMD from having to shell out the cash more than once.

Even though it turned out to be a complete propaganda fest, we all had a great time at this event and even managed to get some cool free stuff. I am definitely going to try to attend next year’s event.

The War Approaches Your Door

News Item One: RIAA Gets Into “Sharing,” Too College students “share” files; now they’re going to “share” between $12,000-$17,000 each with the RIAA. News Item Two: RIAA To Chat With You Shortly? RIAA plans to send a million IMs a