SUMMARY: At what point do extra cfms through a heatsink hit diminishing returns? Using the “Extreme Fan” indicates how close each heatsink is to its potential.

My pal Andy Lemont at Millennium Thermal Solutions had an idea that has some real merit in testing heatsinks: Pump a LOT of air through a heatsink to see where it “hits the wall”. To get a good idea of where the wall is, Andy came up with the idea of using a hair dryer fan mounted to a heatsink – these motors pump about 90 cfm. 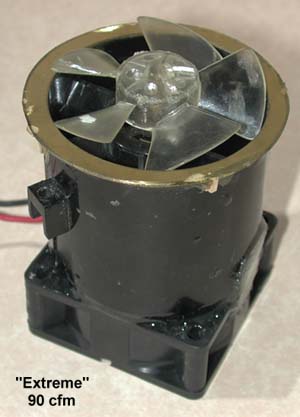 I epoxied the hair dryer motor onto a fan body so I can directly bolt it onto a heatsink.

Now, before you all start to run out and buy hair dryers to use on your heatsinks, try this: Get a hair dryer and put it inside your case. Turn it on (no heat) and see how long you can stand it. Assuming your hearing is OK, probably not more than 15 seconds. Also, hair dryer motors do NOT last – typically they are spec’d at something like a couple of hundred hours. The typical CPU fan is spec’d for something like 50,000 hours.

To give an idea of how this setup works, I tried it out on the TRIG T40-4 heatsink.

I prepared the T40-4 by boring a hole through the base so I could epoxy a thermocouple above the CPU. The thermocouple is attached to an Omega HH23 Digital Thermometer. Ambient temps were measured with a thermocouple placed about 1 inch from each fan’s intake. I used Prime 95 to stress the CPU on an ABIT KT7, running a Duron 800 @ 1000 (52.6 watts). The Duron is actually a more severe test as its area is less than the T-Bird, so there is a higher watt loading by area. Arctic Silver grease was used in all tests.

For this test, I used four fans: The “Extreme”, a Delta 38 cfm, Papst 33 cfm and the YS Tech 26 cfm. Each was mounted on the heatsink while in the socket, so there are no anomalies due to mounting and dismounting the heatsink. I used a separate power supply for the “Extreme”.

The “Extreme Ratio” is the Extreme’s C/W over each fan’s C/W; if a fan is as good as the Extreme, is would rate at 1.0. Looks like anything over 0.8 will be hard to hit reasonably. 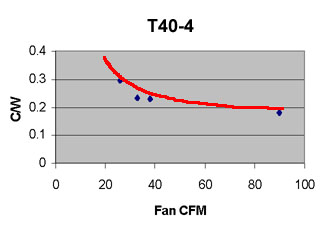 The incremental benefits of using a fan much beyond 33 cfm for this heatsink are marginal; anything over a Delta 38 has to balance noise vs performance gain. In any event, this heatsink’s best possible performance is a C/W of 0.17. Using a Papst 33 cfm gets you 74% of the way there; getting substantially beyond 80% is not worth the effort.