Fractal Designs has just announced the launch of two new Meshify series cases, the Meshify 2 and the Meshify 2 XL. Adding increased flexibility, both models feature an adaptable dual-layer interior and increased airflow options. The Meshify 2 is a Mid-tower design capable of housing an EATX motherboard while the XL is a full-size tower capable of fitting up to and including SSI-EEB server-class motherboards. The Meshify 2 has a total of five different models with prices starting at $129.00. The XL has two options, both priced at $179.99. Here is Fractal Design’s official press release. 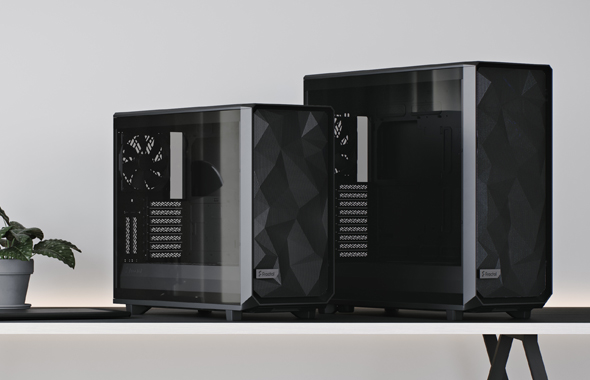 Enhanced flexibility meets distinctive design.
Leading PC component today announced the eagerly awaited Meshify 2. Not only does the Meshify 2 range stay true to its legacy in terms of uncompromising design – it also comes with welcome additions like a movable wall for enhanced flexibility, a fully removable top panel and a front nylon filter that can be removed for increased airflow. Alongside the mid-tower model, the XL version is also launching today; accommodating motherboards all the way up to and including SSI-EEB, holding several radiators and up to 23 storage devices without issue.

Like black diamond facets, the angular asymmetry of the Meshify line has carved a space uniquely its own. And with a sturdy construction that is both stealthy and smooth, the Meshify 2 Series is sure to impress with its unique mix of style and substance. It is a textbook example of what you should expect from a modern case when it comes to modularity, flexibility and ease of use. 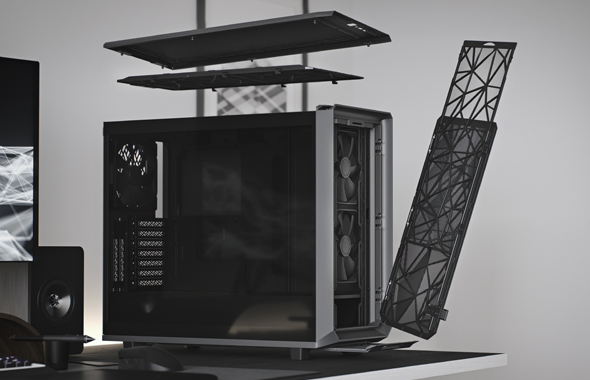 Determined to add Scandinavian design values and longevity to the computer case market, we founded Fractal Design in 2007. With offices in Sweden, Taiwan and the US (as well as being sold in 45 countries), we are today considered one of the world’s premier brands when it comes to designing and manufacturing cases, fans, power supplies and accessories for discerning enthusiasts with high standards. See for yourself at fractal-design.com

About John Nester 351 Articles
John started writing and reviewing PC components for Overclockers.com in 2015, but his passion for PCs dates all the way back to the early 1980s. His first personal computer was a Commodore 64 with a cassette drive. As a dedicated member of the news team, he focuses his articles on new product releases and software updates. He reviews a wide variety of PC components including chassis, storage drives, keyboards, and more. John works in technology as a C.A.D. designer for a major automotive manufacturer. His other passions in life include motorcycles, hunting, guns, and football.

Since Fractal Design has jumped into the component market, they have done a great job of bringing us affordable cases that look great. Today we look at a refinement of their venerable Define XL, the Define XL R2. Did they make the right changes to make an already solid case a top contender? Let’s find out together, shall we?

Today, we have an opportunity to look at a new full tower case from Fractal Design named the ARC XL. In the past, we have reviewed other smaller cases from them such as the ARC Midi and Mini, the Define R3 mid-tower, and the Full Tower XL R2. However, the ARC XL is a different design then the “Approved” XL R2, but looks to build upon some of its merits. Let’s see what this case has to offer a builder, shall we?

Fractal Design has updated their Define series of cases to the Define R5. From looking at the list of features, this case seems to put together a number of desirable design elements all in one case. Is it a good case? Is it a case for you? Let’s see.

This is perfect timing. I am planning a complete rebuild of my rig and was really struggling to find a case that "felt" right. This one hits all the right notes...except for price. I settled on a Meshify C (not as many bells and whistles, but still a proper good case). I wouldnt have even seen it without this article though.