Continuing our FSB tests on 133A motherboards, we purchased an ASUS A7V133 to test out. I earlier reviewed ABIT vs Iwill and thought a head-to-head test with the popular ASUS board would be interesting.

Since the 133A chipset is plug compatible to the 133, many of the boards that feature the 133A are basically the same 133 boards with a 133A chipset. ASUS’s 133A entry, the A7V133, is basically the A7V with a new chipset. I eyeballed each board and found one major difference: ASUS has now added active cooling to the Northbridge chip: 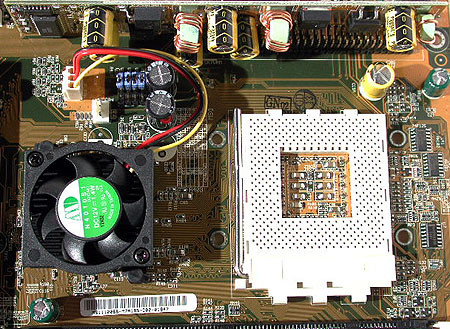 I didn’t see any other major physical change (some small changes in the lower right hand side; also no audio). I do like the power transistor riser board as it serves to keep these hot chips off the motherboard proper for better CPU cooling. Also note that this opens up the CPU socket clearance quite a bit, especially compared to the cramped ABIT KT7A.

I did have problems with this board’s BIOS: For whatever reason, I just could not get the board to 133 MHz and 1.85 volts through BIOS. I tried a number of different approaches and none worked. Finally, I resorted to the A7V “fix”:

With this setup, I could set FSBs and multipliers in BIOS, no problem. Well, I did have one problem: For whatever reason, setting FSB to 155 MHz would result in 150 MHz; 154 and 156 would read correctly. Another BIOS bug? Looks like the marketing guys at ASUS wanted the board out quickly.

If you are looking for basic features etc, just read any A7V review or ASUS’s website and you’ll get the idea.

The major difference, of course, is the KT133A chipset and its ability to run higher FSBs – the KT133 was crippled and rarely did I see anyone running a KT133 much over 110 FSB reliably. With 133 MHz a spec speed, FSBs greater than 133 MHz become really interesting. So the focus of this article is not a review per se but a test, a test to evaluate what might you reliably expect from high FSB performance between the ASUS A7V133 and the Iwill KK266.

To test FSB performance, I relied on a test suite marketed by UXD. More details on this test suite are given at the end of this article.

Something interesting here – there is a significant performance difference between the two with the Iwill clearly jumping ahead. This is the same picture I saw against the ABIT KT7A – nice consistency! The Iwill was designed as a new board while the ASUS and ABIT boards are “retreads” – this might have something to do with this performance gap.

Next, I used the RAM Stress Test to see how far I could get with FSBs. I started this series at 7×150 and worked up, varying FSBs with the following results:

Iwill can hit higher FSBs than ASUS, with the usual caveat about single sample tests. I ran full board stress tests at 133 MHz on both boards without a hiccup, so don’t read these results as indicative of performance problems at that speed. However, there is no doubt that the Iwill KK266 can deliver reliably higher FSBs. Note, however, that at these speeds the PCI bus is starting to run at some hefty speeds; typically, sensitive peripherals like NICs and some hard drives really flake out.

For all practical purposes, FSBs beyond 160 MHz are marketing hype. In addition, it is quite likely that SDRAM at speeds much in excess of 133 MHz must run at lower settings, which slows down performance a bit.

As an example of CAS2 vs CAS3 differences:

Overall about a 2-3% performance difference; for almost all applications, not really noticeable. Even though CAS3 does exact a performance hit, it is outweighed by the higher memory bandwidth gains. For those of you curious about what to expect at 6.5×160 MHZ:

There ARE real performance advantages at higher FSBs.

The Iwill KK266 clearly outperforms the ASUS A7V133, even though their memory bandwidth scores are not that far apart. Considering these tests, I think the Iwill KK266 is setting the KT133A performance standard.

ASUS’s A7V133 is an acceptable board up to about 155 FSB, depending on RAM quality; However, the A7V133 exhibits some of the same quirks and BIOS bugs that the A7V did, which speaks to how closely the A7V133 shares its lineage to the A7V; I would have thought that ASUS had worked out these bugs by now. I assume that ASUS will work these bugs out with BIOS revisions, but if you must have an ASUS board, I would hold off until they do.

I used a diagnostic board called “PHD PCI” that stress tests all components on a motherboard; you can see more about it HERE. The company that makes it, Ultra-X, markets a series of hardware and software products for diagnosing PCs, and I also used Quick Tech Pro, a software test suite. What’s neat is I can run it in “Burn-in” mode which repeatedly tests each component on the board. Briefly, I tested the following:

The test suite covers much more, but for this test I concentrated on motherboard components and how it handles RAM at high bus speeds. For the RAM test, I used a product called RAM Stress Test. When you run it, it puts the RAM through a series of test algorithms including

Now I can’t tell you what all that exactly does, but I can tell you that the RAM chips get fairly warm while all this is going on. I can also tell you that if the RAM fails this test, getting into Windows and running any intensive app is a problem. Where this really came in handy is for testing both boards at high FSBs to see what they can reliably handle.

A User and His IWill

Here’s a letter I just got, the author raises some good points: First of all, I would like to thank you for your excellent review of the Iwill KK266. Due in large part to your review, I purchased an Iwill

Review and Overclocking results of the Gigabyte GA-P55-UD3R Motherboard

Gigabyte Japan asked me to look at their entry level board, the GA-P55-UD3R.