My first experience with G.Skill RAM was as a moderator of the (dearly departed) abit forums. They. Just. Work. We’d recommend them all the time because once you set the BIOS properly, you were done.

Back then there weren’t a lot of high performance G.Skill options. This was before the Trident or Ripjaws series and even the Pi series was brand new. Their choices were basically red, blue, lighter blue & black. Since that time, G.Skill has come a long way and has established themselves as one of the premiere manufacturers of low- to high-end RAM.

Since this kit comes with a fan, it arrives in a larger cardboard box instead of the usual thin, shiny G.Skill box. It’s understated, especially for what’s inside, but a box is a box and is far from any great concern. What it does is protect the memory and its accompanying fan well.

The kit’s specs from G.Skill’s web site are:

The first thing that jumps out is the Qualified Motherboards List. This puts these even further into a niche market than the CPU limitation. They might work on some boards that aren’t listed but it’s not guaranteed. For instance, the board used in this review is an EVGA P55 FTW (not the 200 model) running BIOS A59.

Timings aren’t as tight as sticks at slower speeds, but sometimes you must sacrifice a little in timings to gain a little in MHz, as anyone that’s ever overclocked memory well knows.  Let’s see how they look!

Pulling the memory out, we are met with a rather nice looking fan and some stunning yet ominous looking black and dark blue memory. The heat spreaders are tall, but not insanely so (Kingston HyperX beats these in height by just under 1/4″). They are adorned with G.Skill’s symbol of choice for their top of the line memory – Pi (π).

They certainly look nice installed too. The fan is extremely quiet and is inaudible next to the noise of all the other fans in this system turned down to their normal levels.

Testing and Performance at Rated Speed

This is the first in what we hope will be a series of memory reviews. This particular kit is rated at DDR3-2400 with timings of 9-11-9-28, so we’re definitely starting off with a bang!

Before performance testing, let’s look at stability. Ultra-X has generously supplied their RAM stress tester, the R.S.T. Pro 3 PCI Express. There are only a couple review sites that have one of these and we are proud to be one of them. It’s not your standard Memtest++ bootable CD. This is a standalone, bootable piece of hardware that plugs into a PCIe x1 slot and, man, does it ever beat on some RAM. By the time it was done, these sticks were hot, even with the case side panel off and the supplied fan blowing air on them.

Several manufacturers use this to test their memory before it goes out the door to reduce RMAs. If it passes this test, it is stable and then some. Manufacturers generally run the full memory test for three passes. We’re overclockers though and tend to abuse sticks a little more than other people, so for our purposes, doubling the manufacturer’s requirement sounds good.

These sticks were set to their rated speed using the 12x multiplier at 200BCLK with timings 9-11-9-28. vDIMM was 1.65V as specified and VTT was set at 1.4V. They made it through all six passes with zero errors. Well done G.Skill! 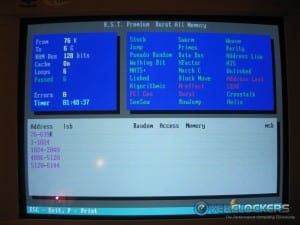 Now let’s see how they perform, shall we? To establish a baseline, the sticks already in this system, a 4GB set of G.Skill Trident DDR3-2000 with timings 9-9-9-24, were run through a battery of benches. Every benchmark was run three times and the best score is reflected in the results below.

Obvious anomalies, if they existed, were tossed and the bench was run again. The only tests that happened on were the everest read/write/copy tests, when the result glitched to about 10,000MB/s over every other run. This only happened once, but should be mentioned in the interest of full disclosure.

All tests were run with the CPU at 4.0GHz (200BCLK x 20) and RAM set to its rated speed and timings. The rest of the system in question consists of:

To start, we’ll have a look at how memory affects 3D performance by running every 3DMark from 01 to Vantage.

I assumed the effect would be relatively small and it turns out that assumption was correct. So small, in fact, that the percentage change ranges from -1.78% to +0.07%. Basically a rounding error at best. The largest discrepancies came in 3DMark06 (-1.35%) and 3DMark Vantage (-1.78%), in which the higher frequency but loosened timings actually lost out a little bit.

This one was a bit more of a surprise until thinking about it. The image rendered isn’t that large in size, so this one’s less of a memory test than a CPU test.

There we go, finally a substantive difference and one that goes in favor of MHz over timings too. 3.66% doesn’t sound like much, but if you were compressing something that’s 10GB, you’d save 1 minute, 42 seconds (but it would still take over 38 minutes at 4,504KB/s).

Not a bad reduction really, considering it was the same CPU speed. If the timings were, say, 9-9-9, the difference would have been a bit more noticeable, especially in SuperPi 32M. That said, a six second difference in 32M scores is easily the difference between first & third. Not a bad gain at all for just swapping RAM out!

WPrime was a little bit of a surprise. There was hardly any difference at all, with the greatest coming in 32M. Looks like WPrime prefers tighter timings to raw MHz, but even then you’re talking just over a hundredth of a second.

In the everest suite you can see a very significant increase in write speed with a healthy increase in copy speed and strong reduction in latency. Write wasn’t quite as strong as the rest of the results, but no ground was lost anywhere.

The results above were obtained from running the individual tests three times & taking the best, but some people like the Everest quick bench, so here they are side by side.

This kit was an absolute blast to overclock. No insane voltages were used (max 1.45V VTT & 1.72V vDIMM) and unfortunately there wasn’t enough time to tweak every single timing / MHz out of them. This is the result of only a few nights’ overclocking. You can spend countless hours testing different timing / speed combinations. These are just rough results I was able to get in the meager hours I had to play with them before writing this review.

I focused mainly on the old favorites SuperPi & WPrime for overclocking since they were quick & showed the most promise. First we’ll see how tight the timings can be cranked down when reduced to DDR3-2000 speeds and running 1.68V with CPU speed maintained at 4.0GHz.

Wow. DDR3-2000 at 6-9-8-24 with barely above default vDIMM! That’s crazy talk. It’s not just bootable either…this was stable through SuperPi 32M, Wprime both 32M and 1024M and even a MaxxMem thrown in there. (Maxxmem will be used in all memory reviews from now on, it just didn’t make the default results above for this kit.) Note I did have to manually set the strap to 1600MHz to begin cranking the timings down. They don’t seem to like tighter straps when you’re tightening timings.

Now let’s see just how far we can push the MHz! Stability was not a concern here. The goal was to see how high they could run SuperPi 1M and validate. Timings were default 9-11-9-28, vDIMM was set at 1.72V and VTT was 1.4V for this run. It wouldn’t quite boot at this speed, but we could use EVGA’s eLEET and crank the BCLK up once booted.

Amazing is the only way to describe it, simply amazing. DDR3-2626 without loosening up timings or running crazy voltages! Here’s the CPUz validation.

This is stronger than I ever expected. A full 113MHz overclock, without high voltages and with relatively tight timings. Simply incredible.

So what does this mean for overclockers really? What if you can’t reach that kind of bclk with your system? It means you have memory that will go as far as you need it go to. No longer do you have to be held back by memory that just won’t reach where you need it to. No longer do you have to reduce your memory multiplier in BIOS unless you’re running crazy BCLK on sub-zero. Here’s what it meant to this setup:

It meant this CPU could be pushed as far as it would go (with a self-imposed limit of 1.5Vcore set in BIOS) and not have to worry about memory interfering. (The time would be even better if I was in XP, but that’s a long story.) It’s truly a great feeling to have that monkey off your back when reaching for the bleeding edge of stability!

Let’s face it. No one is going to run to Newegg and spend $229.99 on a 4GB set of memory to set it and forget it. These are tailor made for overclocking…and overclock they do! It also would seem G.Skill is the first to get a set of DDR3-2400 for sale at the Egg. Considering the number of memory manufacturers that sell there, that’s a pretty good feat in and of itself. Here’s the bottom line:

If you are running on a P55 platform and want to get some memory that will never hold you back, this kit is for you. Run, don’t walk, on over to Newegg and buy yourself a pair. You will most definitely not be disappointed. I’m happy to say that this kit is very emphatically Overclockers Approved!

Enermax has been towards the top of the power supply manufacturer heap for quite a while, they were one of the first brands to push into the high power (for the time) and high efficiency (for the time) arena that we all take for granted now. Today’s unit is much higher wattage and much higher efficiency than those past units of course, but you can smell the history. Or possibly the solder fumes. In any case, let’s see how the MAXREVO performs!

Late last month we announced the launch of AMD’s new memory lines. Today we have a 2x4GB kit from their “Entertainment Edition” series to look over.

The G.Skills are so tall I had to mount my Venomous X off-center of the CPU.