SUMMARY: A real good mid-tower case to use as is or to customize to your overclocking needs. Cooling is given top priority and performance shows this to be one of its strong suits. Well made, flexible design, easy access and not bad to look at – Worth serious consideration. 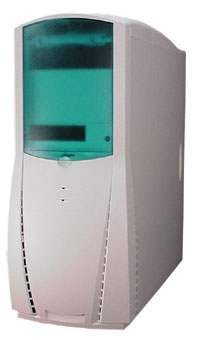 GenX Tech was kind enough to send us their GXT912 ATX Server Case to evaluate. I have to say off the bat that this is one fine case that has many of the features I value for overclocking. Most notably is the attention to cooling – the case ships with two fans: one 120 mm front fan and a 92mm rear fan. Each fan has a special mount, the 92 mm with a CPU shroud and the 120mm in an easy-removal metal cage. Each fan can be easily replaced and the intake fan can be downsized to a 92 mm if desired. 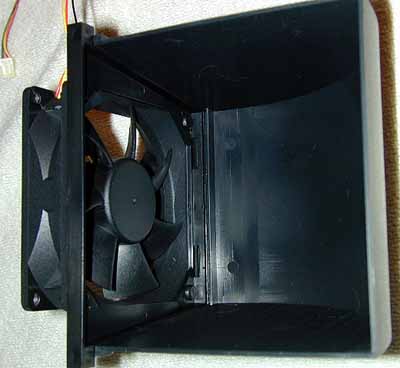 In addition, the GXT features a removable hard drive cage, 5.25″ slots with or without rail mounting, a 300 watt Sparkle power supply, easily removable no-screws front and side panels. There is room for 3 5.25″ drives and three 3.25″ hard drives, maybe four with some jujitsu. The motherboard tray is not removable but large enough for any board made. A detail I like are the through-holes in the motherboard tray for mounting 5.25″ drives – slide off the back cover and they are easily accessible. 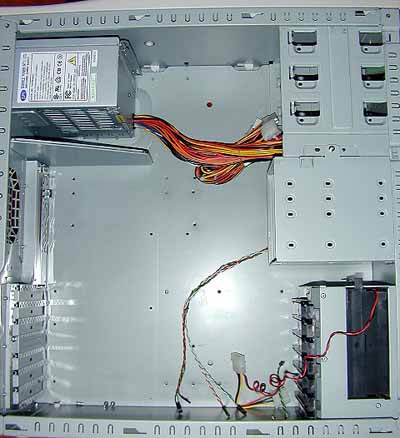 Finally, this is no flimsy tin-can case; it is solid and will not flex if you stress it. Weighing about 30 pounds (13.5 kilos), it has quite a solid feeling. There are no sharp edges that I found (and I can usually find them) to give you “case-cuts”. It comes with all the necessary hardware.

The front fan is easily removable from its metal cage which is designed to house 120×25, 120×38 or 92×25 fan sizes. My personal preference is for 120mm fans – lots of air at reasonable noise levels (depending on the fan specs, of course). The fan holder can accommodate a 102 or 92 mm fan; if you use the 120 mm fan, there are plastic tabs on the fan’s mount which should be removed. All it takes is an Exacto knife and about 5 minutes to remove these tabs. 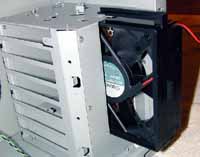 The rear fan is a 92 mm T&T unit for which I have no specs, but it is not underpowered by any means – I would guesstimate airflow at about 35-40 cfm – very respectable. This fan includes a shroud which hovers over the CPU, thereby exhausting warm/hot CPU waste air directly out of the case rear (pix below). 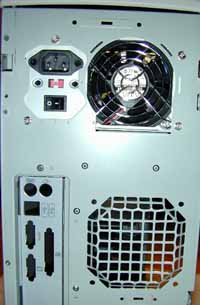 However, as the picture below shows, for a dual board (this is a BP6) the shroud will not cover both sockets – you will have to do some cutting of the shroud if you are using a large heatsink like the Alpha PFH/PAL 6035 or the Global Win FDP32. If you are running a hot video card, dumping CPU air this way will keep the case temp lower and place less stress on other cards and the power supply. 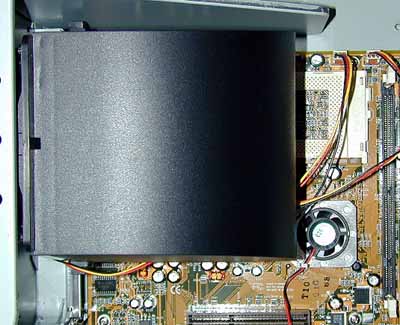 The other features I particularly like are the removable sides, removable front, quick-mount hard drive cage and hard drive cooling.

The sides remove with two slide switches on the rear panels – slide to unlock, pull the side to the rear and the panel is off. I pull sides off the case at least once a day for whatever reasons and a lot more when I’m testing stuff, so this is a must-have for me. Most important the sides come off without taking anything else off – some cases are built such that to remove the side, you have to take off the top or front; not so with the GXT.

The front has plastic tabs attaching it to the case front; simply flex the tab, pull and the front is off. Taking the front off does require the sides to be off also, but considering that I rarely take the front off, this is no problem. What’s also nice is that there are no entangling wires attached to the front so it comes off completely without disturbing anything inside the case. The front also has a sliding cover to hide external drives when not in use – a nice touch.

The hard drive cage sports a spring-loaded lever that makes the cage a snap to remove and replace. There are locking screws on both sides that can lock the cage in place, but unless you are moving the case around, I did not see a need to use the screws. What is most impressive with this case is the ability to mount an 80 or 92 mm fan directly in front of the hard drives to act as a cooling fan. Now considering that some drives develop a fair amount of heat and the market for hard drive coolers, this detail is a real plus; rather than buying a cooler for each drive, you can mount one fan to take care of all drives – a considerable cost saving.

If you chose to mount a hard drive fan, then you have 2 intake fans delivering something like 130 cfm and two rear fans – the power supply and shroud fan. This is enough air flow to handle aggressive peltier cooling requirements, and certainly enough for any conventional air cooled setup. There are other cases that allow you to mount two 80 mm intake fans – frankly these are not serious solutions – bigger fans can move lots more air with less noise.

OK – I’m guilty – I don’t like noisy systems no matter how efficient they are. I spend a lot of time each day on my systems and noise just disturbs my concentration. This is why I love water cooling – incredibly efficient cooling with the least amount of noise. Now there are ways to control noisy fans; don’t block fan fronts, use rubber mounts and use rheostats to vary fan speeds. What I’m going to do is alter this case to demonstrate how to improve air-flow while reducing noise at the same time. This involves some serious cutting and I will describe in detail how this is done, so consider this a “review in progress”.

Now I can buy a case for as little as $28 with a 235 watt power supply – this one sells for $145 (reduced from $185) with a 300 watt power supply so in comparison it’s expensive. Or is it? I love a bargain and I have paid dearly for some of them after I live with what I purchased. A computer case is something you will have for a long time and I firmly believe in getting the best (within reason). Considering that I can cool efficiently for whatever I use in this case (water cooling, peltiers, etc.), I can cool my hard drives with one large fan, I can get in and out easily and I can pull out my hard drives with the flick of a lever, then $145 doesn’t look expensive at all.

Six Million For 2004 . . . XbitLabs reports that AMD will make slightly less than six million desktop Hammers in 2004. All of 2004. Just to put that number in perspective, total AMD CPU production is a bit over

Motherboard makers are supposed to get the first samples of AMD’s 45nm processors in August or September. This means we won’t see production models in action until the later part of the fourth quarter. While AMD has never said anything