Today, we’re going to give a lesson on AMDese. As you’ll see, it’s a tough language to master, took me years and years of daily practice to get it.

What we’re going to do is take a recent Hector Ruiz interview and translate it into English.

Q At the same time, AMD has struggled with Barcelona. What has been the problem?

A Frankly speaking, the issue with Barcelona has been that it is later than we wanted. We had hoped Barcelona would have been earlier in the year. We are suffering from that.

English Translation: We have fixed the problem.

Translation Explanation: AMD never ever acknowledges a problem, no matter how obvious, until they have a fix for it. Then they’ll acknowledge it.

Yes, he did go on to say that the problem was fixed, but even if he hadn’t, you can rest assured that B2 will be good to go.

Q Will AMD’s new Barcelona chip change the competitive landscape when it is launched Sept. 10?

A I expect us to regain position in the server market because Barcelona is a very strong product. It won’t have the huge impact Opteron had. If you remember at the time Intel had no new product (to compete against it). So it will be more challenging. What we’re anticipating is that Intel and AMD are going to be very competitive in every space going forward. We’ve become big and strong enough and credible enough that we are going to flip back and forth in leadership.

Translation Explanation: To properly translate AMDese, it often helps to paraphrase the statement to be translated. Do that here and you get “Barcelona is great, but don’t expect much from it. We don’t; we expect to regain some of our recent losses, and that’s about it. After all, unlike last time, we have to compete against new stuff from Intel.”

This is a far cry from the “Fe-Fi-Fo-Fum” stuff we were hearing a while back and which a lot of financial types still believe. This sounds more like “catchup” than “conquer,” “OK” rather than “Killer.”

In case you think my translation is faulty, maybe you need to get a second opinion on these comments:

“What disturbs me the most about the Q&A with Hector over at Mercury News was his tone!

“He was down-playing the impact Barcelona will have in the server market, noting that Intel has competitive products especially with Penryn on 45nm due later this year.

“With the MPU market actually very strong this year and expected to be stronger in 2008, AMD has to gain market share but also make money during a period of robustness. The pressures seem greater than ever on the company to perform and compete properly.”

Not good, especially when a lot of financial folks still think Barcelona is going to blow Intel away and bring AMD to break-even by the end of the year.

You see, the whole point behind AMDese is to sound like you’re saying something, but not quite saying it. AMD never quite said Barcelona was going to blow Intel away, nor did they quite say that they were going to break-even by the end of the year. But many think they said it, and when these things don’t happen, they’re going to feel that they’ve been lied to, and then . . . .

Q You joined AMD in January 2000 after 22 years with Motorola. Do you have any plans for retirement?

A I’m 61, and I haven’t thought about retirement yet. I’m sure the time will come. At this point I feel young. I can still ride a bicycle 200 miles a week. I’m not an egomaniac. The time will come when we need to transfer power to a new generation of leaders. It’s not my intent to be here forever. At this point, however, I am not planning any imminent retirement.

Translation Explanation: People who speak AMDese often make multiple statements to convey one impression, then sneak the opposite in with an oddly-worded phrase.

Here, we have Hector making a number of statements to give the impression that he isn’t going anywhere anytime soon, then he obliquely leaves the door open for the exact opposite.

If you’re feeling secure in your job, plan to be around a few more years, and the questioner isn’t asking you anything like “Are you going to get fired next week?” you don’t use the term “imminent retirement.” You just don’t unless you’re more than a little afraid you’re going to get involuntarily retired sooner rather than later.

If you work at a job and you’re not thinking about leaving or worried about being terminated, if somebody asks you, “How long are you going to stay at this job?” would you answer, “I’m not getting fired next week?” No, you would only say something like that if you were worried about getting canned shortly.

Do I think that means Hector’s leaving really soon, maybe soon after Henri? No, at this point he’s in trouble, not dead meat, but even in English, a comment like that is called a Freudian slip. Somebody’s getting heat, and he’s pretty worried about it.

(The following is mostly for entertainment purposes, but maybe it also gives a glimpse of how Green really works.)

Actually, this Ruiz interview proved quite helpful in definitively answering a question. Someone sent me an email entitled, “AMD is a marketing juggernaut (sarcasm inferred)” and enclosed this picture . . . 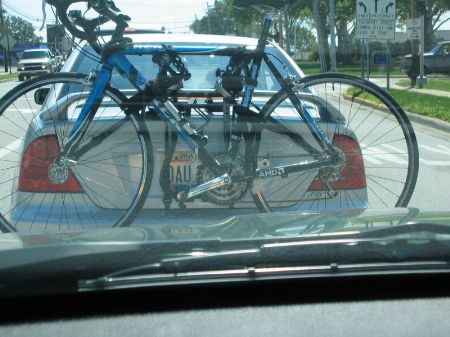 . . . and basically asked, “Why is AMD spending scarce marketing money on cyclists?” I knew AMD had spent a good deal of money aimed at cycling and cyclists, but I couldn’t tell him why. Now I can.

Maybe Hector thinks cyclists are a critical market segment, or at least a moving billboard. More likely, AMD PR saw this as a way to butter up the boss by letting him see his marketing dollars at work, even if he was the only one seeing it.

Makes me wonder, though. I know AMD is a major corporate sponsor of the New York City professional hockey team, and spends much money on Formula One. Now that I have the key to AMD marketing, I want to know: Which top guy is a Rangers fan, and which one likes Ferraris?

SSDs, the newest kid on the block, is trying to dethrone the big old HDD that’s been around for decades.

Reading About The Flings of Your Future Wife

The link we posted yesterday about the KT7 and its RMA rates brings up issues we’ve been long troubled by at Overclockers.com. Websites get equipment, often hand-selected equipment by the manufacturer, on which to do a review. Is that equipment