I’m not going to bore you with details about how to make your own water cooling system. Everyone involved in overclocking and having some mechanical skills can do it by himself. This article is just to show what I did, some of my thoughts and ideas, and the results I got.

Since I bought my Duron 700, I have not seen less than 37 C on my Via hardware monitor. I started with a small standard heatsink and the CPU would work only at the default frequency. Of course I wanted much more from it so I started to look for a better cooling solution.

After hard and time consuming modifications of aluminum heatsinks, I finished with a big, heavy cube with a lot of fins. It was not so bad after all (40-45 C on 1 GHz, Abit KT7 Raid, 1.775V, with an additional fan on the top of the PC pushing air straight to the CPU socket), but I couldn’t find a safe solution for mounting. You can guess how this has ended after a lot of experiments – burned processor.

A colleague of mine (same PC maniac) and I found a nice store for copper products. There was all we needed – one piece of copper 10x10x1 cm for only $5 and many different types of tubes. I had one of those fountain pumps ($10) and an old heating core radiator for cars. We lost a lot of time and nerves milling and drilling the holes in the water blocks because of the lousy tools we were using, but after all, we got what we needed. Some said I should go to a machine house, but you know how nice is to see something made by your own hands. Anyway we built 4 blocks (2 for each of us) 5x5x1 cm. 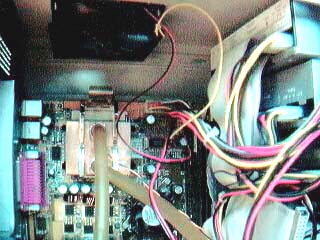 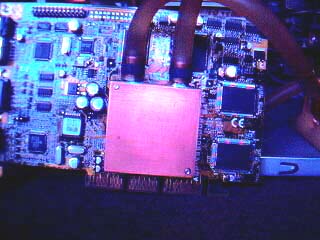 The reasons for such thin block was that we wanted to use the original clips to secure it to the CPU and of because of my bad previous experience. I can speak a lot about sizes of the holes and tubes. We did a lot of calculations for how many and what sizes should the holes be in the block. Finally, we decided to drill four 4.5mm holes Y-axis, two 6.5mm – X-axis and two 8mm – Z-axis where the hoses are connected.

The video water block is a bit different, but the principle is the same. Our main goal was to keep the cross-cut surface the same or bigger than of the tubing, so there’s not much pressure (pump is getting noisier). I connected all things together and began to test.

Unfortunately, when I tried to stop the pump the temperature went sky high very fast and I already knew what is going to happen in case of pump failure. There was an easy solution for this problem, though: Instead of trying to sense the water flow or pump current, I made the most secure thing – just watching the block temperature with a sensor. A small and not complicated electronic board with a chip and relay switches the main power off in case the temperature rises more than a preadjusted value.

My thoughts were that anyone can live with one Scandisk or even OS reinstallation instead of a burned, non-warranteed CPU. Combined with Motherboard monitor, things are even better because this nice software can shut down your PC in case of parameter insufficiency. I don’t rely on it too much though – we all know it won’t work in case of a software hang or if an opened application wants to save your work (famous question “yes”, “no” or “cancel”).

The only problem presented is a water leak. I don’t have anything in mind on how to handle this except filling the PC with all kinds of sensors and very complicated electronics. Distilled water should make things better, since its current resistance is very high. Corrosion can be solved with periodic cleaning of the system.

Some words about the radiator, money and fans: I bought a copper heater core from an old car spare parts warehouse for $10. After thorough cleaning and few modifications, it looks like this: 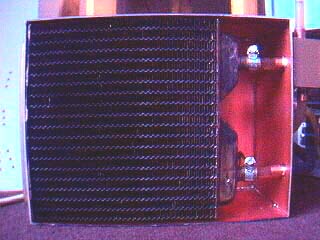 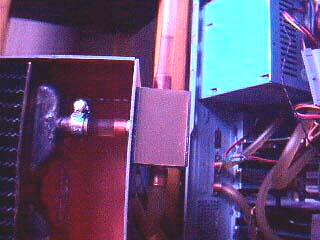 It stays at about 2C above ambient with a big 15 cm, 46v fan (found it for free) connected to 10v. At the upper right you can see air remover box which I made, because of the closed loop system and for filling as well.

And the fan at the rear itself:

So it’s about $30-35 for me, which is less than a hedgehog or FOP32 and with about 10-12 C better results. I’m not sure you can find all this for the same money, but you got the figures – it’s not so expensive.

Fans: I have now 4 fans – power fan, Via chipset fan, radiator fan and the same PC top fan sucking air from case (for some reason my case temp is higher without it – 30C). Before: 5 fans – power, Via, CPU, Video, Case fan pushing air into PC straight to CPU resulting in the same 30 C case temp. So I can save now a case fan, but it’s not very noisy anyway.

Unfortunately, I can’t say noise is much lower now but for sure it’s coming more from HDs instead. At least I can listen much better to CDs now than before. 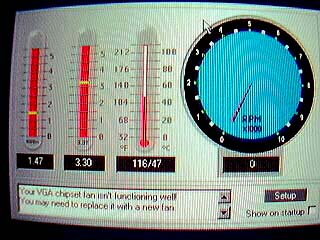 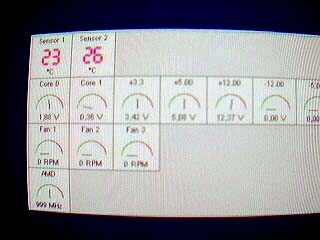 The pump is pretty standard – about 600 liters/hour, immersible and very quiet. I decided to put in a sealed (in fact soldered) box and, if it fails, I’m not sure I’ll be able to take it out for repair. I still don’t know which way is better for the water to travel through: First to the CPU and video, then radiator (up – down) to pump or the opposite – radiator (down-up), CPU, video to pump.

I haven’t seen any significant differences and on my opinion there shouldn’t be any. I think all these stories about slow flow are also wide of the truth, because if you cool the CPU faster, water will also be cooler at the entrance of the radiator. The same is with the slow flow – water will get warmer to the radiator, but will cool better at the output. In fact I have tried it by squeezing one of the tubing and can assure you there was no difference at all. 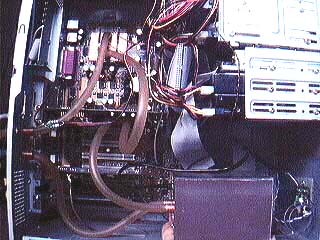 And finally, a picture of the whole system; my wish was to put everything inside the case, but as you see it’s too small to fit. I can’t afford another $50-60 for bigger case just because of that. Sometime in the future, maybe.

Deer Caught In The Headlights

From here: The United States Football League was a short-lived professional American football league that played three seasons between 1983 and 1985. . . . . . . [T]he USFL filed an antitrust lawsuit against the older league, claiming it

That’s the title of one of our forum threads, and in this world of hype, this is the one time a comment like that is an understatement. We’ve said that the 1.8A C1 would likely be the best overclocking CPU