Have you ever wondered how much it costs to run your PC each month? Until recently, I didn’t. In the past, I had speculated that running my PC 24/7 may cost about 10 dollars per month. However, with increasing fuel/electricity prices, it may surprise you.

Using simple readily available equipment that some of you may already own, I was able to reasonably measure the actual power consumption during run-time. We used a simple P3 Kill A Watt electricity load meter and monitor from Newegg. While not the most accurate, for this purpose it will give us a good idea of the power needed to run your PC.

Since the Kill A Watt is a single-plug device, we’ll list only the PC itself. The Kill A Watt meter displays the amount of power used at the wall. This reporting method includes any efficiencies lost due to the power supply’s 80 Plus rating.

For this testing, we used two different Intel configurations. A high-end set up with the (current as of the time of this writing) flagship i9-10900K and RTX 2080 Super, and a more economical configuration using an i3-10100 and an AMD RX 5500 XT video card. Since every system is different as far as the monitor goes, our goal here is to give you an idea of what just the PC uses. 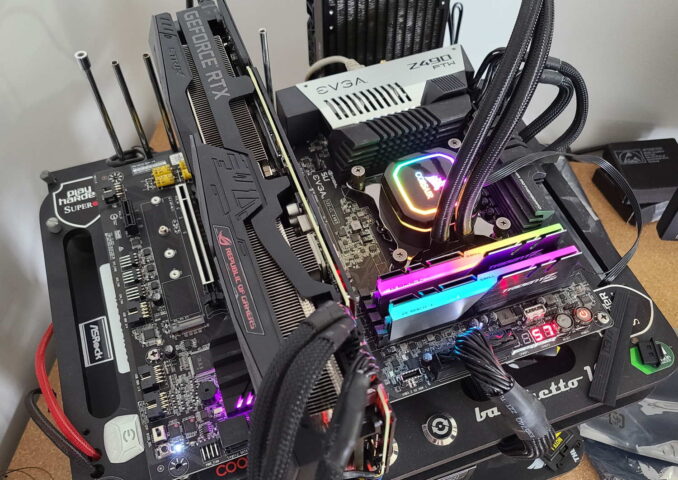 Below is a list of peak values we gathered using real-world testing.

If the PC is running 24/7, like you are running Folding @ Home projects or computational workloads,  then the number of runtime hours, assuming 30 day months, can be computed as:

The generic equation is this (where WWW = wattage):

We’ll assume an average of 13.3 cents per KW/h and 24/7 runtime for the example equation below. We’ve broken that down to eight and four hours per day in the tables below.

So there you have it. Our flagship Intel processor system with an Nvidia RTX 2080 Super graphics card used up to 541W in our worst-case scenario and cost almost $52 per month. If you’re gaming 24/7 for 30 days (somehow), that middling load will run you around $38. If you work just relies on the CPU running full tilt, you’re looking at around $27. When we compare that to the entry-level system, The worst case is around $22 while gaming is ~$19. That’s a pretty big difference between the systems.

Finally, if you only use your PC for about four hours a day, you may be hard-pressed to see it on your electric bill among everything else. Even in your worst-case scenario, the entry-level PC costs a whopping $4.33 to run for 4 hours a day all month when gaming. The high-end system, $6.26.

Sadly, we didn’t have a Ryzen based CPU on hand, but we know that, generally, these use less power than the same core/thread count Intel processors.

PS: Here’s a link to a PSU Calculator which can estimate your power needs based on what peripherals are included – very handy! Don’t forget to hit “Calculate” when finished.

If you want to do the calculations based on your state’s price for electricity, you can find that at Choose Energy or on your recent power bill.

How much does it cost to run your PC with your hardware? Use the equation above and tell us all about it in the forums!

(Ed. note: This discontinued monitor has been floating around various places for a while. I haven’t mentioned it in the past because of the problems rather nicely described below. While it’s not available at least at the Costco website anymore,

I had a chance to do some detailed overclocking on 7 cB0 P3 650’s over the last 2 days. All the same S-Spec,plant, week and all very close in numbers. Its pretty surprising to see how much they varied. This

Power enough to run two motherboards at once – Joe

You guys may have seen this before, but we've gone back and updated this article with current hardware, energy prices, etc.
Take a look and let us know how much your system costs to run each month. Mine is about $12 per month.

Interesting but I think its better I never know how much my computers cost to run. :eek:

I'm guesstimating ~$5ish, maybe $6 for my desktop. I pay a bit more than the article - little over 16 cents per kwh. Currently my UPS is reporting it at 130w with one monitor (LG 27UK670) and the desktop at a mild load (twitch stream and web browsing). Added another 50w for the second monitor.

I don't run it 24/7. don't even put it to sleep - full shutdown at night and during the week I don't even turn it back on till I get home from work, so it probably puts in a standard 40 hour work week.

And after doing all that I remembered the CPU's been running at stock for the past month, lol. I'll try to swing back to update after I reset everything.

I want to run mine off solar. I can't wait to retire my desktop. I guarantee the smaller footprint and fewer em's will be felt in a good way.
I have no idea what the actual cost is but I only know it could be less.

The two variations I made from the article:

1. Substituted Furmark for 3DMark Firestrike Ultra
2. For the Game I used Half-Life:ALYX (VR)

You can really see the difference Furmark makes on the power draw.

It's sad but that is one my smaller bills...:rain:

Looks like I’m still not caring about power draw. I was aways the “60 fps in Crysis 3 minimum regardless of anything else” crowd tbh