This article will tell my experience with expanding spray foam including the dangers and advantages.

I was at first a little hesitant to use a peltier due to the possibilities of condensation; however I decided that it would definitely be the best way to cool my chip and the only way to get the highest speeds. My cooling set up is as follows: I have an Overclock-Watercool (very good) copper waterblock for a slot one pentium III chip and a 72w peltier, a custom copper coldplate, a huge radiator and turbo fan.

After playing around a bit with the waterblock/peltier set up without the chip, I noticed that in no time at all water would condense on the cold plate and then turn to ice. I decided that “injectafoam” or minimal expanding spray foam would be the best sealer. After putting the chip onto the insane cooling assembly, I put a nice bead of foam all around sealing the chip to the water block.

Well, after letting it dry for a few hours, I had this big expanded ring around the waterblock. Make sure if you use the foam that you put a piece of tape over the pins so that foam doesn’t get on them and so it will still fit into the slot1 after the foam expands. I was pretty satisfied with the result and proceeded to pop it into my computer.

After connecting all the hoses and wires it was ready to go. I use a 12v 10 amp power supply to power the peltier and fans so that it doesn’t draw off the computer’s power supply – 72 watts at 12 volts is a lot of current (6amps to be exact) which can heat up wires if you don’t use thick enough gauge. After firing up the computer, the chip was kickin’ it at a cool -10 C, which is pretty damn cold. 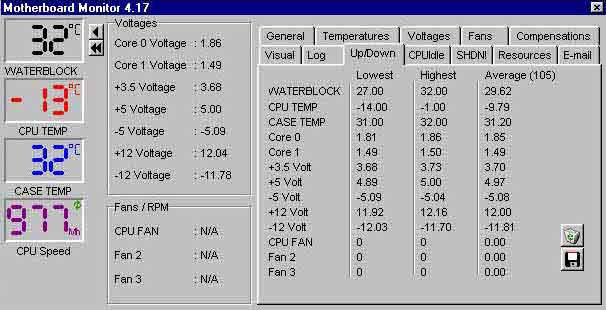 OK – it works time – to overclock.

After playing around a little more with the chip never heating past 6 C, I decided to go to sleep. I shut down the system and passed out. The next day I bought a crossover cable to connect my sister’s computer and mine via Ethernet and wanted to try it out. I turned on the water pump and peltier and waited about 30 seconds to let things get cool and hit the power button – didn’t boot. Hmm…maybe it’s not cold enough yet to boot at 980, so I let it sit a little longer.

Still didn’t boot. I then proceeded to boot at normal speed and went into the bios to check the temp. It was high, like over 100 F. I was like “What’s going on here this is not right, is my peltier dead? What’s the matter”. After trying a few more things, the temp was just staying hot – something was very wrong.

At first I thought it had to be the peltier and even if it wasn’t, I had to get the chip off the waterblock. This was way more difficult than I ever had planned. The foam is very, very strong and glues things together very well, including fingers =).

Well, after and hour or more of pulling and cutting and worrying that I might have ruined the chip, I got it off the waterblock. What do I see? Injectafoam really close to the chip and some on the chip. The foam had not fully dried the night before so the next day it did and with all its superpower it pushed the core of the chip slightly off the cold plate causing very poor heat transfer and making the chip get way too hot.

So if you are planning on using foam, try and not use that much and try and keep it towards the outside edges; also make sure the chip is tight against the cooling device. I also noticed that there was condensation on the backside of the chip – ahh, scary. After turning on the peltier and it creating some nice ice for me, I came to the conclusion it still worked.

I guess now I just put it back together and that’s what I did; however, I put a big piece of foam on the backside of the chip in-between the black casing and the PC board. This not only helps for condensation but helps to push on the center of the chip keeping it from being raised again – raised again because I re-injectafoamed the chip and let it dry.

I popped it back in and thought “If it still works, Intel has some durable chips”. Pushing the power button and praying, I heard a beep and up comes the screen and it boots – Hurray!!

OK – now is it overheating? Well I let it boot up and MBM 4 comes up and it’s a cool -10 degrees. This morning, it is still working so I imagine my little fixes worked.

Injectafoam is great stuff and definitely will keep out condensation (I didn’t see any after cutting it apart) but you must take care when you apply it since it has a lot of force when it expands, which it will. It is also very strong (like glue) and is somewhat permanent so try to do things right the first time or it will be 5 times the work to fix it. 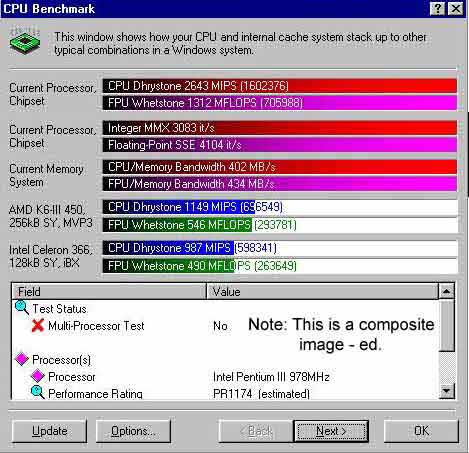 Now for more on how fast my computer is running. Here is my system:

If you want to email me about my system or have other questions, just drop me a line.

I recently received the Millennium Glaciator heatsink/fan and decided to test it out, head to head, against the Alpha PEP66T. This new HSF has been tested against several other units, but I have yet to see it put up against

SUMMARY: A How-To Cool the PLL (clock Generator) chip on the ASUS A7V – knocked temps down to 35 C. In my review of the ASUS A7V, I noticed that the KT133 and PLL chips run hot. ABIT includes active