Since P55 was introduced, it seems like I’ve seen nonstop complaints about options for running multiple graphics cards. This is because most P55 boards only have a total of 16x PCIe lanes available, to be divided between however many cards you happen to be running. So for an SLI or Crossfire setup, you’re only going to get 8x/8x speeds. The difference between 16x/16x and 16x/8x and 8x/8x (and so on) have been well documented. This bandwidth limit seems like just another obstacle for the P55 platform.

MSI has fixed this by adding an nf200 chip (already used in many X58 boards for the same purpose), providing either 16x/16x for dual card configurations, or 16x/8x/8x for triple card configurations. How effective is the addition of the nf200 chip? Well, if you do not want to run more than one GPU, it’s not. But for the rest of us that want the highest bench scores possible, or the best possible gaming performance we can get, I’d say this feature is invaluable. But before showing all of my benchmark and gaming performance figures, I’d like to discuss the Trinergy’s feature set a little more. 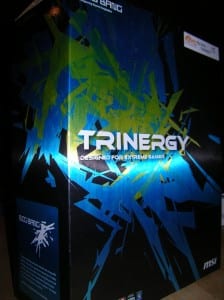 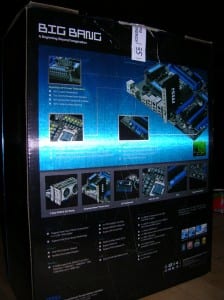 The huge pile of accessories barely fit in the box, and I doubt I could put it all back in again! 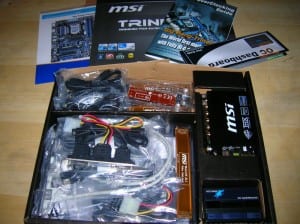 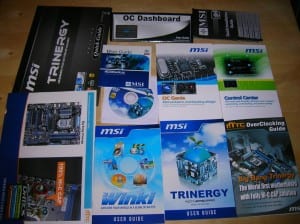 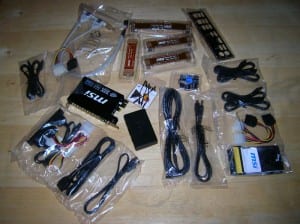 Since the last board I tested was MSI’s P55-GD80, I had a good idea of what to expect when the Trinergy arrived. On the surface, it looks almost like the P55-GD80’s twin with a few buttons moved around and redesigned heat sinks. The Easy Touch 2 buttons are one feature of the GD80 I loved and am very happy to see on the Trinergy. Turning on or resetting the system is as easy as brushing your finger over the button (or where a button used to be). It’s easy to accidentally hit these if you’re not careful, but once you remember they’re there, it becomes less frequent. The OC Genie and Clear CMOS buttons are on a different corner of the Trinergy than the GD80, possibly to make them more convenient for users running inside a case. 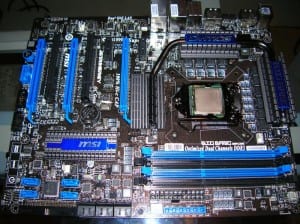 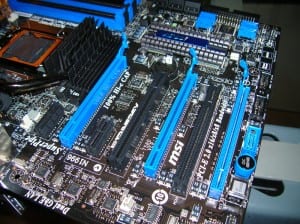 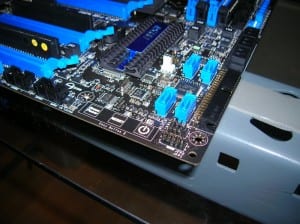 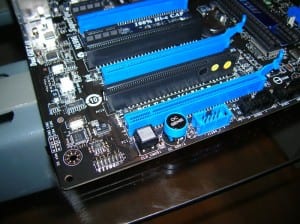 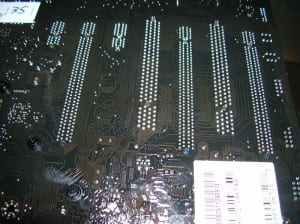 On closer inspection, the first thing I noticed (although it’s at the top of the feature list) is the absence of can capacitors. In fact, there’s not a single one on this motherboard. They’ve all been replaced with what MSI calls Hi-C Cap. These capacitors not only provide a much cleaner look to the motherboard, but are supposed to be more reliable, with high heat resistance, long life, and a self-repair feature. They are also said to have lower ESR. These more compact capacitors are also going to make insulating for sub zero cooling much easier. This is supposed to be the first motherboard to fully utilize the Hi-C Cap feature. 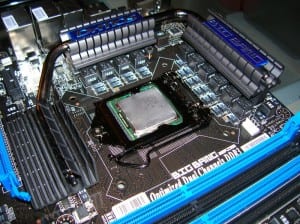 The second thing I noticed about this board (and at first was quite disappointed) was the lack of an onboard debug LED. As it turns out, that (along with the Direct OC buttons) was integrated into the OC Dashboard. At first, I was wondering how useful this little device was going to be. I figured sure, it’ll be pretty cool for some people, but when am I actually going to have a use for this? When I noticed all the things it does, my doubts quickly vanished.

When the system is booting up, the OC Dashboard acts as a POST code reader. But not only does it show the codes, it tells what they are. This completely removes the need to have to look anything up when you’ve got a boot issue (and a code is provided), it says exactly what’s going up on the LCD.

Once the system is booted and into Windows (or other OS of your choice), the OC Dashboard allows you to do several things that eliminate the need for several software utilities. First, it shows fan speeds and provides temperatures for CPU, System, and Dr.MOS (each one individually). The device also lets you adjust bclk up or down in 1mhz increments, replacing the Direct OC feature of the P55-GD80. But, with bclk adjustments, there’s often a need for voltage adjustments. Luckily, the OC Dashboard makes this just as easy, putting complete control of the following voltage values in the palm of your hand: CPU vCore, VTT, DDR, and PCH.

However, the LCD on this thing is tiny, so it may take some effort to read. But I’m sure it keeps costs low, I’d rather it be the size it is than have to pay more for a bigger screen if it came down to it. 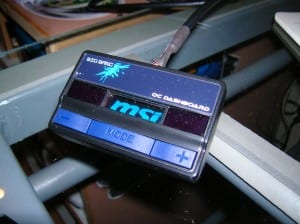 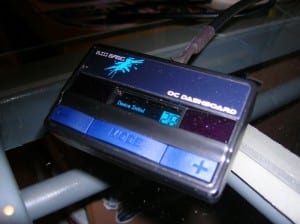 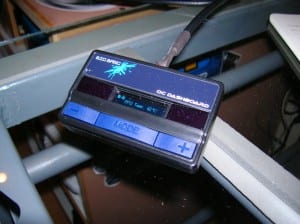 I’m no audio buff, and all my gaming is done on my 360, so the sound card was little more than a neat bonus for me. For benchmarking, it was one less thing I had to turn off in BIOS. But I did use it for the gaming part of this review for obvious reasons. 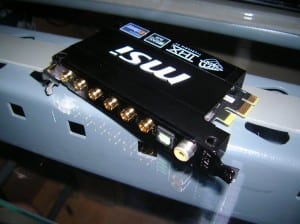 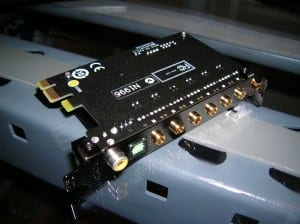 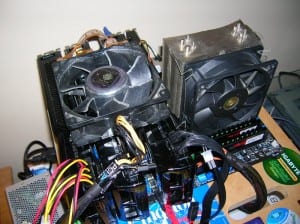 For testing, I wanted to do my usual hwbot-style benchmarking. But, since this is a gaming motherboard, I decide to concentrate on testing SLI scaling. I used realistic settings that anyone can run for 24/7 with similar hardware. The fans on the cards are cranked to 100%, making my testing area both warm and loud. I’d like to point out that running dual PSUs (this is my first time) is not as tricky as people have told me. And since I didn’t want to spend $20 on a dual-PSU adapter, I shoved a paper clip between the green wire and ground on the 24-pin ATX connector on the second PSU. 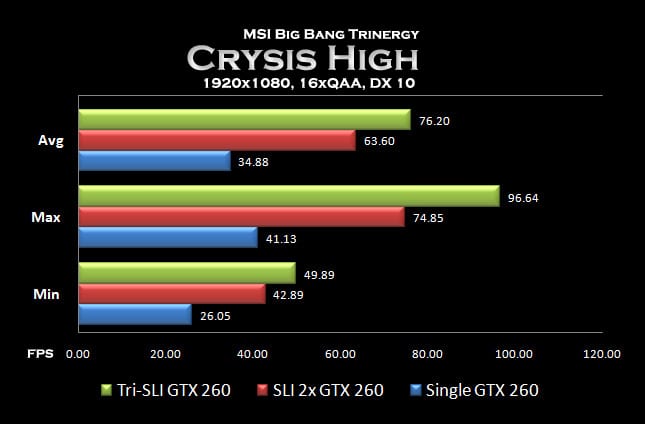 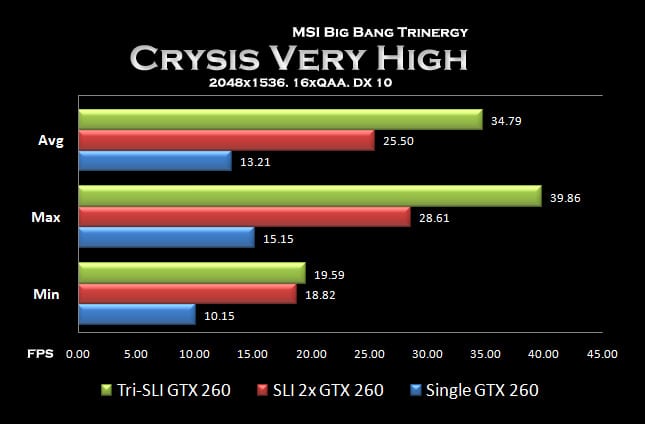 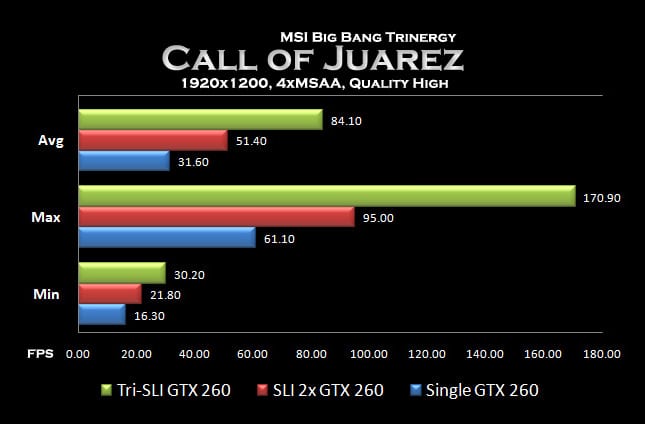 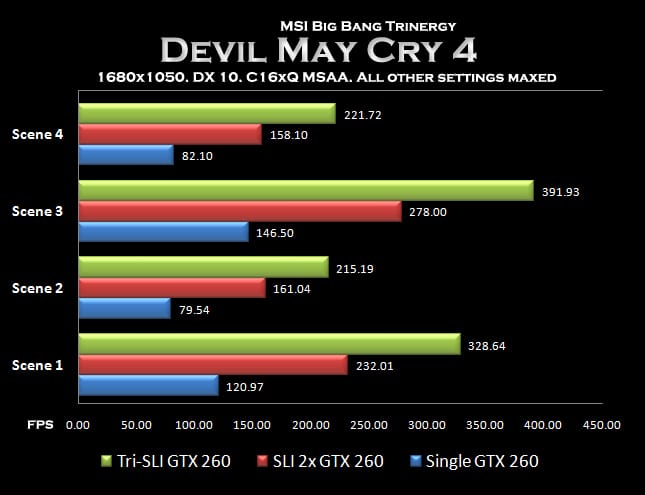 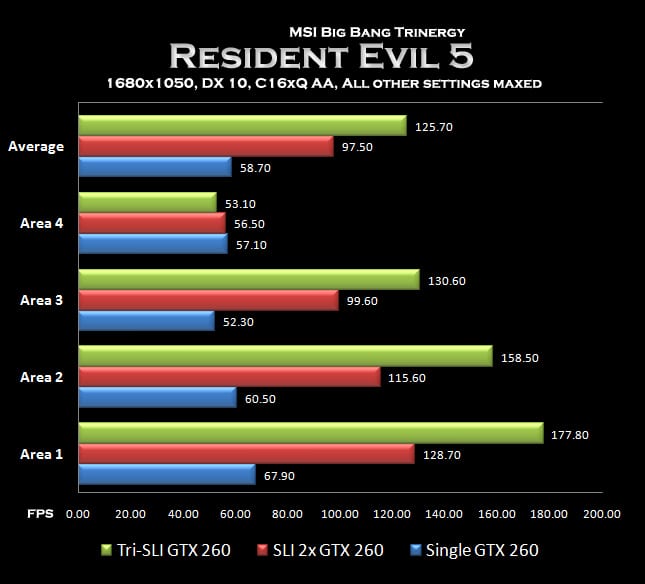 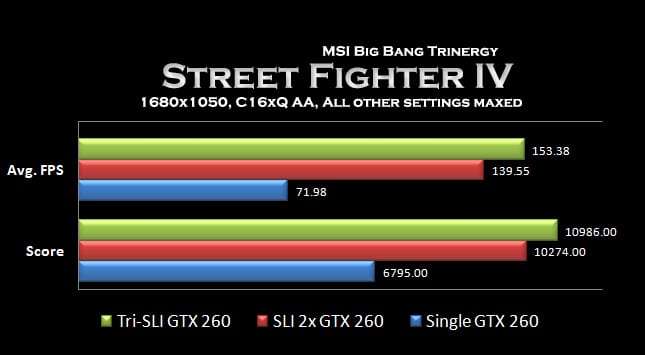 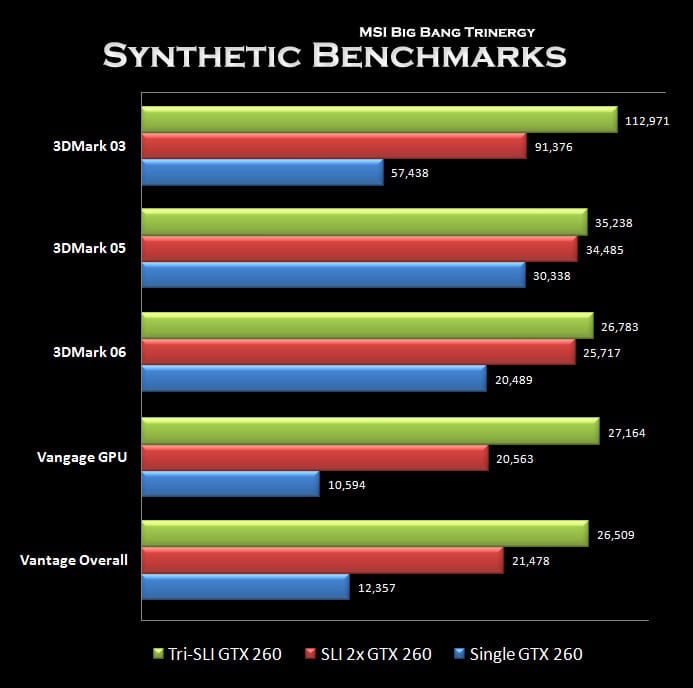 SLI scaling is great from the testing I’ve done, and this board does everything MSI says it will. Don’t be mad at the first in the Big Bang series not having a Hydra chip, I know that’s what everyone was hoping for. That’s coming soon enough in the form of the Bing Bang Fuzion, and I’m willing to wait it out if it lives up to all the hype. But until then, the Trinergy is a perfect board to fill the gap.

I love this motherboard. Overclocking is super easy, almost identical to the GD80 (which says a lot). With the addition of the nf200 chip and OC Dashboard, I’m pretty sure this would be my number one choice for P55 motherboards if you’re running more than one graphics card. One chance I would like to see is the OC Dashboard’s LCD size. It’s just too small to read quickly. Also, as a bencher rather than a gamer, I would like to see the clear CMOS button moved back to the lower right corner for easier access. But, that’s purely a matter of preference. Overall I would give this motherboard a 9/10, since it lived up to or surpassed all of my expectations. Now it’s just a wait for the Bing Bang Fuzion.