Try it out and tell us how it does.

SUMMARY 1/18/01: Iwill’s KT133A board looks like a winner – fast, stable and with Vcore and multiplier settings in BIOS.

Iwill’s is taking aim at the consumer market and is scoring some nice hits. Arguably producing one of the best VIA boards (VD133 PRO) around, Iwill’s KT133A board looks like a sure Socket A winner (also available in a RAID version). I threw a lot of stuff at this board and found it to perform quite well. 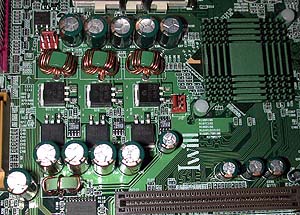 The power transistors; the greenie is not actively cooled but did not get excessively warm as long as there is an air flow over it.

VIO is also an on-board jumper with settings of default, +5 and +10%. VIO came in handy when I tried to max out the board at 166 MHz – at least it permitted me to get into Windows, although not stable. I believe the problem was SDRAM stability, not the board (BTW: Iwill includes jumpers with little handles on them – a nice touch). 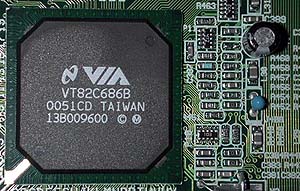 The little blue thing is the system temp thermistor.

Installation was effortless – loaded Windows, board drivers etc. and it was off and running.

One of the joys the KT133A chipset now gives us is the ability to blend multiplier and FSB settings pretty much in an unlimited manner. As an example of what this can do for you, I ran four tests with different combinations yielding 1100 MHz. The test was with a blue core T-Bird 750 at 1.85 volts, water cooled by Danger Den’s copper Maze waterblock and Cooling Cube with a Danner 1.5 submersible pump.

CPU and Multi-Media showed virtually no change since all tests were at 1100 MHz, give or take a few MHz. Memory scores, however, do scale with FSBs.

The advantage of higher FSBs is apparent in Quake and 3DMark 2000 scores – although note that the increases are not linear – increasing FSB by 57%, for example, results in an 18% increase in 3DMark 2000 scores. Most of the increase takes place from 100 to 138 MHz, suggesting that settings above 133 MHz are a bonus but also an example of diminishing returns.

I tried to run benchmarks at 166 MHz but my RAM couldn’t handle it. Although I could boot into Windows, doing anything substantive was not possible. The board was willing, but the RAM was not (at these speeds, I increased VIO by 10%). The real challenge at speeds over 133 MHz is finding fast, stable RAM.

I am trying out a diagnostic board called “PHD PCI” that purports to stress test all components on a motherboard; you can see more about it HERE. The company that makes it, Ultra-X, markets a series of hardware and software products for diagnosing PCs (I am also testing out Quick Tech Pro, a software test suite). The PHD PCI board is not cheap – $800 (They’ve given me a 15 day trial period before I have to buy it). However, what’s neat is I can run it in “Burn-in” mode to

“…verify that new or repaired components are functioning properly. Burn-in testing can also be used to isolate random of intermittent failures which do not necessarily prevent a system from booting, but may surface during extended testing sessions (e.g., stuck interrupts, RAM problems, etc.)” 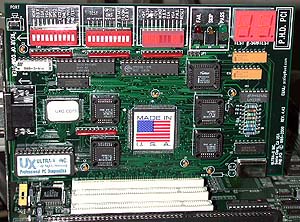 The PHD PCI does Post tests as well as Burn-in.

It tests all components against industry specs. I used this board in Burn-in mode for about three hours so far and have not seen any problems with the board yet, so I think I can report that it is a stable product at overclocked speeds; I am running Burn-in at 7×157 MHz, so it is running in an overclocked environment (which is a tougher test due to out-of-spec PCI settings).

I think the PHD PCI board confirms what I was able to achieve – running benchmarks at 157 MHz without any problems.

All told, Iwill’s KK266 KT133A motherboard runs well, stable and has the BIOS tweaks we all like. I think Iwill has fielded a very competitive product for those of us looking for Socket A systems.

Minor point: The manual is quite good, although there are some errors. For example, under “Specifications” it lists an AMR slot and 5 PCIs; the board schematic incorrectly locates the VIO jumpers (it’s in the upper right hand corner).

I‘ve read through the net (went to many forums) that a lot of people are having problems with the ASUS P3V4x on-die thermal diode. Whatever program they install (Motherboard monitor 4.17, ASUS Probe) they get unbelievable and funny temperature readings.

Either Way, It Takes Care Of Your Headache