Today we will be looking at a two cooling solutions for our video cards from JetArt Technology. First up is the VC2000, a universal VGA cooler which fits on most high-end ATi and nVidia cards. The cooler comes with various mounting brackets, 8 BGA memory sinks, thermal paste, frag tape, and a blue LED fan.

The second product is the VC1000, a slot cooler that sits beneath your video card to help expel excess hot air. It also has an adjustable fan on the side, which can be positioned to blow over high heat areas on the card, such as power regulation circuits. 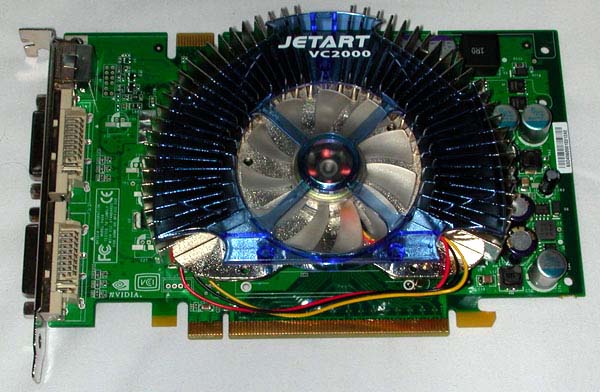 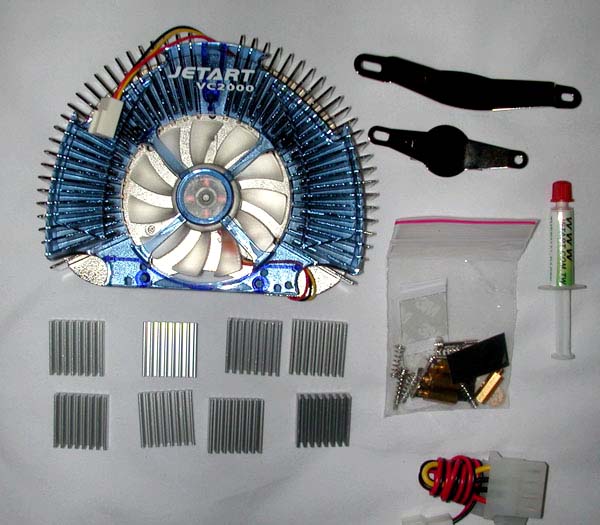 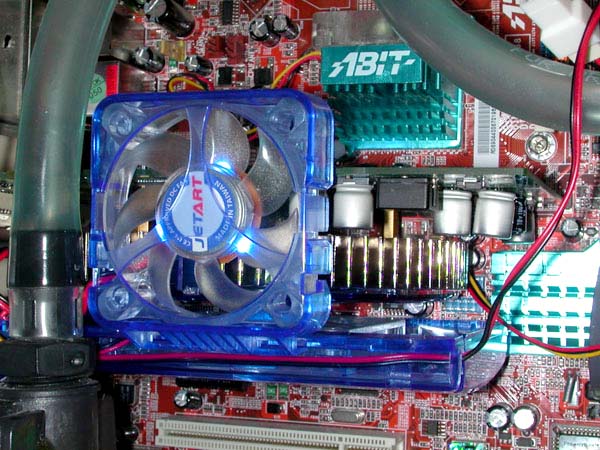 Before we review the cooling products we need to establish a base line. This is done by testing Forsa’s stock cooling, so we have something to compare it with. The half copper / half aluminum used in this heatsink has a lot to lust for but falls short on performance. Although it made little noise and temps were acceptable, I wasn’t able to get the slightest overclock out of the stock cooler.

It did appear that the stock cooler was slightly hampered by the thermal pad that was utilized. To give the cooler a chance, the pad was removed and replaced with Artic Silver thermal paste. A temperature drop of 5ºC was realized, but again, the card refused to overclock. Let’s get rid of this stock cooler and see if the JetArt coolers will edge we need to squeeze the extra MHz out of this 7600GT.
{mospagebreak}

Installing the VC2000 was quick and easy. It required inserting 2 standoffs into the base of the heatsink, and then 2 screws and a simple crossbar bracket hold the heatsink to our 7600GT. While it sounds simple, the process is a little more difficult; I often wished I had three hands, or thumbscrews.

Holding the card, heatsink, bracket, and trying to operate a screw driver isn’t the simplest task, but it was accomplished after a few tries. A four point mounting system would have been more effective, as it applies more even pressure across the GPU core, but the hardware included does get the job done. After further inspection I found that the rather large heatsink blocks one of my PCI slots. Luckily I use mostly onboard components, but I could see this being a problem for different setups.

Now that we’ve got it installed lets take a look at some results:

The VC2000 provides for a 4 degree improvement at load and 8 degrees idle. Stock temps were 54ºC idle/67ºC load, and the VC2000 takes them down to 46ºC and 63ºC respectively. Ambient temperatures were 74f and the case temps were 31ºC (all tests run with case side off). Not as big of an improvement as I would have hoped for, but an improvement none the less.

The VC1000 is PCI slot cooler for all video cards. It has a built in fan speed adjuster on the rear of the card, accessible externally, a blue LED light which matches nicely with the VC2000 cooler, and an adjustable side mounted fan.

Installation of this was similar to that of any PCI card, with the addition of a 4 pin power connector. The down side to a product like this is that renders 2 more PCI slots unusable, as well as making it difficult to position my pump where I wanted it. On the up side it did take another 4 degrees off of our load temps, as well as 2 degrees from the idle temps. (44ºC Idle/59ºC loaded). It also gave me some more clock speed, which is mainly what we are after. 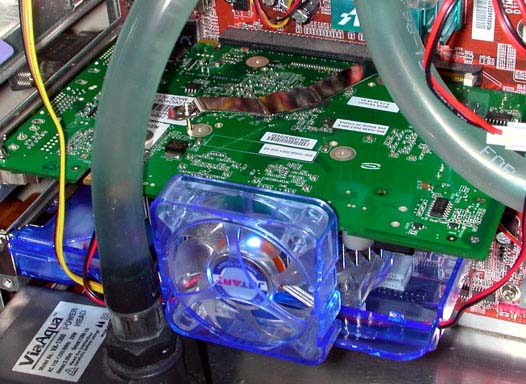 Pros: Both the VC2000 and VC1000 were extremely quiet as well as quick and easy to install.

Cons: Both units are quite large and cover over 3 PCI slots when used together. This could be an issue for users with multiple PCI cards. Mounting of the VC2000 can be tricky, sometimes you wish you had 3 hands, or thumb screws.

Overall JetArt did a nice job with these two products. Both provided an increase in performance and a decrease in temperature. They also looked good doing it.

Special thanks to JetArt for providing these two products.

We mentioned the other day that AMD seemed to be having a “secret sale” on some processors. Now Forbes is reporting more price cuts April 9. They cite a financial analyst, who apparently saw something with an AMD logo on

With regards to all the talk about noise and fanless system: Here’s my severely underclocked TBird (1200) running at 550Mhz, at 1.45v, without a fan, after running Prime95 for a couple hours. (Ed.note: Kevin’s picture showed completed runs of Prime95,

The War Approaches Your Door

News Item One: RIAA Gets Into “Sharing,” Too College students “share” files; now they’re going to “share” between $12,000-$17,000 each with the RIAA. News Item Two: RIAA To Chat With You Shortly? RIAA plans to send a million IMs a