The good herren at Alphacool were nice enough to send a sample of their performance watercooling kit, the KOM Alphacool Xtreme Pro 360 Rev.2 12V, to test. Alphacool is a German company well known in Europe for cooling products.

The waterblock ships without the tube mounts installed: 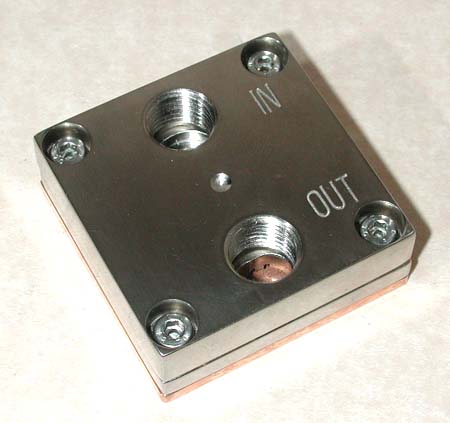 The base appears well finished: 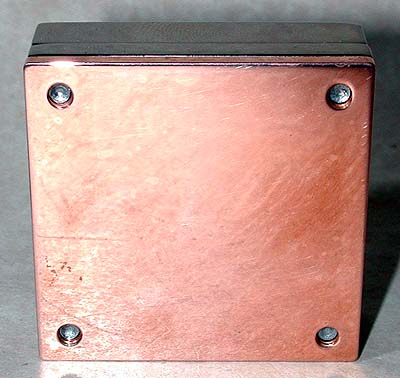 The dimple in the top of the waterblock is for the CPU mounting gear: 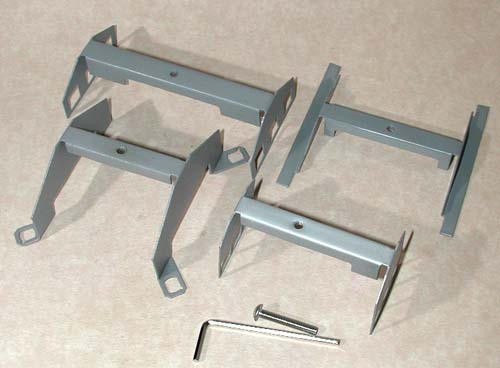 Each unit is tapped for the long screw pictured above – this exerts pressure at the center of the CPU IHS/core, where it should be. Using the provided allen wrench, the screw rests in the dimple and pressure is exerting as the screw it tightened – simple and very effective.
{mospagebreak}

In this kit, assembling the waterpump – reservoir requires some time and instruction; since I could not find any detailed instructions in the manual or on Alphacool’s website (according to Alphacool, instructions should be available in two weeks), what follows are detailed assembly instructions (I should also note that fittings are metric):

There are three parts – the 12 volt waterpump (follow the link – a very interesting design), a new plastic pump housing and the reservoir which bolts onto the waterpump: 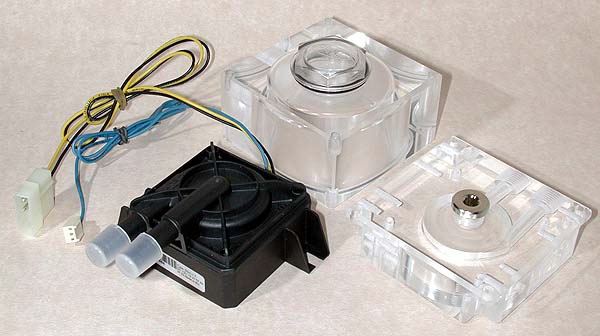 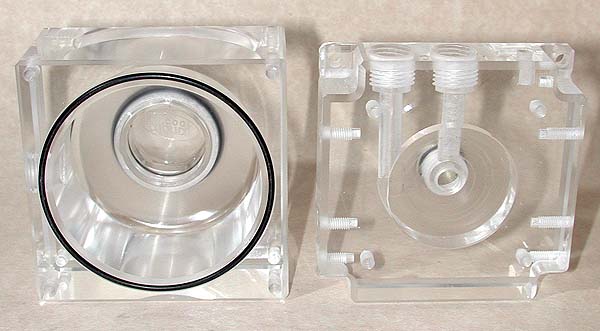 And a view of the tops:

The first step is to remove the impeller housing from the waterpump – there are four torx screws to remove from the bottom: 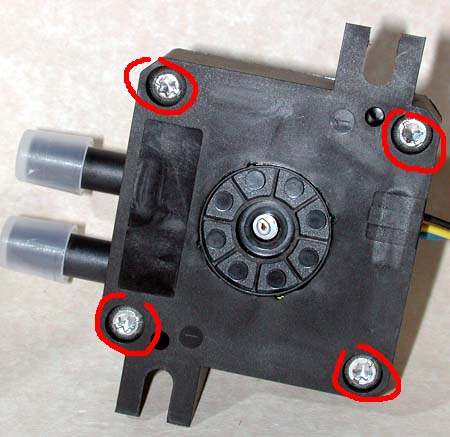 These screws require either a thin blade screwdriver or a torx driver: 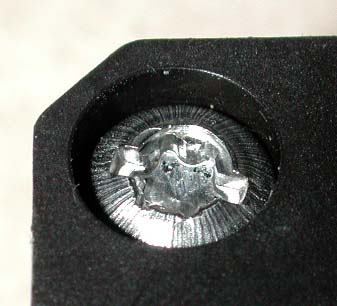 The pump’s impeller housing easily pops off once the screws are removed: 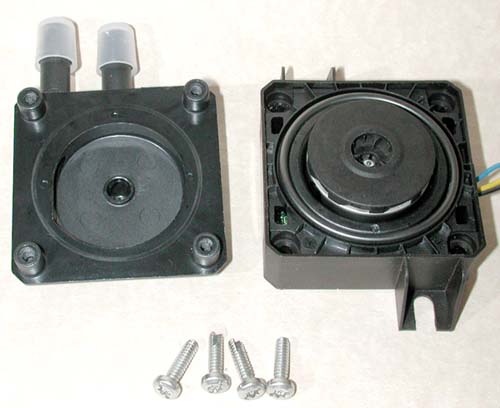 The old impeller housing (left) and pump screws are not needed – place them someplace where they will not be confused with other parts. With the long screws provided, bolt the new impeller assembly to the pump: 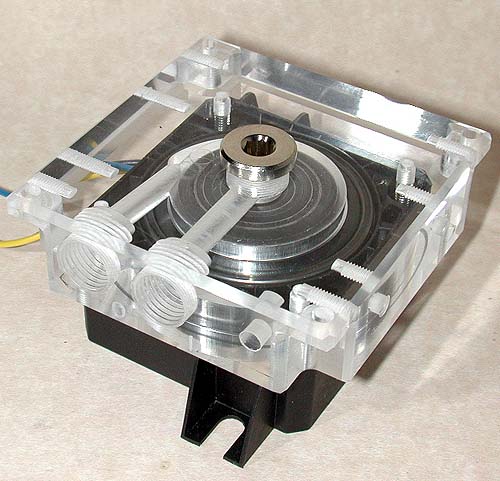 The new screws require an allen wrench – these are metric, but I could use english wrenches no problem: 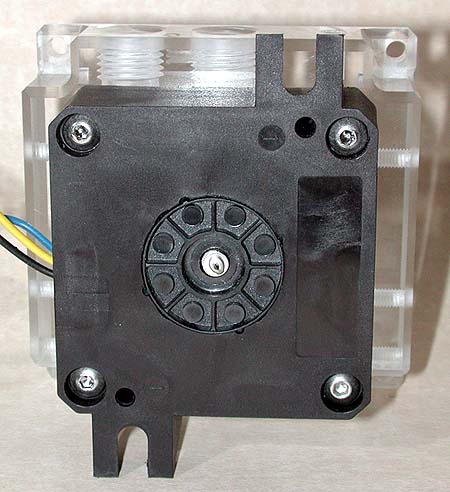 Remove the intake bolt from the new impeller housing: 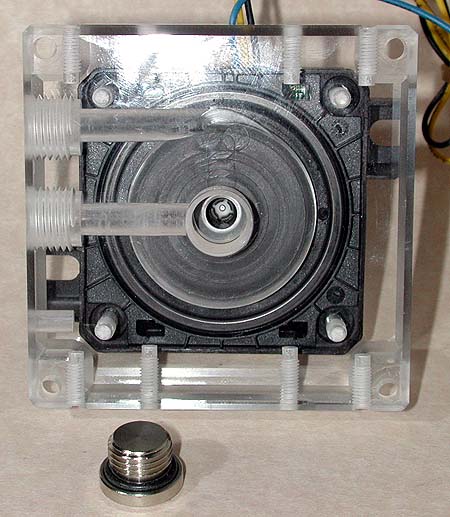 Take the bolt you just removed and screw it into the intake port of the impeller assembly (the intake will be in the reservoir): 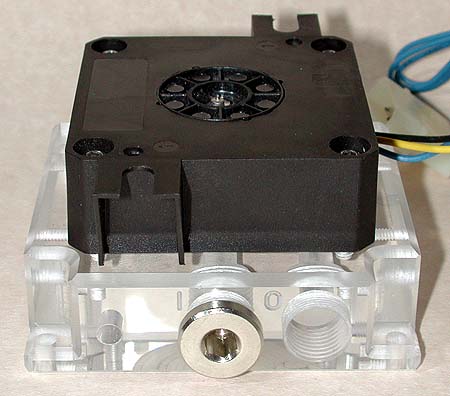 With the short screws, bolt the reservoir onto the impeller housing: 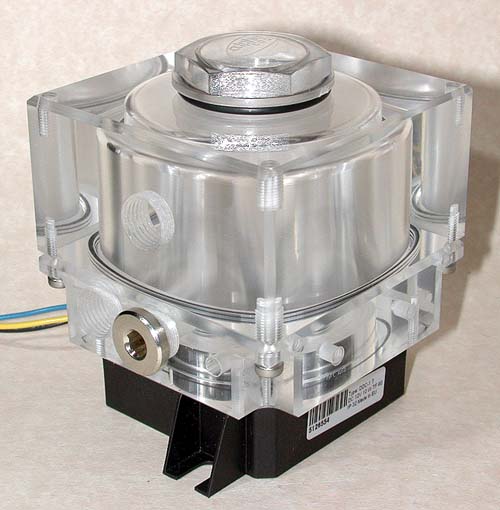 The last step is to screw in the house fittings included with the kit: 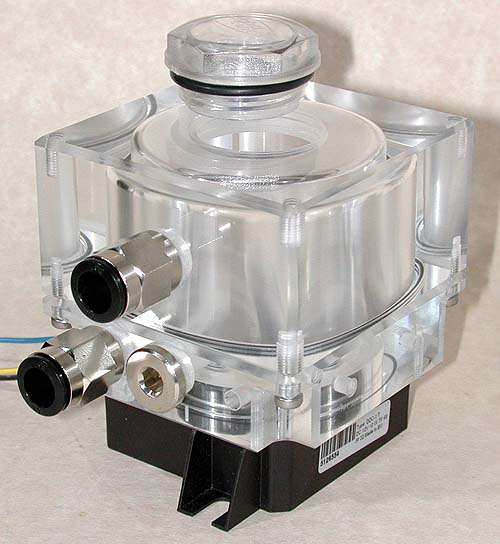 And that’s it! It took all of about 15 minutes, working slowly, to complete the job.

The radiator is a large 3 x 120 mm fan unit, complete with torx screws to mount the fans: 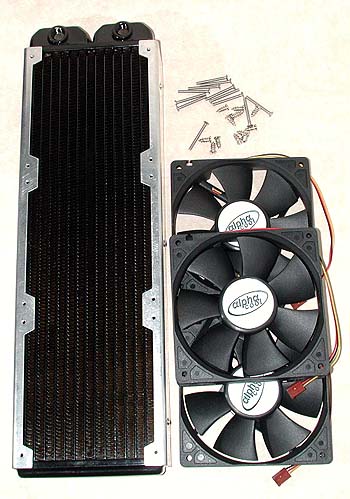 Parts that ship with the kit include all necessary hardware: 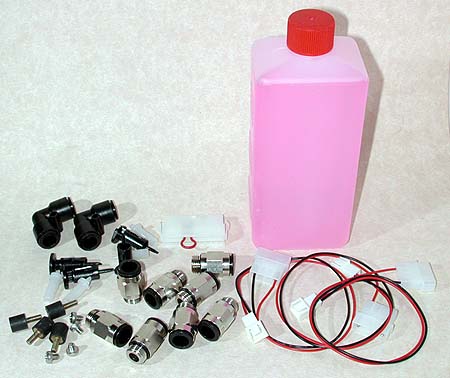 Here’s the kit assembled and ready to hook up: 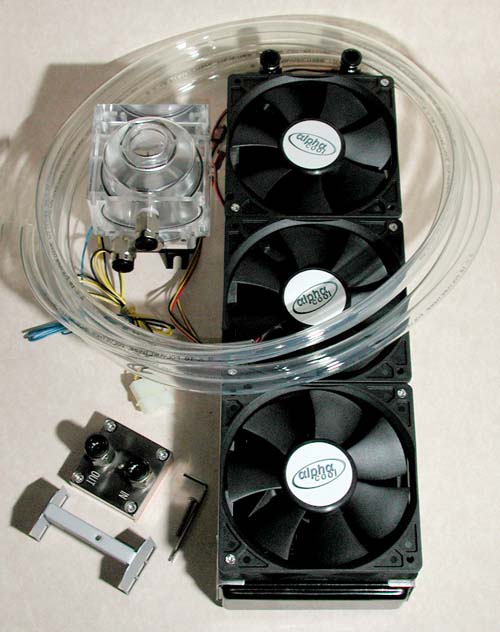 The Alphacool Xtreme Pro was tested using the CPU Die Simulator. Noise was measured 8″ from the fan’s intake with a Radio Shack sound meter; 50 dBA at this distance is very quiet 3 feet from the fan. For this test, I used both the large three fan radiator included with this kit and a one fan radiator of similar construction to give a range of test results based on different sized radiators. 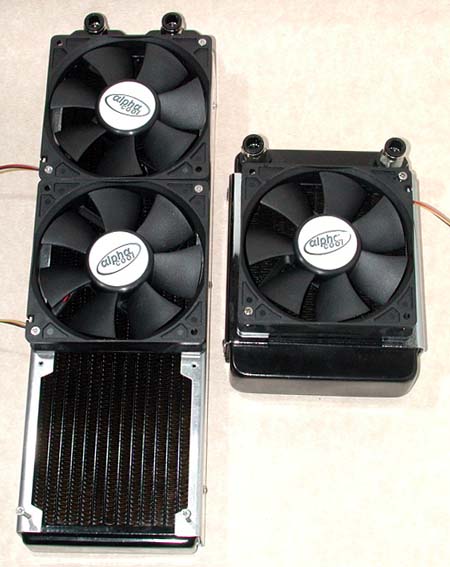 I found the fans to be very quiet – at 1200 rpm, these are slow-turning, low noise fans. I found performance with the three fan radiator to be excellent; downsizing by using a one fan radiator (one 120 mm fan) degraded performance by 0.10 C/W – a difference of 10ºC at 100 watts under stress, not bad for such a radical change in radiators.

Alphacool’s Xtreme Pro 360 Rev.2 12V watercooling kit is has a lot going for it – great performance with super waterblock mounting hardware make it shine. The three fan radiator is quite large and will be a challenge to mount in any case; the one fan radiator results are still quite good, and a two fan radiator might be a nice balance between best performance and ease of installation.

The only concern I would have is the plastic reservoir tested with this kit; during the test period, the reservoir’s design leads to aggressive swirling in the reservoir, resulting in some bubbling noise at times and some small air bubbles in the water, visible in the clear plastic tubes. However, based on test results, I do not think performance was noticeably affected. I heard no discernable noise from the waterpump – a very nice addition to this kit.

Overall, this is a performance kit worth serious consideration.

This kit is available from Frozen CPU in the USA.

EK Waterblocks (EKWB, or just EK) really needs no introduction in the water cooling world. They are a stalwart in the water business and produce lots of good products. While Swiftech may be more well known to those outside the niche, EK has built itself up to be just as viable a solution, from the reservoir, through the pump, block and radiator; including the fittings that bind them all together. Today, we will be looking at their full water cooling kit, the EK-KIT L360. It comes with, quite literally, everything you need to water cool your processor.