SUMMARY: Leadtek’s little brother, the GeForce 2MX, compared to the GeForce GTS2 turns out to be not so little – up to a point.

This is Leadtek’s GTS2 “lite” version. Turns out this card is not as “lite” as you might think, depending somewhat on what your system is. We are fortunate enough to have the GTS2 to compare against the 2MX, so what follows is a brother-vs-brother shootout.

Interesting results! Looks like the little guy does a very credible job with the Celeron 533a @ 800 MHz. The differences are in single digits – quite an accomplishment for the “lower priced spread”. In general, figure about 5% less performance.

The Duron 650 @ 935 is more interesting – here we see the performance gap opening up, but not so much for Quake (3.5%) – the 3dMark 2000 gap is almost 30%. I would speculate that the cache-chocked Celeron is more the stumbling block accounting for the performance difference between the two cards. Looks like the uncrippled Duron has enough breathing room to let both the GTS2 and 2MX fly.

To illustrate this point, I benched the 2MX with 3dMark 2000 using the Duron at the following speeds:

Note that at 800 MHz, the 2MX/Duron is 12.9% faster than the Celeron @ 800 MHz. We also start to see diminishing returns setting in: The 3dMark 2000 scores are increasing relatively more slowly than the increase in CPU speeds. As a rough guess, I would say the 2MX would top out at about a score of 6000-6200 with this setup – not too shabby!

I just started to play with the overclocking settings for the 2MX; I don’t think you will find as much headroom on this card as the GTS2 – more testing to determine this point.

On a price/performance basis, I think the Leadtek GeForce 2MX is going to be hard to beat. It looks like a deal for Celeron based systems and, for most users, I wonder if you can see a real difference between the two cards.

If money is no object, the GTS2 is the way to go if you have a system that can deliver a difference; otherwise the 2MX is a clear price/performance winner.

PS: I should mention that this card also has a TV OUT plug – you get a cable with it.

SUMMARY: Overclocking the Leadtek Geforce 2MX shows that this card is not far from its limit.

We continue our test of this card by seeing how far we can push it. As you can see from the pic below, 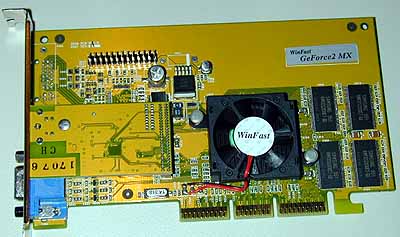 the 2MX ships with a GPU fan – many others are not using active cooling, so this is a step in the right direction. Always curious about what lies underneath, I took the fan off to see how well it was greased: 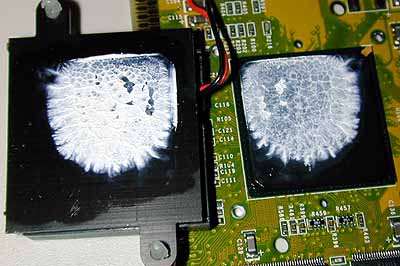 Turns out not too well! Easy enough to fix – I cleaned up what was there and added a nice thin coat of new grease. I then proceeded to give it a try and see how far I could push things. One of the limitations of any card is the memory chips, and this one ships with four Samsung 6ns chips.

I used Leadtek’s Speed Runner to vary GPU and Memory settings with the following results for Quake (800x600x16):

Hmmm…Looks like the memory chips are really stressed out – not a lot of headroom here. At 6ns, these chips are spec’d to run at 166 MHz, so I figured I had to pay more attention to these. The obvious hack is to add some cooling – I found the GPU to average about 40 C, which is not terrible (I measured temps at the back of the GPU). I felt the memory chips and they were not terribly warm, but I figured a little heatsink can’t hurt: 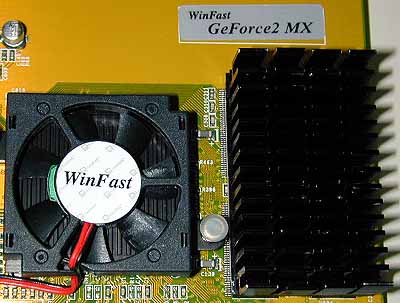 After searching around for a while in my old heatsink pile, I found one for a PII that was about the right size; I cut off a slice of it and used thermal epoxy to mount it on all four chips, as shown above. Not content, I figured why not throw a fan on it and mounted a 50mm as shown below: 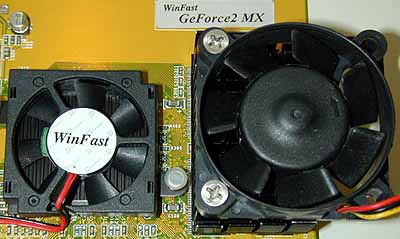 Now I would love to tell you all kinds of marvelous things happened as a result of this handiwork; it did get better, but not by much. This time I ran 3DMark 2000 as the final test, along with Quake:

Active cooling on the memory banks did help somewhat, but the Samsungs do not like being pushed too hard (at least these particular four chips). What might get you a little better performance is a larger heatsink on the GPU; however, note that the fan is wired to the card, so any other cooling will require clipping these wires.

I also think that any percentage gains will be limited to single digits – this card is close to its limit as is, which, by the way, ain’t bad. Drop us a line if you have this card and tell us your experiences with it.

Another title could be “Everything you should know about the MX but nobody took the time to tell you”. The real title should be “The variables affecting the frame rate of Quake 3 timedemo demo001 using the GeForce MX video