Cooling a laptop – very aggressive intrusion into the case – Eric

After several days of answering numerous emails about my Laptop Cooling Mod Project, I decided that it was time to take it to the next step! First things first, lets get rid of that slat of aluminum that just sits on top of the CPU. So I ordered one of Vantec’s Copper Chipset Coolers and started in swinging! (OLD versus the NEW) 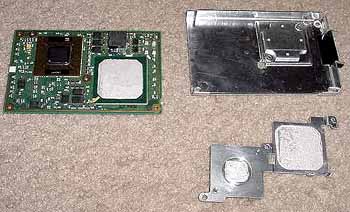 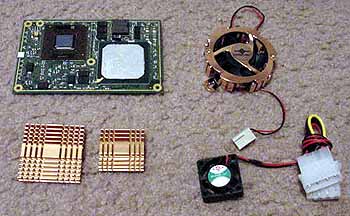 Next was trying to figure out how to cool the video chipset. If you recall, there was a plate that stuck up through the motherboard and was cooled by a thin piece of aluminum under the keyboard. What I did was purchase a 12V case fan to replace the small 5V fan.

One problem: There was 15V coming into the system! So I had to do a little math to figure out what size resistor I was going to have to get from the local Radio Shack. What I did next was to cut the 12v 4pin connector off and to solder on some longer wires along with the 33ohm resistor (in-line). 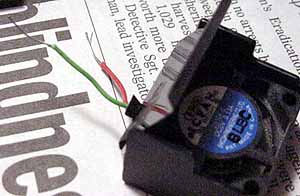 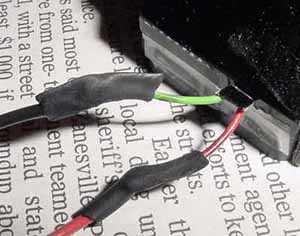 After soldering the resistor on, I had to make some side panels to go around the fan to help in directing the airflow into the case. What I’m trying to accomplish is to get the air to flow into the case via the 12v fan located on the side, under the CPU plate, and across the PCI chipset. 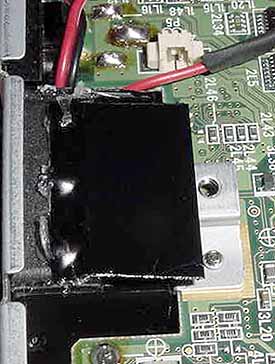 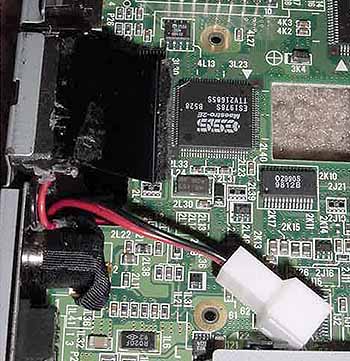 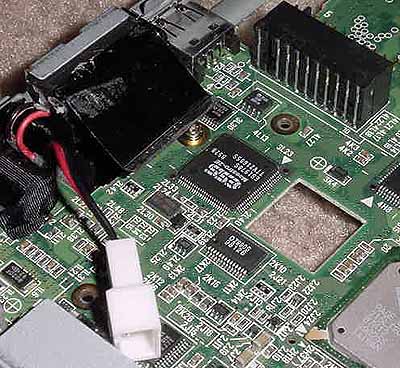 After that was done, it was time to start installing that brand new Vantec Copper Cooler! First thing I found out was that it was too wide to fit in the case. So I quickly pulled out the wire cutters and went to work modifying my new cooler. Everything pictured below will come with your new Vantec Copper Cooler (2 copper heatsinks also included not pictured). 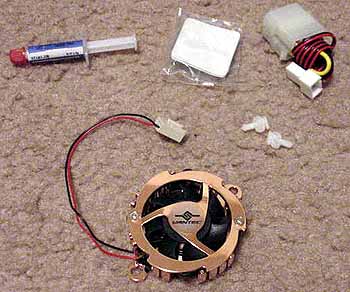 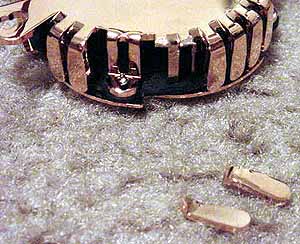 After making some adjustments to the side, I started wiring the fan plug into the same place the smaller fan was connected. I decided to keep the adapter plug that came with the cooler, so that if the fan quit working I could just order another and install it without having to unsolder the connections.

Next was to transfer the heat from the PCI chipset to the CPU back plate. This was originally done by way of thermal pad (wrong answer)! I decided to make use out of that old slat of aluminum, which was used to cool the CPU originally. The third picture just below shows how the two go together. 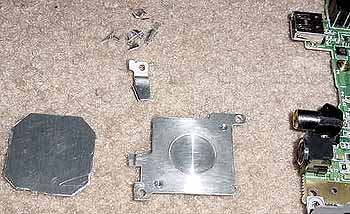 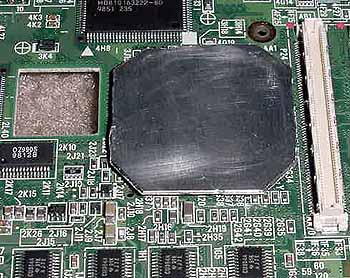 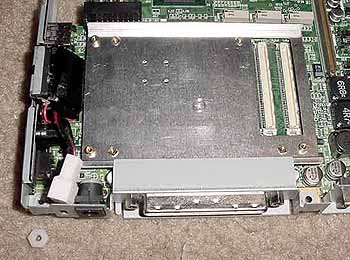 After making sure that the two pieces above made good contact, I had to drill and thread a hole in the CPU plate. This hole will be used to help mount the new Vantec Copper Cooler. 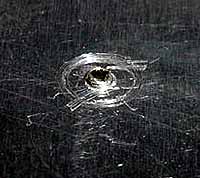 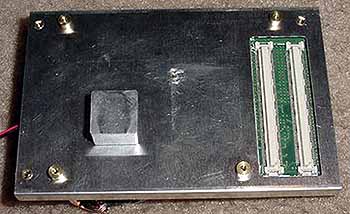 Now it was time to solder in the 12v side fan and the Vantec’s plug directly to the motherboard. The red wire with the 33 ohm resistor on it goes to the fan mounted on the side. The other red wire pictured goes to the Vantec plug. Same applies to the black wires pictured. As you can see I didn’t place a resistor on the Vantec’s fan because I figured it could sustain the 14.9v of power, seeing it’s a larger fan. 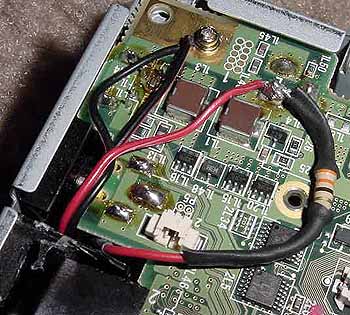 Now let’s mount that puppy! First thing I did was run down to the local hardware store and pick up some small screws, nylon washers and a couple nylon spacers. It’s now time to add the key substance that pulls all these parts together: Arctic Silver 3. I placed a thin coat on the CPU and the AGP chipset. Next was to start installing the nylon washers and spacers to hold the thing together! You can see the finshed results just below: 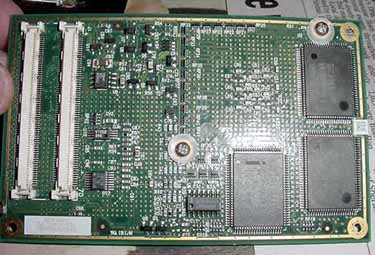 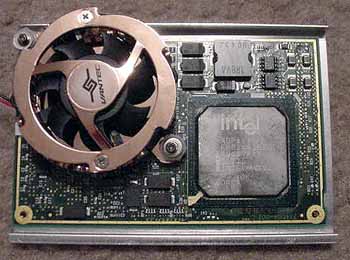 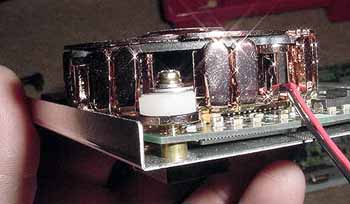 Next is to take care of that AGP chipset! There are 2 Copper heatsinks that come in the Vantec Copper Cooler kit. They are applied using the special 3M Thermal tape which is also supplied in the kit. I was originally going to mount the heatsink to the chipset with a fan. BUT, I was unable to figure out a way to do it since I needed the rest of the holes to mount the CPU into the laptop. 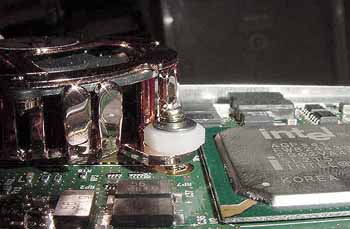 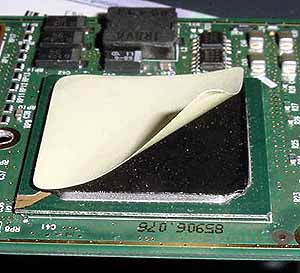 Since the Vantec fan blows down, I calculate that the air from the Vantec’s fan will run across the AGP chipset heatsink and help aid in its cooling. Below is the pictures you have all been waiting for! I installed the CPU and bolted it down. 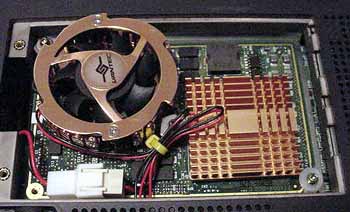 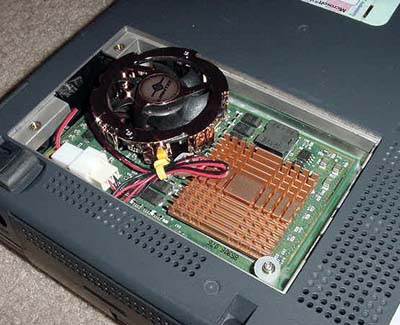 Here are a few more close-up pictures for you! 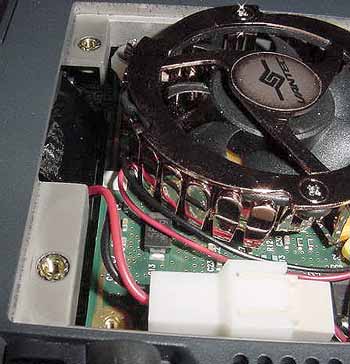 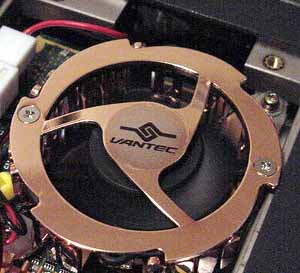 Now for the FINISHED PRODUCT! The first picture right below shows the bottom of the laptop with the cover OFF! The second picture shows it with it on! 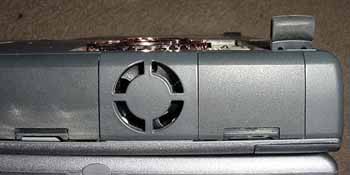 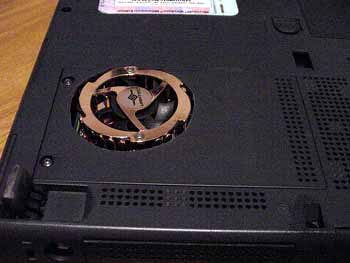 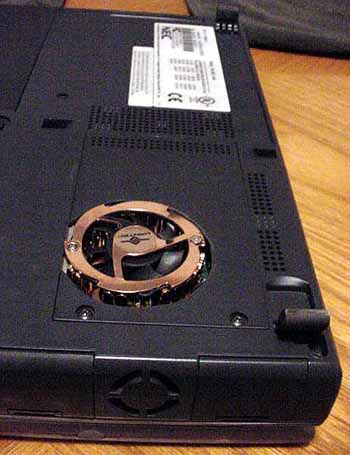 Well I hope you enjoyed this project as much as I did. I just felt that its time to move on to unexplored parts of the overclocking/mods world. THANK YOU!

SUMMARY: A Beautiful HTPC Case for under $100.00. Today we take a look at one of Antec’s many new products in the New Solution Series cases the NSK2400, a MicroATX desktop case designed primaraly for use as a HTPC. The

Viewsonic is now talking about “1ms” response on their flat screens. This claim is pretty well derided here: There’s more to this than what one manufacturer is trying to get away with, though; they’re hardly the only ones. As the

Yesterday, I mentioned that AMD had an analyst conference with with lots and lots of slides Today, let’s look at more of them, and see what they tell us. For The Short and Medium-Term This confirms much of what we