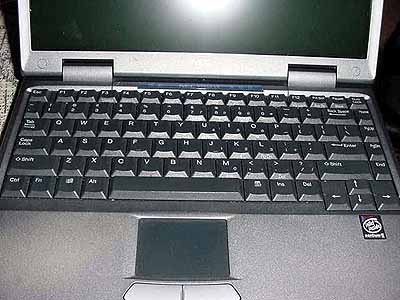 I decided to start a new project since so many of us have already mastered the “desktop” scene. I was wandering around the house one day trying to find something new to add to my desktop when I glanced down at the desk and noticed a Totally Virgin laptop sitting there! IDEA! “Why not try some mods on it?”, I asked myself. My response was,”hell no that thing cost to dang much!”

So after several minutes of personal debate, I decided to just take it slow and watch what I was doing! I’m not sure if most of you realize this, but there isn’t hardly any sites out there for Laptop/Notebook mods! I apologize if this seems drawn out, BUT I figure it’s better to have good instruction when dealing with an EXPENSIVE piece of equipment VS those backward translated instructions that come with your compute desk! LOL!

There are two places that a Laptop/Notebook use in cooling. One is directly attached to the CPU and with a fan off to the side of the case to help remove hot air.

The second is under the KEYBOARD utilizing a piece of aluminum like a heatspreader. Let’s have a look at the CPU cooling first and then we’ll take a look at the heatspreader under the keyboard. The first thing I did was take the PII300 (CPU) out of the computer and then proceeded to tear it apart. 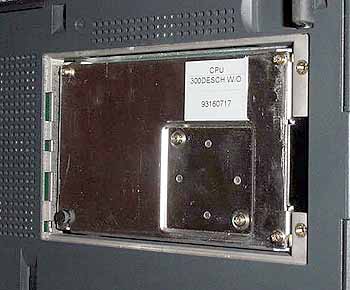 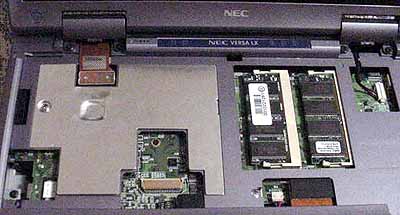 I quickly found that instead of using heatsink paste to get rid of the heat, there were thermal pads. You can see the thermal pad beside the “plus” looking heatspreader. I went ahead and put Arctic Silver II on it now for when I put it back together. The ONLY place I found paste was under the plate covering the CPU and chipset. 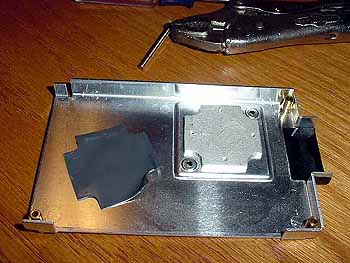 Next is removing the heatspreader plate from the CPU. The plate was held on by rivets that were pressed into the plate. You can see that I had to drill through the CPU board in order to get the rivet to release. I have circled the places the rivets are in red. 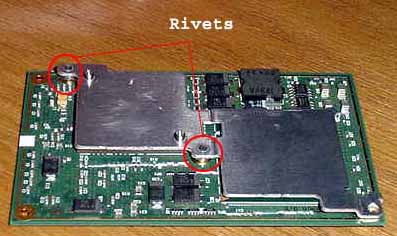 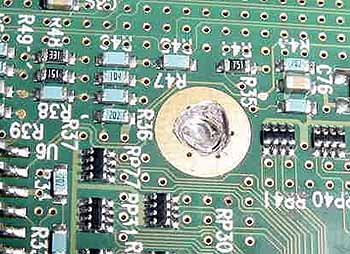 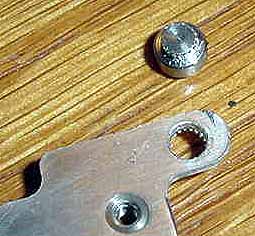 The pics below show what I found underneath that spreader plate – tons of WORTHLESS, old type heatsink paste. Well I managed to scrape and rub of that old junk so that I was able to place some good ol’ Arctic Silver II in there! 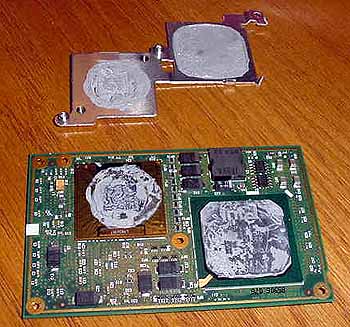 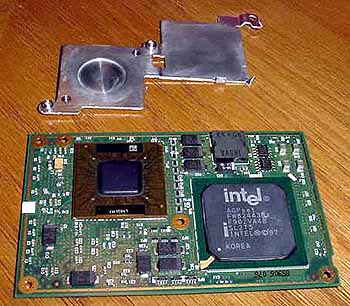 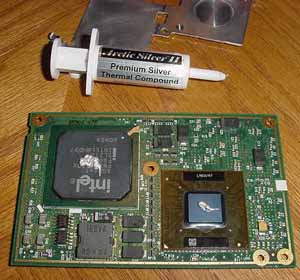 The next step of the mod is to file down the 2 feet/threaded holes that hold the (plus) shaped plate on to the top of the CPU’s plate. If you remember, there was a Thermal Pad in between the two. 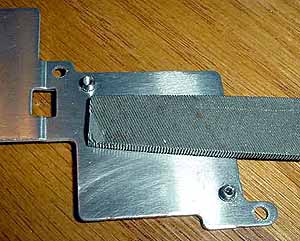 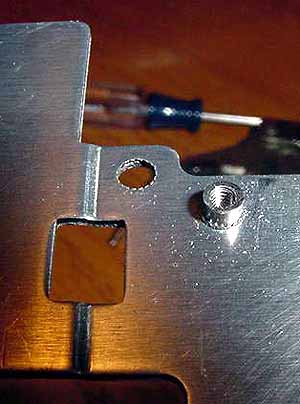 Now that we’ve finished that, I made sure the plate on the chip and the plate with the (plus) were making good contact. What I did was put some paste one and pressed the 2togetherr. 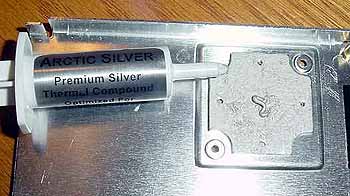 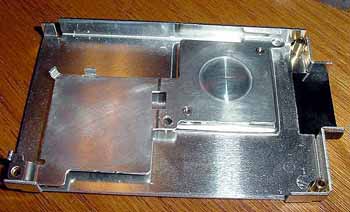 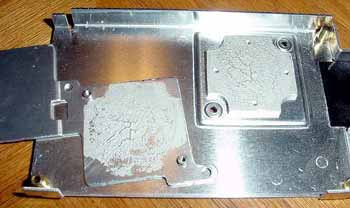 The very top cover (plate with the plus on it), will basically pull everything together and down to the mainboard by way of 3 screws located on the corners. The 2 screws in the middle are what pulls the (plus) down to the CPU’s heatsink plate. 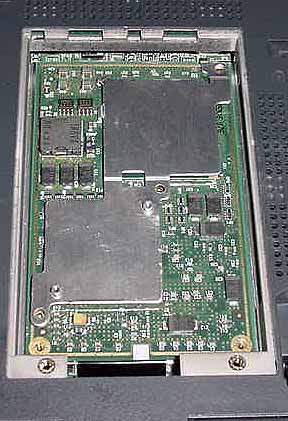 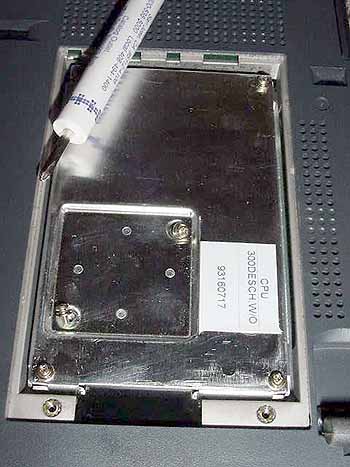 Now for the heatsink plate located under the keyboard. First thing is getting to it, which turned out to be a little harder than expected. I think the hard part was trying to get to the ribbon cable that connects the keyboard to the mainboard. 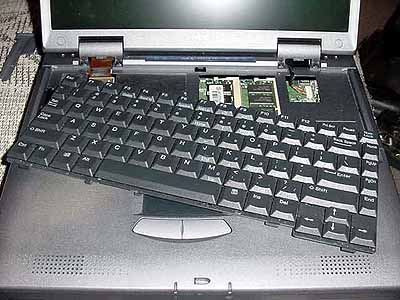 In the picture below, you can see the heatsink plate and how it is connected to the computer’s body. This picture was taken AFTER I put that square dent in the plate. I will be explaining why I had to do that shortly. 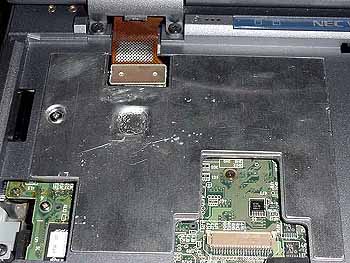 Upon removal of the plate thats located under the keyboard I found (you guessed it), another thermal pad! Now you know why I had to put a square dent in that plate, (to make up for the space after I take the pad out)! 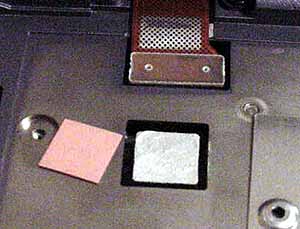 Next I “guesstimated” how far down I would have to make a square dent to touch this chunk of aluminum that was sticking up through the middle of the computer. I ended up taking a 1/2″ extension bar from my tool box and placed it on the other side of where the thermal pad was. I placed the plate down on a 2 x 4 andlinedd up my sights and gave it a good whack! DONE!

Next I put some artic silver paste on the chunk of aluminum sticking up and put the 2 together for a test to make sure they both were touching good. Then I put them back together along with the keyboard. 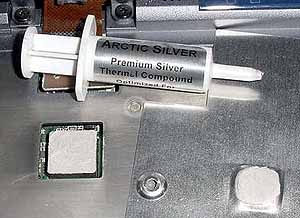 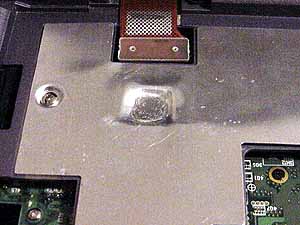 Next I turned the thing on! Don’t get me wrong- I had ALL my fingers and toes crossed, and lets don’t forget about the lucky rabbit foot I’ve had since I was a kid! Will it work? 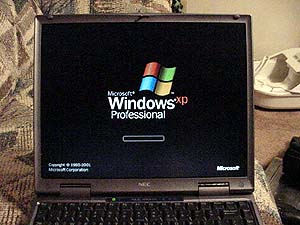 I haven’t done any scientific testing yet (thermal probe, etc..) But, I have noticed that the “tempeture controlled” fan comes on once or twice an hour while surfing the web vs. coming on every 10 minutes or so while doing the same task!

I highly advise that you just EXPECT to end up buying a new CPU if you attempt this! Why do I say this? Well if it doesn’t work, that’s what you’ll be doing! Remember, Overclocking is a HOBBIE and not something you do with your Desktop/Laptop you keep your important files on (budget, business report, etc..)!

EK Waterblocks (EKWB, or just EK) really needs no introduction in the water cooling world. They are a stalwart in the water business and produce lots of good products. While Swiftech may be more well known to those outside the niche, EK has built itself up to be just as viable a solution, from the reservoir, through the pump, block and radiator; including the fittings that bind them all together. Today, we will be looking at their full water cooling kit, the EK-KIT L360. It comes with, quite literally, everything you need to water cool your processor.

Yesterday I had some rare and unexpected free time. Well, I have been wanting to try out an idea that I got after reading John “Hoot” Hill’s cohesive cooling posts in the Forum and his Blower article. I have an