First Impressions – Having a Look at the Glaciators

Picking up a package from the Post Office that was meant to contain two of the best Socket A heatsinks money can buy, I was amazed at the weight of the box given to me. The drive home was far too long! I couldn’t wait to see what was inside such a hefty package!

Ten minutes later, I was home and had two heavy white boxes sitting on my desk. The identical boxes are a normal size as HSF boxes go, and have “Millennium Thermal Solutions” stamped on the front in blue ink. One contained an MTS Glaciator, the original heatsink by Andy Lemont and Co. over at MTS that took the overclocking community by storm with its low C/Ws and even lower price, and the other its evolution, the Glaciator II.

Inside each box was a heatsink, an instruction sheet with some Do’s and Don’ts, installation instructions and a blister pack of Arctic Silver II – a very nice addition!

The heatsinks are both very impressive looking, entirely constructed of almost 100% pure copper, with the fan embedded in the heatsink assembly and a protective grille covering it. Specs for the heatsinks and fans can be found at Millennium Thermal Solutions.

Both heatsinks are constructed from a two-piece design. The base section is 30mm (1.18″) high, with a 5mm (0.197″) thick base and twenty-one 1mm (0.039″) thick fins sticking up out of it. The bottom section appears to have been milled from a solid block of copper. A section has been milled out of the base on one side to clear the socket cam-box, and the base is 3mm (0.118″) thick here.

The top section, in which the fan is situated, is soldered onto the bottom section. Looking at the way it’s been designed, I’m not sure as to how much heat the top section dissipates, or whether it’s mainly for flow-control or noise-control for the fan. 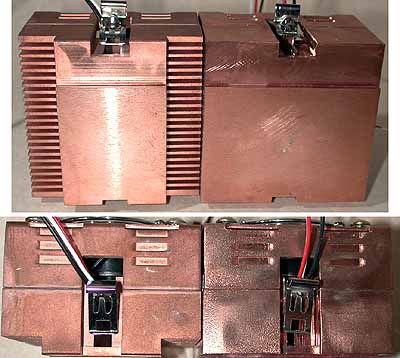 Galciator II left, Glaciator right; the Glaciator shown here has a thermocouple in it – not shipped that way.

Visually and physically, the only difference between the two heatsinks is the base. The base of the original Glaciator is flat, with only the milled section for the cam-box. The base of the Glaciator II has the same smooth finish of the original, but the base on either side of the clip, running parallel to it, has been milled out to a depth of about 7.5mm (0.295″), right into the heatsink fins.

I suggest that the purpose of this move is for weight reduction, as about 10cm³ of pure copper has been removed. This would also allow airflow from the fan to reach the motherboard, so perhaps it helps with secondary cooling of the socket as well.

The fans used appear to be slightly different, but testing will tell if they really are. The clips on both the heatsinks are identical, and let’s hope they’re up the task of keeping such heavy heatsinks firmly on my Thunderbird.

Before receiving the Glaciators, I’d heard all the talk about the weight of these heatsinks and read a lot of surprised – and somewhat worried – Glaciator users, asking if the weight was normal and safe. You can’t really be prepared for the surprise until you hold one in your hand, and I can quite see why so many people have misgivings.

I couldn’t really feel a difference holding them in my hands, so I hauled out the kitchen scale and weighed both heatsinks. I’m not sure how accurate the scale is, but it serves well to illustrate the difference between the two:

This shows that the Glaciator II is indeed a full 100gm lighter than its predecessor. This can only be a good thing in terms of peace-of-mind when using a Glaciator, as they really are very heavy. The installation sheet warns against transporting your PC once the Glaciator is installed, and I can only agree with them.

If you must do so, make sure the PC is laid so that the motherboard is lying horizontally, with the heatsink upright and level, and try not to bounce the case around too much. I’ve been to a few LAN parties since installing the Glaciator, and haven’t had any problems. Just be careful!!

I had serious misgivings about a single clip holding such a beast on the socket properly and managing to exert the correct amount of pressure, but my worries were unfounded. The clip is a pure joy to work with. No extra tools such as pliers or screwdrivers are needed, and the clip on both the Glaciators was one of the easiest I’ve ever worked with. Full marks to MTS for this!!

In my opinion, there’s nothing worse than a heatsink clip that nearly gives you coronary failure every time you have to put it on or take it off (Globalwin take note!).

I had one problem with the Glaciator I received. The fan had not been inserted into the base correctly, and so was touching the fan-grille. I didn’t notice this on inspection, and only found out after installing the heatsink and powering up. I had to remove the Glaciator, take off the grille and push the fan down into the heatsink. It wasn’t difficult to do, but I suggest you check your Glaciator for that problem before installing it. The Glaciator II was fine, though.

Another interesting point is that the narrower base of the Glaciator II is not actually as wide as the pads on Socket A CPUs. The HSF does still rest on the pads, but only on half of each. I thought this might make the Glaciator II unstable on the CPU, especially with its weight, but it didn’t seem to be wobbly or uneven at all. I wouldn’t worry if you too have noticed this.

And On To The Testing!

Of course, the most important part of any heatsink test is the matter of performance.

The heatsinks were tested in exactly the same manner, with the set-up as below:

Core temperatures were measured by a Compunurse temperature probe modified and placed with the thermistor directly against the edge of the core. I believe this method to be almost 100% accurate as far as the CPU core is concerned.

Ambient air temperature was measured using a PIC16F84-based digital thermometer I built, with the probe placed roughly 25mm (1″) away from the heatsink’s intake. The motherboard’s case and CPU core temperatures were also used as a comparison, and MBM5 was used to take them.

The heatsink was installed using the supplied ASII after both the core and heatsink base were thoroughly cleaned with acetone. The computer was left off for 5 minutes after heatsink installation. Then temperatures were taken and the PC switched on. It was left idle in Windows for a further 10 minutes, in which time readings were taken every 5 minutes. Then the following testing procedure was carried out, with measurement intervals of 5 minutes:

The final stage was to leave the PC idle again for 10 minutes, and then temperature was recorded after that.

The above procedure was used for both heatsinks, and the results are given below. Temperatures are averages of the readings taken and are in degrees Celsius.


Alpha PEP66 Mod For Socket Use

SUMMARY: Very quiet, but very subdued performance; Lasagnas are great coolers for GPUs and Northbridge chips but needs serious steroids to be of real interest as a CPU overclocking cooler. TennMax makes a great little CPU/chip cooler called the TennMax