MSI has just announced two new motherboards in preparation for the upcoming AMD Ryzen 5000-series CPU’s. The MEG B550 Unify and Meg B550 Unify-X are geared towards serious overclockers boasting new world records once again. Equipped with the B550 chipset, both models are compatible with Ryzen 3000 and 5000 series processors(except Ryzen 5 3400G and Ryzen 3 3200G).

The MEG B550 Unify is loaded with features. There are four M.2 connectors, three of which have the lightning-fast Gen 4 capabilities. The included heatsinks are double-sided for maximum cooling. Overclocking is made possible due to its direct 14+2 power phases and beefy 90 Amp power stages.

The MEG B550 Unify-X is for the extreme overclocker and only features a pair of DDR4 slots. This is said to yield a clearer memory signal and allow for increased memory overclocking.

The retail price has not been released as of the time of this article, but expectations are for them to be in around the $250-$300 range, right around where the current MEG X570 Unify boards sit. Here is MSI’s official press release.

[Taipei, Taiwan] – MSI, a world-leading gaming motherboard manufacturer, proudly announces the new flagship AMD B550 motherboards – MEG B550 UNIFY and MEG B550 UNIFY-X. The spirit of the UNIFY series consists of modest and pure black design, emphasizing the real value of the motherboard that can be brought to the demanding gamers and power users instead of fancy LED decorations. By eliminating all the redundant RGB LEDs and adopting the UV black printing, the heatsink shows the gleam and the shining reflection of the dragon that symbolizes a mysterious and high-quality image. For the UNIFY series motherboard, MSI put great efforts into those essential parts concerned by those enthusiast gamers, enhancing not only the thermal but also power solution to run with the AMD Ryzen processors. 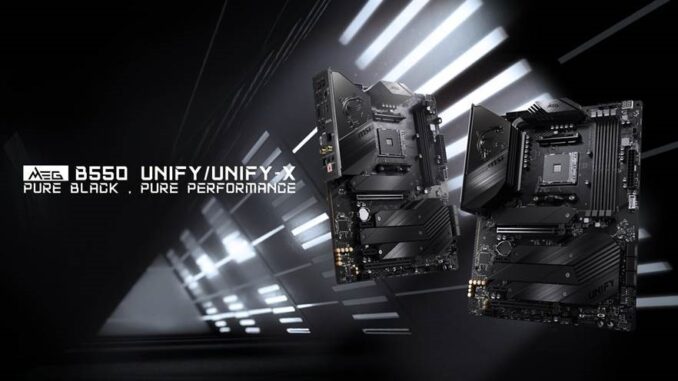 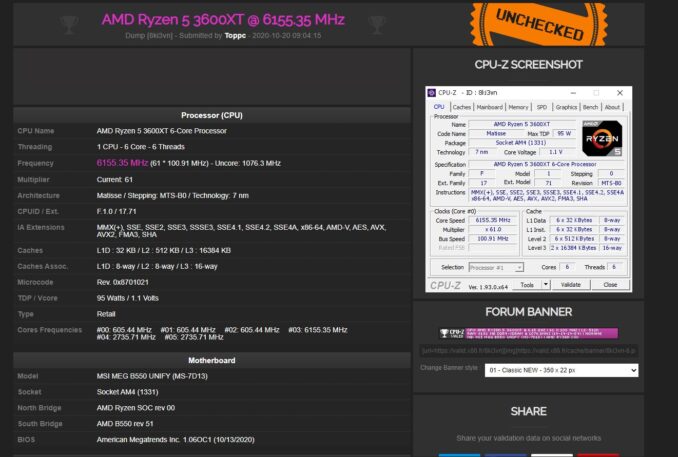 MEG B550 UNIFY series motherboard features exclusive onboard quadruple M.2 connectors for the maximum storage performance. Three of them support Lightning Gen 4 solution which is the fastest onboard storage on the market with up to 64 Gb/s transfer speed. 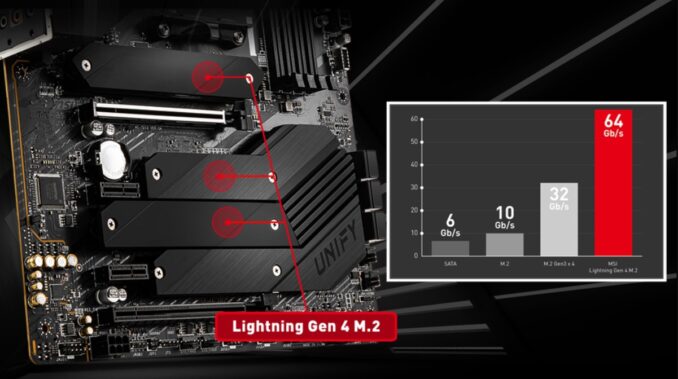 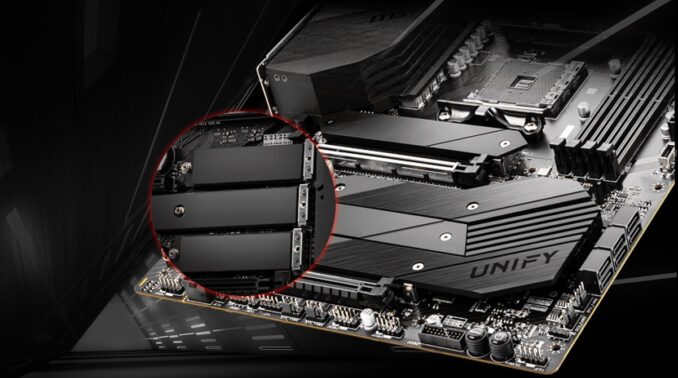 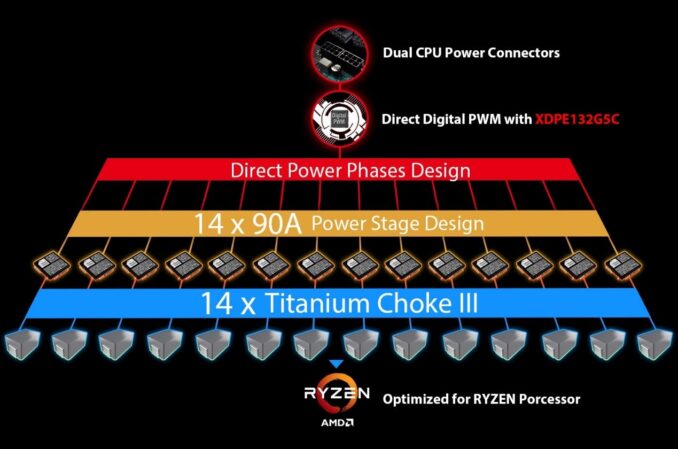 Cooling is what an enthusiast gamer would care about and the MEG B550 UNIFY series motherboard adopts a premium thermal solution to cool down your system. An aluminum cover with an extended heatsink on top of the power delivery circuits can effectively help dissipate excessive heat. Other than that, a heat-pipe connected from this larger heatsink to another MOS heatsink and an improved thermal pad means better heat conduction. 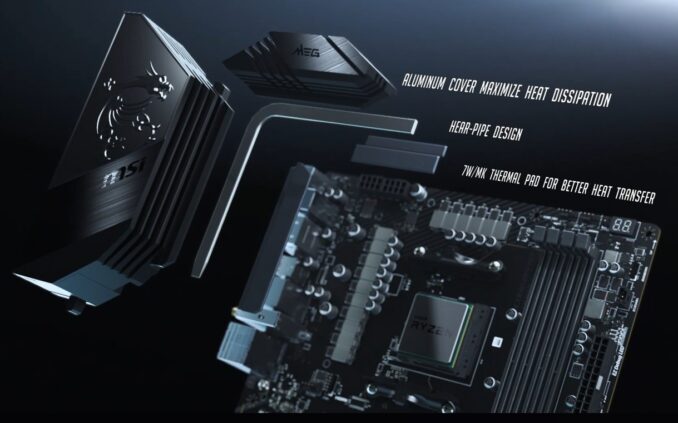 MEG B550 UNIFY series motherboard features onboard 2.5G LAN plus the latest Wi-Fi 6 AX solution. 2.5G LAN provides incredible data transfer speed faster than ever before. The Wi-Fi 6 AX solution is a revolutionary network with up to 4x network capacity and efficiency in high signal density environments.

The MEG B550 UNIFY offers 4 DIMM slots, but there is a special edition for extreme overclockers – MEG B550 UNIFY-X. This model comes with only 2 DIMM slots for an even clearer memory signal to explore the boundaries of memory overclocking and is ready to surpass all limits! 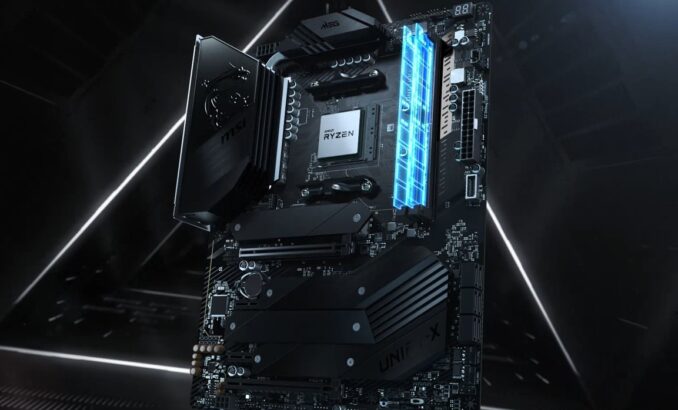 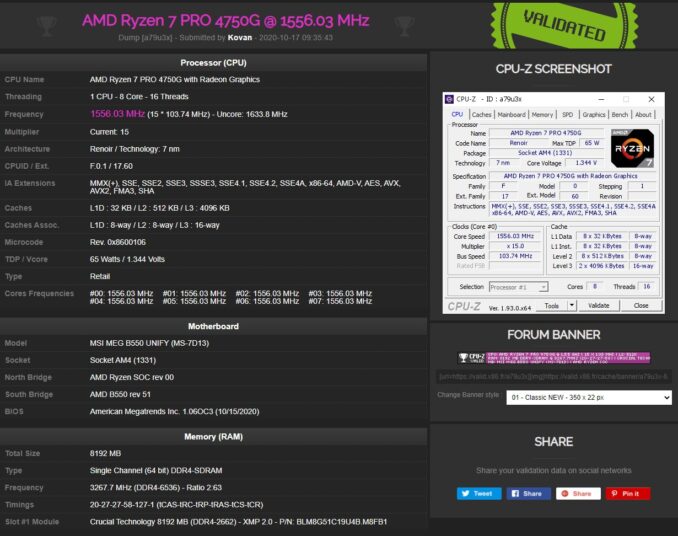 MSI announced today the release of their CPU Guard 1151 product to combat potential CPU bending when using heavier coolers. With the substrate of Skylake being thinner than that of the previous generation Haswell CPUs, larger coolers, specifically ones going beyond Intel’s 50 lb. pressure specification have been doing some damage. If you’re concerned, stick with spring-mounted heatsinks rather than bolts, or get yourself MSI’s CPU Guard 1151 shim.

Team Group recently released its answer to the ever-growing problem of XMP memory compatibility on AMD X570 series motherboards. Deriving it’s name in part from the Greek alphabet, the new T-Force Dark Zα, or Z-Alpha is poised to make a big splash in the AMD memory market. Team Group’s marketing assures that this memory has been tailor-made for the current generation AMD platform. We are going to put that claim to the test, as well as see what this memory has to offer in terms of overclocking headroom. Come join us as we explore this memory and see what it has to offer.

Arctic is one of the most well-known manufacturers of heatsinks for both graphics cards and processors, as well as a popular producer of thermal paste and case fans. In this review we will be looking at Arctic’s flagship air graphics heatsink, the Accelero Xtreme 7970.

Nice read, thanks. I've been looking for a board to buy and these might be it. B550 but the specs seem to read like a X570. Also, paper launch so far it seems, as I cannot find them in stock anywhere. Got a bit confused because it seems there's a X570 Unify series as well. I'll be curious to see what price point they drop in at. If it's dead close to the X570s then there'll have to be a hard comparison on which is more worth it.

I've purchased the X570 Unify after reading about B550 Unify/X. Prices for some reason will be not much different and when I buy full ATX motherboard then I expect to use some more PCIe slots and other things. For memory and CPU OC I can use cheaper motherboards with the same or not much worse effect.

Nice read, thanks. I've been looking for a board to buy and these might be it. B550 but the specs seem to read like a X570. Also, paper launch so far it seems, as I cannot find them in stock anywhere. Got a bit confused because it seems there's a X570 Unify series as well. I'll be curious to see what price point they drop in at. If it's dead close to the X570s then there'll have to be a hard comparison on which is more worth it.

Gabber, this article was a product announcement and not an actual launch. That's why you haven't found these yet. I don't know when they will actually launch unfortunately, though I do expect it to be very soon. It's more than a little curious to me why they would manufacture such a high-end 'extreme' overclocking board on a lower than top tier chipset. With pricing expected to be only slightly lower, I would make the assumption that it would be marketed towards competitive benchmarking for those who don't have a need for Gen 4 lanes.

For some reason B550 motherboards are overclocking memory better than X570. This is probably why MSI makes X series on B550 chipset. CPU performance is the same. Maybe it's less complicated and easier to provide clean signal, I'm not sure. X570 is heating up more and costs more so getting B550 is a win for both sides... as long as it will sell with high enough margin for the manufacturer and low enough price for end-users.
All manufacturers are adding something for the Ryzen 5000 premiere. ASUS released two new motherboards, ASRock one and probably Gigabyte will show something soon too... but they recently refreshed most of their line marked as V2. I only don't get these mobos with one PCIe x16 and 4 M.2 sockets. The same has ASUS. I mean who needs 4 M.2 sockets on a motherboard like this. They could make high-end micro ATX with B550 chipset as there are not many good mATX mobos for AMD.