CHARGE AHEAD WITH SPEED

[Taipei, Taiwan] MSI is announcing the launch of its solid state drive (SSD) product line with the introduction of SPATIUM. The initial product offering will include M480, M470, and M370, which are Gen4 & Gen PCIe NVMe SSDs in compact M.2 2280 form factors that can be installed into compatible desktop motherboards and laptops.

MSI continues to refine its identity as a high-performance PC brand and SPATIUM was envisioned to expand our ecosystem and cover the high-performance storage category. These SSDs are built with high-quality, high-density 3D NAND flash that deliver the best compromise of performance and endurance for professionals, content creators, and gamers. Among the performance improving technologies include a DRAM cache buffer for M480 and M470, and a SLC cache for all announced models. 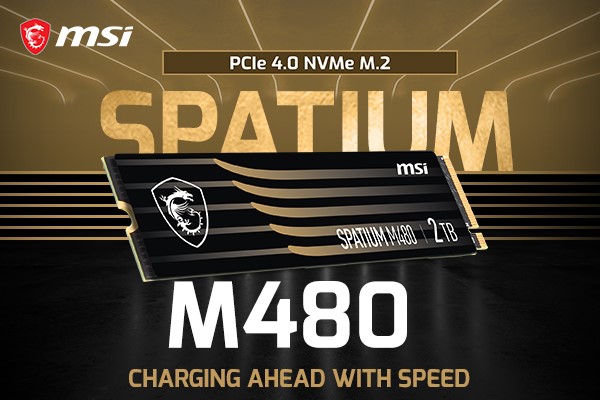 SPATIUM M480 brings next-level storage performance to demanding content creators and gamers. Compliance with PCIe Gen 4 and NVMe 1.4 standards unleash the latest in extreme transfer speeds up to 7000MB/sec sequential read and 6850MB/sec sequential write speeds. M480 will be produced in three storage capacities – 500GB, 1TB, and 2TB. These SSDs are the fastest in the entire SPATIUM lineup.

SPATIUM M470 was developed to meet the expectations of mainstream SSD consumers. Blazing fast speeds up to 5000 MB/sec sequential read and 4400 MB/sec sequential write speeds allow users using the latest generation of PCs to enjoy the capabilities of the PCIe Gen4 interface. Available storage capacities are 1TB, and 2TB.

All of the announced SPATIUM SSD products support a comprehensive range of data error correction features including LPDC ECC and E2E Data Protection, providing a high TBW (Terabytes Written) for excellent durability and longevity. A limited 5-year warranty backs these products and MSI is ready to assist customers in most global regions.

In recent years, ADATA has gained recognition as one of the global leaders of DRAM memory and Flash application products. They recently launched two new fast PCI-Express x4 3.0 NVMe 1.3 drives, which push the performance per price boundary. The FALCON and SWORDFISH come in at just 13 and 12 cents per gigabyte respectively. Despite the remarkably low price, performance is still quite good. They even managed to include a stylish heatsink to help with thermal throttling and add a little bling to your build.

The time is finally here for all you enthusiasts that love bleeding edge hardware! That’s right, Intel’s Haswell has finally hit the scene and with performance that most expected with a similar jump in per clock performance as was Sandy Bridge to Ivy Bridge. But what is an(y) Intel CPU without a board to support it? Today we will give you a look at one of MSI’s higher end motherboards on the Z87 platform (Lynx Point) chipsets, the MSI Z87 MPower MAX. The board is made for overclocking with a lot of its features, but looks to please a more broad market than that. Let’s put it through its paces and see how things work out!