SUMMARY: A thermal epoxy adhesive is required for cooling a chipset, GPU or RAM. In this article, I show how to make a thermal adhesive with CoolingFlow thermal compound and an epoxy adhesive. 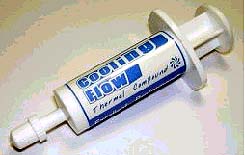 My idea is that

For this, thermal compound is mixed with the epoxy adhesive.
For mixing, a disposable aluminum bowl is used because it is very cheap.

I thought of various test methods for testing the thermal adhesive. This picture shows a simple test device. Because the adhesive is permanent, GPU of VGA or CPU was not used. This device shows the comparisons of two thermal adhesives. From the heat source, a gas burner, heat is supplied to the copper rod 1. The heat flows from rod 1 to rod 2 and rod 3 through the thermal adhesive 1 and 2.

The digital thermometers display temperatures of rod 2 and rod 3. If the thermal adhesive is bad as an insulator, the temperature is almost the same as the ambient temperature.

This picture shows the device for comparisons of the thermal adhesives

For the comparison, ArticSilver adhesive is used.

From the heat source, heat is supplied to the copper rod. The copper rod will be hot. The heat flows through the thermal adhesive and ArticSilver adhesive to copper rods. 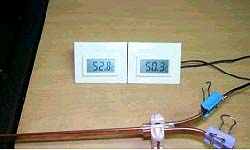 This picture shows the temperatures of rod 2 and rod 3. Left displays temps for CoolingFlow adhesive and right is for ArticSilver.
You can get a more conductive thermal adhesive by increasing the thermal compound in the mix.

Since we’ve pounded AMD plenty when they make technically accurate but misleading statement, it’s only fair to whack Intel when they do the same. The other day, Hardware.fr indicated that Penryn Yorkfields would be delayed four to six weeks from

Cheating: The Other Side

(Ed. note: He didn’t request to be anonymous) Hello, I’m almost 20 years of age and last semester my roommate got me hooked on playing CounterStrike. I’m talking seriously hooked, like 30 hours a week easily. Through so much effort

Yesterday, we covered the major financial points made at the analyst meeting. We then put high finance on the backburner since the company isn’t going to go under anytime soon, which is all most reading this are concerned about. However,